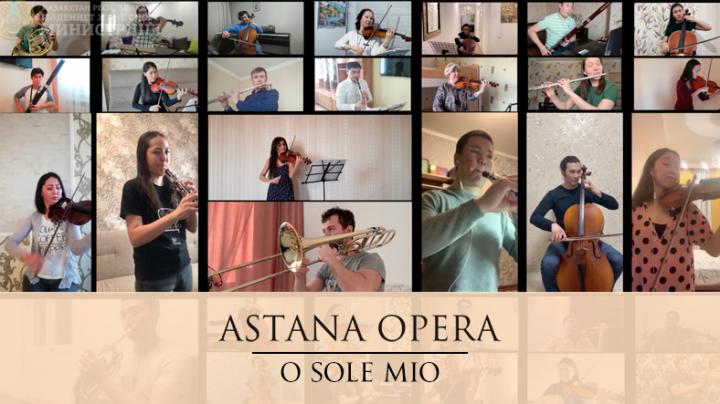 Davide Livermore, a sought-after director who staged many productions at major opera houses, including Teatro alla Scala in Milan, Teatro dell’Opera di Roma, Teatro Regio di Torino, Teatro di San Carlo in Naples and many others, took part in the project with enthusiasm. It is worth noting that the maestro staged a number of productions at Astana Opera that aroused great interest in the international arena.

It is worth noting that international celebrities who took part in the creative project have been to Kazakhstan and performed at the Astana Opera.

“I have such wonderful memories from the Operalia competition in the Astana Opera House in 2017. Everyone was so kind, so helpful. You have such a wonderful opera house and every time I think about that experience; it puts a big smile on my face. I hope that right now you are healthy, that you are safe. And I hope that we will all meet soon again, sing together and be happy that the sun is shining again on our street. Take good care of yourselves,” Adela Zaharia, Romanian singer with the purest soprano voice, said.

Let remind that in 2017, she became a real sensation at the prestigious Plácido Domingo’s Operalia, The World Opera Competition, having won the First Prize and The Pepita Embil de Domingo Prize for the Best Female Singer of Zarzuela.

The performers chose Neapolitan song ’O Sole Mio for good reason. It brings positive energy, joy and gives great hope for a wonderful future. The composition was written in 1898 by Eduardo Di Capua (music) and Giovanni Capurro (lyrics). Back then this work gained immense popularity and was subsequently translated into many world languages.

All participants in the project believe in the amazing power of art, which is able to raise people’s spirit, inspire confidence that we will soon be able to overcome difficulties and defeat the dangerous virus.

The project was created with the support of the Ministry of Culture and Sports of the Republic of Kazakhstan.