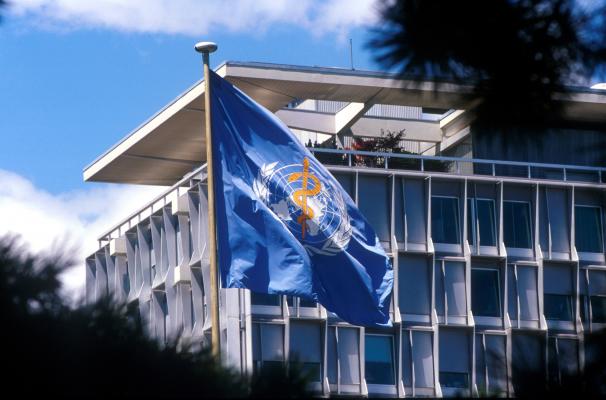 “Globally, the numbers of weekly COVID-19 cases and deaths have stabilized this week, with over 2.7 million cases and over 46,000 new deaths, a 4 percent and 2 percent decrease respectively, representing similar numbers as those reported last week. With the exception of the European region, which for the third consecutive week reported an increase in new COVID-19 cases (7 percent increase as compared with the previous week), all the other regions reported a decline,” said the update. 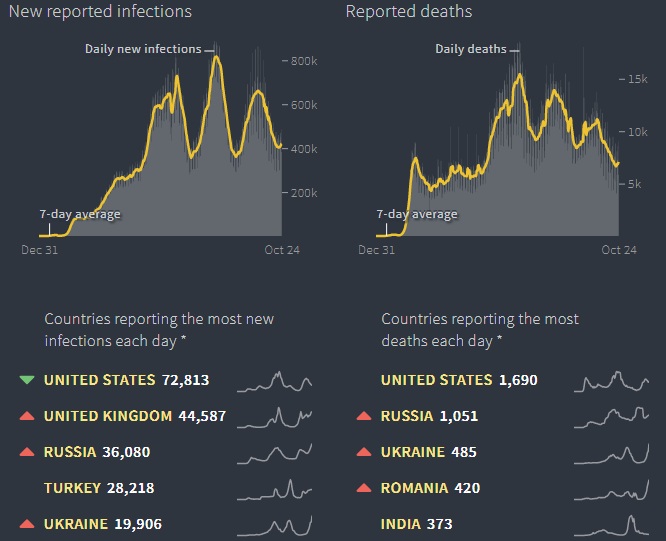 The number of new weekly deaths reported globally is also stabilizing decreasing by two percent as compared with the previous week.

Russia continues to see the highest number of daily cases. Vladimir Putin announced a week-long holiday between October 30 and November 7 in an effort to curb the spread of infection. Over the past 24 hours, Russia reported 37,930 new confirmed cases and 1,069 COVID-19 deaths.

Moscow will go into lockdown earlier from October 28 with nonessential businesses halting the work. During this period, theatres and museums will only be accessible to people with a health pass that shows proof of vaccination or recent recovery from COVID-19. The document will be required for all events of more than 500 people starting from November 8.

Eastern Europe, where Russia is, demonstrates grim statistics, with Romania and Ukraine seeing their cases rising. Eastern Europe has more than 20 million cases, according to Reuters. Russia, Ukraine, and Romania report the highest number of deaths reported daily. 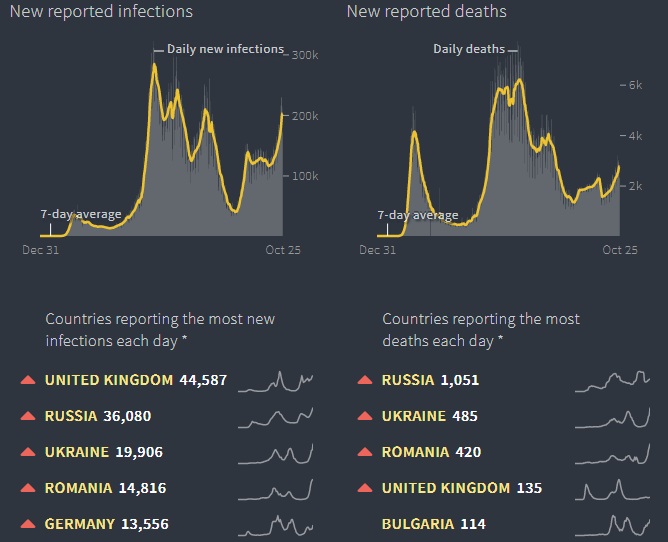 China also announced it will tighten restrictions amid the spike in infections. China tightened restrictions in some areas of Beijing and northwestern regions. Residents of the Changping District of Beijing were ordered to stay home, as schools suspended their face-to-face classes and businesses stopped their work. China also suspended all train services around the country that are related to tourism.

The United States, which has the world’s highest death toll, has removed international travel restrictions, said U.S. President Joe Biden in his statement published on the White House website. Starting November 8, prior to flying to the US, passengers, who are non-citizens and who are not immigrants, will have to provide proof of their vaccination status. The documents will be checked by airlines, as before.

Accepted vaccines include the FDA-approved or authorized and WHO Emergency Use Listed vaccines, except for Sputnik V.

Children under 18 and nationals of countries where the total vaccination rate is less than 10 percent are exempted from this requirement.

“In light of these facts and circumstances, I have determined that it is in the interests of the United States to move away from the country-by-country restrictions previously applied during the COVID-19 pandemic and to adopt an air travel policy that relies primarily on vaccination to advance the safe resumption of international air travel to the United States,” said Joe Biden.

Kazakhstan has seen its COVID-19 situation stabilizing, said Kazakh Healthcare Minister Alexei Tsoy. Since the pandemic began, the country had more than 931,000 confirmed cases and more than 78 coronavirus pneumonia cases, according to coronavirus2020.kz.

At a government meeting on Tuesday, he spoke about how the situation may unfold.