What do we need to know about COVID-19 vaccine?

Arrival of vaccines globally might be a beam of hope when the world has been struggling from the coronavirus crisis. Take a look at what we should know about the COVID-19 vaccine in a Strategy2050.kz latest coverage. 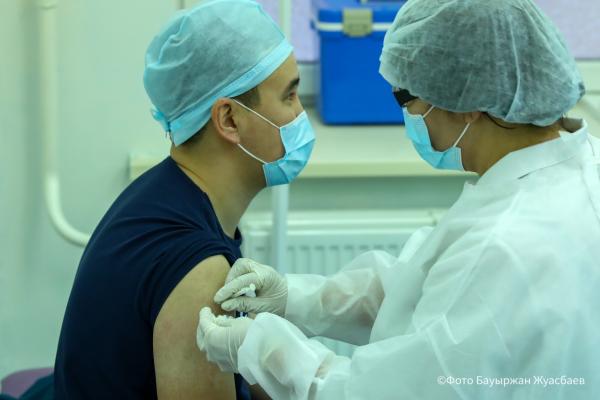 More than 119 million doses have been administered by 67 countries, according to data provided by Bloomberg.

“Globally, the latest vaccination rate is 4,540,345 doses per day, on average. At this rate, it will take an estimated 7 years to cover 75 percent of the population with a two-dose vaccine,” wrote Bloomberg.

Despite some scepticism towards vaccination and how fast the vaccines were developed, many countries repeatedly emphasize safety is a top priority and vaccination is now the only way out of the public health crisis the world has been in since last year.

“According to the World Health Organization, more than 200 vaccines are being developed, 54 are in clinical trials,” Deputy Director of Sanitary and Epidemiological Expertise and Monitoring Centre at the National Centre for Public Health Manar Smagul said in an interview to a Strategy2050.kz correspondent.

Kazakhstan started mass vaccination with Russia’s Sputnik V vaccine on February 1 and the officials repeatedly emphasized the importance of vaccination.

“Our World in Data website of the University of Oxford conducted a survey about vaccination and based on the results, a very high attitude to vaccines is shown in the United Kingdom, and the EU countries. I would like to say that we need to understand that vaccine is one of the most effective methods to protect from coronavirus,” she said.

The effectiveness of Sputnik vaccine is estimated at 91.4 percent and the immunity developed by the vaccine could last up to two years.

“As for safety, before getting registered, any vaccine passes through check and examination as part of several stages of trials, and only then it is authorized. I would like to note here regardless of how fast the vaccine is produced, the biggest requirement is its safety. After the vaccine is put in use, the monitoring is continued among people. So when we talk about safety, we can be sure it passed all the stages,” said Smagul.

There has always been skepticism among some groups of the population, she added.

“We need to take into account these are new vaccines and due to lack of information, and lack of awareness raising, there might be such sentiments. We always fear those things we do not understand. The healthcare ministry focuses on awareness raising efforts on the use of vaccines against COVID-19,” she said.

Speaking at a press briefing on February 3, Kazakhstan’s Vice Minister of Healthcare and Chief Sanitary Doctor Yerlan Kiyasov, who was among the first to receive the vaccine, said it is important to cover as many people as possible with vaccination.

To develop a herd immunity, nearly 60 percent of the country’s population should get a jab.

“This will enable us to cope with the coronavirus situation and go back to a normal life without quarantine, stabilise the economy, return children to kindergartens and schools, and students to lecture halls and in general, return to safe communication with family and friends, colleagues and friends,” said Kiyasov.

He warned the citizens to be cautious with fake information spreading online about vaccination.

“Vaccination has many times proved its effectiveness in the fight against infections, reducing the incidence rate to almost zero. Today, it is the most effective measure of protection against immunoprophylactic controlled infections and the only alternative to quarantine and self-isolation," he said.

Kiyasov said there were no other variants found in Kazakhstan.

People with a history of severe allergic reactions to any component in the vaccine should not vaccinate.

People who are breastfeeding and pregnant shall not take vaccines as well.

As for children, the current research and testing has only been done on people over the age of 16.

People with clinically confirmed chronic conditions are recommended counselling before getting a vaccine.

Experts warn feeling side effects is normal and it shows that a body is building its immune protection against the infection. According to experts, such effects as fever, tiredness and headache are normal and should go away in a few days.

“Vaccination is a simple, safe and effective option to protect people from infectious diseases and is used to increase resistance to certain diseases and strengthen the immune system. Vaccine builds antibodies, and because vaccines consist of weak or inactivated particles they do not cause infection and do not risk implications,” said Smagul.

The United States and the European Union

In the United States, U.S. chief medical adviser Anthony Fauci said on Tuesday nearly 75 to 80 percent of the population should be vaccinated against COVID-19 (two doses) to develop a herd immunity. Currently, the figure is less than 2 percent.

The country has so far administered more than 35 million doses, which surpassed the number of cases in the country.

In the European Union, the vaccination campaign is well underway that started in December 2020 and so far only 3 percent of the population received the first dose.

The two companies producing AstraZeneca, and Pfizer-BioNTech, have their production facilities in the EU.

EU countries are also taking different measures to fighting the surge in cases, where some countries, including Italy and Poland, ease restrictions, and others, including Germany and Netherlands, keep restrictions in place amid the emergence of new variants.

In Asia, the pace of vaccination, however, is not as massive, where only China and India have gone the farthest due to their extensive production capacity. In India, which has the second highest number of cases worldwide after the United States, two vaccines were approved for use - one developed by the Oxford University and AstroZeneca, and the second Covaxin developed locally.

China has been using the vaccines developed by domestic companies Sinopharm and Sinovac and has so far administered nearly 24 million first doses.