What did President talk about at Government’s extended session?

The extended session of the Government under the chairmanship of President of Kazakhstan Kassym-Jomart Tokayev was held today via videoconference. The Head of State touched upon the most important and topical issues related to the fight against the coronavirus infection, Kazakhstan’s socioeconomic development, the progress in implementation of the instructions given by the him regarding the key areas of Government’s activity and the goals for the period ahead. Read more details in the material by the Strategy2050.kz correspondent. 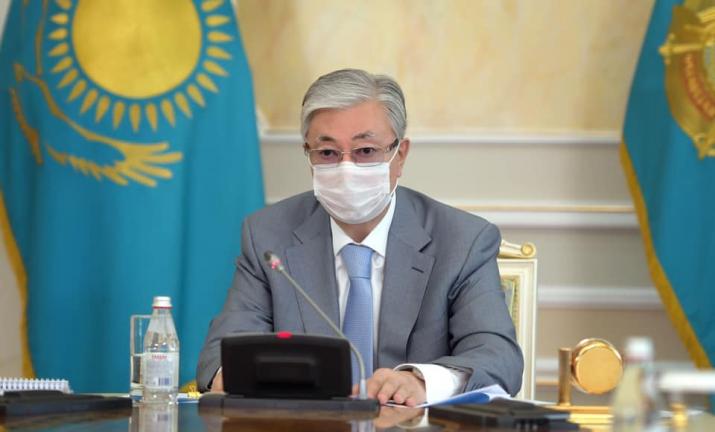 The Head of State started his speech from the instruction to dismiss the heads of the Compulsory Medical Insurance Fund and “SK Pharmacy”.

Then the President instructed the Government and the National Bank to work out a package of additional measures to support industries and the population in case the situation worsens.

“There is money to fight the crisis. The necessary legislative decisions have been made. Therefore, volume lowering in manufacturing, construction and investment is considered unjustified. The Government needs to correct the situation”, the Head of State said.

According to the Head of State, first of all, it is necessary to ensure the effective implementation of already adopted anti-crisis decisions.

“It should be borne in mind that the introduction of new quarantine measures can complicate the situation in the economy. The Government should have an appropriate action plan”, the President said.

Kassym-Jomart Tokayev added that Kazakhstan lies in the budget cycle and there is a possibility to determine financial priorities. Economy and employment are the main things.

“I instruct the Government and the National Bank to work out a package of additional measures to support industries and the population in case the situation worsens. At the same time, state support should be aimed at maximizing the effect”, the President stated.

“I consider it necessary to ensure that inflation is kept within 8-8.5% by implementing a more effective monetary policy”, the Head of State said.

In this regard, the President instructed the Government, together with the National Bank, to intensify work on the development of the government securities market and joining international indices.

“This will increase the attractiveness of tenge assets for foreign investors, reduce the cost of borrowing and give impetus to the development of the financial market”, Kassym-Jomart Tokayev said.

In addition, Tokayev noted that the stability of the financial system is an important issue.

“The National Bank considers the financial system to be quite stable. However, there is an increase in the sphere of consumer lending, loans to the real sector of the economy are not growing. I gave instructions to the Agency and the National Bank to increase the credit availability for business”, the Head of State concluded.

In terms of maintaining employment and wages Kassym-Jomart Tokayev instructed the Government and the Atameken National Chamber of Entrepreneurs to complete work within 2 months to ensure digital control of counter obligations of the business.

The President noted that quarantine and lower oil prices led to a sharp reduction in budget revenues.

“Losses of the republican budget revenues for 2020 are estimated at 1.7 trillion tenge. Now, the budget stability is achieved through transfers from the National Fund”, Tokayev said.

The President recalled that for this year the size of the guaranteed transfer from the National Fund was increased to 4.7 trillion tenge.

“Starting from 2021, transfers from the National Fund should be only targeted. They can be aimed solely at solving social problems and infrastructure development”, the Head of State emphasized.

According to the President, a decrease in the number of operating SMEs occurred in 8 regions. The greatest reduction is noted in East Kazakhstan, Akmola and Kostanay regions, while supporting for domestic producers is a key element of the anti-crisis actions of the state.

“In each region, this issue should be personally assigned to a Deputy Governor”, the President emphasized.

Kassym-Jomart Tokayev noted that at the end of the year, the Government and the President’s Administration will assess their work and the region as a whole.

“The issue of local content should be considered on a monthly basis at the Commission for the Rehabilitation of Economic Growth”, the President said.

The Head of State paid attention to environmental issues that are becoming increasingly relevant from a social point of view.

“More than 5 million tons of municipal solid waste are generated each year. The share of their processing in the country is only 15%. This is not enough”, Kassym-Jomart Tokayev said.

In this regard, the President instructed the Government to expeditiously provide the legislative framework and favorable investment conditions for the implementation of the Waste to Energy technology.

This technology offers many reliable solutions for thermal waste disposal. This significantly reduces waste disposal at landfills, such as municipal solid waste, industrial and sewage sludge, medical and hazardous industrial waste. Generated energy is an additional source of income that brings economic benefits to society and environmental benefits in the form of cleaner air, water and soil.

In addition, the Head of State drew attention to the problem with landfills around settlements.

“Problems with natural dumps around settlements are not being resolved. Conducting one-time raids, imposing fines, environmental month’s campaigns give little effect. We need systematic work from the Ministry of Ecology”, Tokayev instructed.

The President noted that it is necessary to introduce a subject at schools - environmental education of children.

According to the Head of State, the current epidemiological situation is of great concern to everyone.

The President has said that the country is dealing with the difficult situation, adding that there are some improvements.

Last week saw the President giving the instructions to the Government and the governors of the regions. According to the President, the State Commission established to curb the spread of the coronavirus infection has been working to improve the current epidemiological situation.

According to the Head of State, 150 billion tenge has been channeled to deal with immediate problems during the pandemic. The funds have been provided from the government and regional budgets.

However, President Tokayev warned he might dissolve the Government or change its composition, if the situation with the coronavirus infection would not have improved in two weeks.

According to him, Kazakhstan's social and economic development entered a critical phase. He said that actions by the Kazakh Government and Governors are needed to solve this crisis.

“These expectations are projected for the world economy of which Kazakhstan is a part”, the President concluded.