Victory Parade over in Moscow

About 14,000 troops, over 200 latest and WWII military hardware and 75 aircraft took part in the military parade on Moscow’s Red Square devoted to the 75th anniversary of the Soviet Union’s victory over Nazi Germany in the 1941-1945 Great Patriotic War, Strategy2050.kz reports referring to TASS. 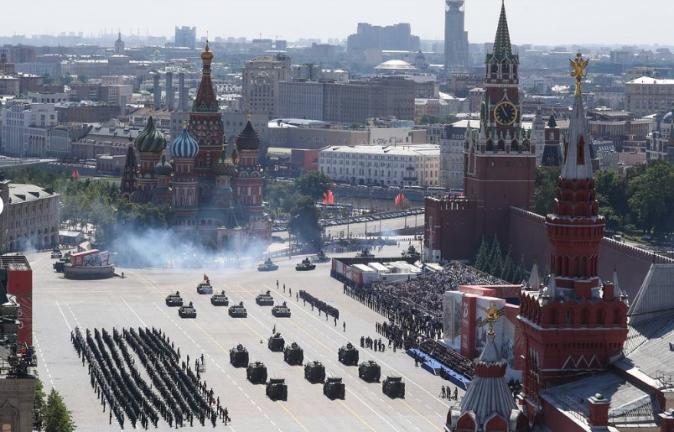 "Attention, this is Moscow speaking and showing. Listen to and watch Red Square. This is the Victory Parade in honor of the 75th anniversary of the Victory in the 1941-1945 Great Patriotic War!" the speaker announced opening the event. These words traditionally begin military parades in Russia in honor of the victory over Nazi Germany.

The banner-carrying group of the guard of honor battalion of the Preobrazhensky Regiment brought the Russian flag and the legendary Victory Banner, which had been hoisted over the Reichstag by the combatants of the 150th Idritsa division in 1945, to Moscow’s Red Square.

The parade was being reviewed by Russian President Vladimir Putin, war veterans and guests.

During his address from the central tribune on Moscow’s Red Square, President Putin said the future of the world could not be imagined, hadn't the Red Army defended it.

"It is impossible even to imagine what would have become of the world, if the Red Army had not come to its defense," the head of state said.

"Its soldiers [the soldiers of the Red Army] needed neither the war nor other countries, nor glory, nor honors. They strove to crush the enemy, achieve the victory and return home. And they paid an irretrievable price for the freedom of Europe," Putin stressed.

Many hundreds of thousands of Soviet soldiers fell in a foreign land, the Russian leader said.

"Our duty is to remember this and remember that the Soviet people bore the brunt of the struggle against Nazism," Putin said.

"It was our people that defeated the terrible, total evil," the Russian leader stressed, adding that Russia would never forget the contribution by the allies in the anti-Hitler coalition to achieving the Victory and the importance of the second front opened in June 1944.

"We know and in the face of the challenges our planet is confronted with we feel especially acutely what the greatest value is: an individual, his dreams, joys and hopes; a peaceful, calm and creative life," Putin said.

As Russian Presidential Spokesman Dmitry Peskov said on June 23, the Kremlin treats with understanding the situation that some foreign leaders were unable to come to the Victory Parade in Moscow due to the restrictions introduced over the coronavirus pandemic.

The parade's historical part was opened by the units carrying the banners of 10 war fronts before the tribunes. They were followed by the servicemen who marched in the war-time uniforms of the infantry, pilots, sailors, engineers, scouts, border guards, and also by the units of the people’s volunteer corps and Cossacks. They marched with war-time small arms in their hands: Simonov self-loading carbines and Mosin rifles, Shpagin and Sudayev submachine guns.

They were followed by servicemen, students and cadets of military educational institutions, cadets of Suvorov infantry and Nakhimov naval military schools, cadets and Young Army Movement members, and also by formations of the Federal Security Service, the Emergencies Ministry and the National Guard and Kremlin cadets.

The legendary Soviet T-34 tanks and SU-100 self-propelled artillery guns rolled through Moscow’s Red Square along with the latest weapon systems at the military parade devoted to the 75th anniversary of the Soviet Union’s victory over Nazi Germany in the 1941-1945 Great Patriotic War.

Along with the well-known combat vehicles, about 20 latest weapon systems rolled through Moscow’s Red Square during the military parade. Some of them were never demonstrated to the public before. Specifically, Russia demonstrated for the first time TOS-2 ‘Tosochka’ heavy flamethrowers, ISDM remote mine-clearing vehicles, Kurganets-25 infantry fighting vehicles with a combat module and a 57mm gun and upgraded Pantsyr-S1M surface-to-air missile/gun systems with small-size anti-drone missiles.

The mechanized column also featured Tigr-M and Taifun-K military police armored vehicles that are currently being used by Russian patrols in Syria. The National Guard’s hardware was represented by Patrul and Ural wheeled armored vehicles and also by Tigr special armored vehicles.

The latest Bumerang armored personnel carriers with the banners of all the military branches of the Russian Armed Forces concluded the mechanized column’s procession at the Victory Parade on Moscow’s Red Square.

The Victory Parade on Moscow’s Red Square was concluded with the flyover of 75 aircraft and helicopters.

MiG-29 multirole frontline fighters and Su-24 frontline bombers flew next in the parade formation. They were followed by two groups of the latest MiG-31K interceptor-fighters and fifth-generation Su-57 multirole fighter jets.

After that, "a tactical air wing" of ten aircraft flew over Moscow’s Red Square, followed by the world’s renowned Russian Knights and Swifts aerobatic teams.

The air parade was concluded by six Su-25 attack aircraft. They exhausted special fumes in the colors of the Russian national flag.

New date for the parade

Russia postponed its military parade traditionally held on Moscow’s Red Square on May 9 for a later date due to the coronavirus pandemic.

At a video conference with Defense Minister Sergei Shoigu on May 26, Russian President Vladimir Putin announced that the anticipated Victory Parade would be held on Moscow’s Red Square on June 24.

The head of state explained he had chosen this date because June 24 was the day when in 1945 the legendary historic parade of victors took place, when soldiers, who fought for Moscow and defended Leningrad, who stood their ground for Stalingrad, liberated Europe and stormed Berlin, marched on Red Square.

The Russian president instructed the defense chief to make sure that there weren’t any risks to the health of the military parade’s participants.