More than 733,980 people have received at least one dose of the vaccine against coronavirus infection in Kazakhstan as of April 20, reports a Strategy2050.kz correspondent. 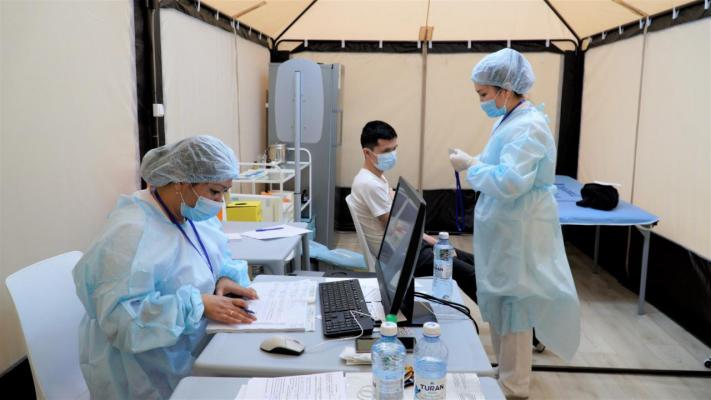 It seems there is a beam of hope after the news came from Israel where vaccination reached more than 80 percent of the population and the government lifted some of the stringent restrictions. As Israel’s example shows, vaccination can help return to some kind of normalcy.

This is what the government of Kazakhstan also tries to achieve, where more than 733,980 people got the first dose of the vaccine and 122,906 have been fully immunized against the coronavirus infection.

“Around 188,000 doses of the vaccine are currently available in the regions. Vaccines are being delivered in phases according to the schedule. Vaccination rates have been stepped up and vaccination coverage has increased to over 70,000 people per day. The daily vaccination plan is monitored in the regions,” said Tsoy.

Researchers at the Kazakh Biosafety Institute in the Zhambyl Region have also been developing their QazVac vaccine. Phase III of clinical trials is expected to be completed on July 9 this year.

At a press conference in the Central Communications Services on April 14, Kazakh Vice Healthcare Minister Marat Shoranov said more than 923,000 doses of Sputnik V vaccine have been delivered to the regions since the beginning of April and an additional 910,000 doses are expected to be delivered until the end of the month.

Shoranov also said 500,000 doses of other vaccine producers are expected, though he did not specify the producers, and 25,000 doses of Kazakhstan’s QazVac vaccine.

By the end of April, vaccination is scheduled to become available to two million citizens.

To ensure the vaccination plan meets the schedule, the ministry has increased the number of vaccination points and has deployed trade malls and hotels for this purpose.

Vaccination is now carried out at 1,051 points across the regions.

According to Worldometers data brought up by Tsoy at the government meeting, Kazakhstan ranks 57 in terms of the number of coronavirus cases that reached 292,250 as of April 20. There have also been 51,890 coronavirus pneumonia cases.

Kazakhstan also ranked 107 in terms of morbidity rate per 1 million of the population. The figure is estimated at 181, while the total death toll reached 3,436 from coronavirus infection and 754 from coronavirus pneumonia.

According to the epidemiological situation assessment matrix the nation has been in the high-risk red zone for 22 days. Eight regions are in the red zone, including the cities of Nur-Sultan, Almaty and Shymkent.

Only Turkistan and Kostanai regions are in the green zone, while all others are in the moderate risk yellow zone.

The ministry also conducts daily monitoring of bed occupancy across the regions and as of April 20, occupancy of infectious disease beds stands at 41 percent and intensive care beds – 27 percent.

The highest rate is in the West Kazakhstan Region – 63 percent, in Almaty Region – 61 percent and in the city of Almaty – 56 percent.

The cases also soared among schoolchildren after they returned to classrooms for the fourth semester beginning April 1. 3,706 schoolchildren got infected since then, including 2,613 learning online.

Reaching remote rural areas has also been among the tasks set by the ministry, as they have fewer resources compared to big cities.

The ministry also continues to update its forecast on how the epidemiological situation may unfold moving forward taking into account the progress in vaccination.

In the optimistic scenario, if vaccination continues as scheduled, up to 3,000 cases are expected to be reported daily peaking at the end of April.

Under a realistic scenario and the vaccination coverage going as scheduled, the cases could reach up to 4,000 per day, with a peak in mid-May.

The global situation with coronavirus infection and vaccination

More than 910 million doses have been administered across 156 countries, as of April 20.

Over the weekend, Israel hit the news after its government relinquished the mask requirement, and only requiring it in indoor public places.

61.9 percent of the country’s population over the age of 16 received at least one dose, and 57.6 percent received the full two doses of the Pfizer/BioNTech in Israel.

In the United States, the Food and Drug Administration and the Centers for Disease Control and Prevention recently suspended the use of the Johnson & Johnson one-shot vaccine due to reports of emerging blood clots of the nearly seven million doses administered so far

“All reports occurred among women between the ages of 18 and 48, and symptoms occurred six to 13 days after vaccination. As of April 13, 2021, of the more than 180 million doses administered so far of the Pfizer-BioNTech or Moderna vaccines, no reports matching those associated with the J&J/Janssen vaccine have been received,” reads the CDC statement.

This accounts for more than half of the country’s adult population.

According to Our World Data compiled by the Oxford University, the United States stands behind Israel, the United Kingdom, and Chile in terms of the share of the population that received at least one dose.

In the meantime, France passed a 100,000 death toll from coronavirus, according to the data released by the French government.

“Since the start of the pandemic, 100,000 French women and men have succumbed to the virus. All our thoughts are now with their families, their loved ones, for the children who have lost a parent or a grandparent, the bereaved siblings, the broken friendships,” said President of France Emmanuel Macron on Twitter commemorating the grim milestone.

In an interview with CBS News, Macron said his government considers ways to resume international arrivals for other European countries and the United States starting in May.

So far, the country had more than 5.2 million confirmed cases, and over 12 million people received at least one dose. It plans to vaccinate 20 million by mid-May.