Vaccination is a civic duty of every citizen, says President Tokayev

Kazakh President Kassym-Jomart Tokayev emphasized the importance of vaccination in addressing the spread of coronavirus infection and urged citizens to get a jab during an April 1 meeting on the nation’s epidemiological situation and fight against the coronavirus infection, reports a Strategy2050.kz correspondent. 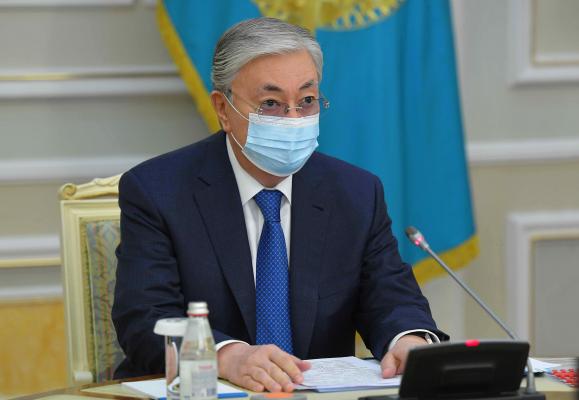 “I urge everyone to get the vaccine at the earliest opportunity. It is a matter of taking care of ourselves, our elders and our loved ones. After all, it is our civic duty," he said.

President Tokayev brought the example of countries, such as Israel and the United Arab Emirates, where vaccine roll out have demonstrated positive results.

He also criticized officials over delays in the nation’s vaccine.

“Since June last year, I have repeatedly instructed officials to enter into preliminary contracts for vaccine procurement. All this time, the government was assuring me that the arrangements for Sputnik V and domestic vaccine production would fully meet the country's vaccination needs,” said Tokayev.

As of April 5, 174,269 citizens in Kazakhstan, nearly 0.1 percent of the population, have received the first dose of the vaccine since the mass vaccination kicked off on February 1.

“Now I have to negotiate with the heads of other states for additional supplies of vaccine. We have to agree to unfavorable commercial and financial terms to speed up deliveries," said Tokayev.

Tokayev said that the slow pace of vaccination is a matter of national importance and national security.

“In April, you must turn the tide. Otherwise, personnel decisions that will disappoint you will follow. This applies not only to the Minister of Health but also to the government as a whole," said Tokayev.

Tsoy said in April more than 2 million doses of the Russian vaccine are expected to be delivered to the country’s regions. Overall, the ministry plans to immunize nearly 6 million citizens until the end of June.

The Kazakh Research Institute for Biosafety Problems, located in the Zhambyl Region in southern Kazakhstan, has also been developing its own vaccine since last year. The inactivated vaccine will have a new name - QazVac replacing the previous QazCovid-in.

It is currently in phase 3 of clinical trials expected to be completed July 9 this year.

"After that, there will be a lot of work to process the data from 3,000 volunteers, which will take about 20 calendar days. After that our report will be submitted to the Ministry of Healthcare for consideration in accordance with certain rules and regulations," said the head of the Institute Kunsulu Zakarya.

The situation has been worsening since the beginning of March.

Since the coronavirus outbreak in March last year, there have been 255,028 coronavirus cases and 50,832 coronavirus pneumonia cases.

Over the past day, Kazakhstan reported 1,921 new coronavirus cases and 17 coronavirus pneumonia cases. The majority of them are in Almaty (595 new cases) and Nur-Sultan (427 new cases).

According to the matrix of the epidemiological, cities of Nur-Sultan and Almaty as well as Atyrau, Aktobe, Almaty and West Kazakhstan regions are currently in high-risk red zone. Shymkent and Akmola and Karaganda regions are in moderate risk yellow zone.

All other regions remain in the green zone.

The surge in cases is attributed to new strains, Brazil, British and South African, which have been detected in Kazakhstan.

The number of passengers arriving in Kazakhstan without PCR tests doubled since February, which, according to Tokayev, brought the new strains. Since October 6 last year, Kazakhstan mandated arriving passengers present a negative Covid result. Foreigners who fail to do so cannot board the plane, and Kazakh citizens are placed in quarantine upon arrival.

“Kazakhstan, like many other countries, is going through another outbreak of the coronavirus infection. (...) The situation is complicated by general fatigue and declining vigilance on the part of the population, including businesses," said Tokayev.

He instructed the government to increase the capacity of hospitals, as the nation might face a health system overload, the situation it faced in the summer of 2020.

154 laboratories across the country conduct coronavirus testing that reaches 112,000 daily.

Speaking at the meeting, Kazakh Healthcare Minister Alexey Tsoy outlined several scenarios for how the epidemiological situation may unfold.

"In general, the nation is witnessing a realistic forecast scenario with rising morbidity in March and April. For the last 10 days, the nation registered 15,156 new cases and compared to the beginning of March, the level of morbidity doubled, including the largest increase in the cities of Almaty, Nur-Sultan as well as Almaty, Aktobe, Atyrau, Karaganda and West Kazakhstan regions," said Tsoy.

Given the new strains reported in Kazakhstan, the pessimistic scenario will have nearly 370,000 cases registered in April and June and 190,000 in need of hospital admission.

The realistic scenario envisions nearly 250,000 cases in April and June and 127,000 people that will need hospitalization, while the optimistic scenario may have around 140,000 cases and 71,000 citizens requiring hospital admission.

Overall, the global situation in terms of COVID mortality and incidence rates remains severe, he added.

According to Tokayev, the lessons that the nation learnt over the year of the pandemic should help overcome the situation with minimal restrictions and economic losses. In Kazakhstan’s largest city Almaty, some 50,000 enterprises employing more than 250,000 people have had to suspend their work.

Last year, businesses received tax exemptions, preferential lending and loan deferrals as support to address the consequences of the coronavirus restrictions. Nearly 4.5 million citizens, whose jobs were suspended due to the coronavirus outbreak, received financial assistance during a strict lockdown period.

Tokayev suggested several ways to extend the support to businesses in 2021.

“I ask the government to work on the following. First, to introduce a deferral of payment of certain taxes and payments for small and medium-sized businesses in the affected industries. Second, suspend the enforcement of tax and customs debts. These measures should be temporary until the start of the real mass vaccination and the lifting of most restrictions,” said Tokayev.