The Ministry of Trade and Integration on 9 September 2019 has held a meeting of the panel on the core provisions of the state-of-the-nation address of the Kazakh President chaired by the Ministry’s head Bakhyt Sultanov. 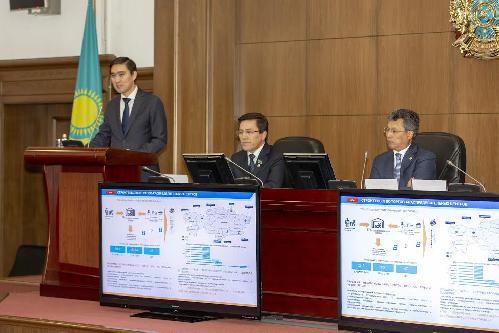 The panel meeting has gathered the representatives of the Presidential Administration, Chairman of the Committee on Economic Reform and Regional Development of the Mazhilis of Parliament Nurtai Sabilyanov, Board Chairman of Atameken National Chamber of Entrepreneurs Ablay Myrzakhmetov, the heads of business units, subsidiary organizations of the Ministry, members of the Ministry’s Public Council.

“The Head of State has set ambitious tasks and objectives before the Ministry: to set up a competitive trade policy, protect the national interests in integration processes, effectively promote Kazakh exports.

It is important in the period of the ongoing trade conflicts between the major actors of the global economy,” Mr.Sultanov said, opening the panel.

According to him, the Ministry works on the pressing issues and strategic areas as well as addressing the barriers to Kazakh goods on the markets of the Eurasian Union partner-countries.

“We are about to actively engage into all negotiations regarding the WTO, including those beneficial for Kazakhstan in the long run,” Mr.Sultanov said.

As part of the promotion of Kazakh exports, Central Asia, Russia and China have been chosen as the priority directions.

Reorganized as QazTrade, the Trade Policy Center has become a “single window” for exporters. It will act as an agent between the exporter and government agencies, and allow the Ministry to carry out a unified export policy together with sectorial government agencies, Atameken Chamber of Entrepreneurs and Baiterek holding.

“It is necessary not only to build up the volume but also to change the export structure: from primary goods to processed products,” the minister said.

Mr. Sultanov called on the Ministry to come up with additional comprehensive measures to support high-performance medium companies exporting their products in line with the tasks put forward in the state-of-the-nation address by the Head of State.

Ablay Myrzakhmetov reiterated that the businesses do not have a clear understanding of the requirements to enter foreign markets. That includes multiples financial, analytical, service aspects.

At the same time, we are observing the economic regionalism era amplifies the trade conflicts among the major actors of the global economy undermining a meaningful and competitive trade policy.

In that context, he outlined the timeliness and relevance of creating the new Ministry of Trade and Integration.

“Now business has one more reliable warrantor that protects their interests on world markets and national interests in economic integration processes,” he said.

The head of Atameken National Chamber of Entrepreneurs thanked the Trade Ministry for the creation of a unique opportunity for the domestic business – to take part in international trade using channels of e-commerce in all territories.

The exceeding the ceiling prices is a punishable offence for business subjects and may incur a fine of 100 MCI.

Domestic producers have the opportunity to place their products in all trading facilities as domestic trade actors are obliged to provide at least 30% of shelf space or sales area for products signed Made in Kazakhstan.

At the moment the Ministry is working on a bill on consumer rights’ protection, prescribing the competence of Governor’s Offices and Consumer Rights’ Protection Departments as well as the liability of domestic trade actors for violating consumer rights.

Denis Stepantsev said that the Ministry has a clear vision how to promote Kazakh goods on international markets and increase competitiveness.

He also promised that the Public Council will raise its performance by ensuring transparency and openness.

Finishing the meeting, Bakhyt Sultanov paid attention to the need for timely and quality implementation of all the tasks given by the Head of State as well as instructed to prepare proposals for inclusion in draft the national action plan for implementing the state-of-the-nation address of the Head of State.

During the panel, the Ministry of Trade and Integration signed a memorandum of mutual understanding and cooperation.

“We are certain this document will be the basis for long cooperation and mutual fruitful work on developing trade in the best interests of the domestic business,” the head of Atameken said.

The parties agreed to share information on trade activity development, including statistic data, the facts of the violations by the WTO and EAEU members of the commitments towards Kazakhstan, the data on the obstacles and restrictions that hindered the activities of domestic entrepreneurs on foreign markets.

They also exchanged the experiences in the sphere of regulating and developing trade, matching proposals on the use of State regulation measures falling within the competence of Atameken Chamber of Entrepreneurs, relating to the commitments of Kazakhstan as a member of the WTO and EAEU, and the appropriate draft legal acts.

The memorandum also provides for a prompt exchange of information on the factors explaining the variation of prices for socially important foodstuff.