Kazakhstan is a transcontinental state at the heart of Eurasia, with its most part in Asia, and smaller part in Europe. The largest landlocked country in the world shares borders with five states: Russia in the north and the west, with China in the east, with Kyrgyzstan, Uzbekistan and Turkmenistan - in the south, let’s have a brief peek in some of the attractive tourist sites of Kazakhstan brought by Strategy2050.kz. 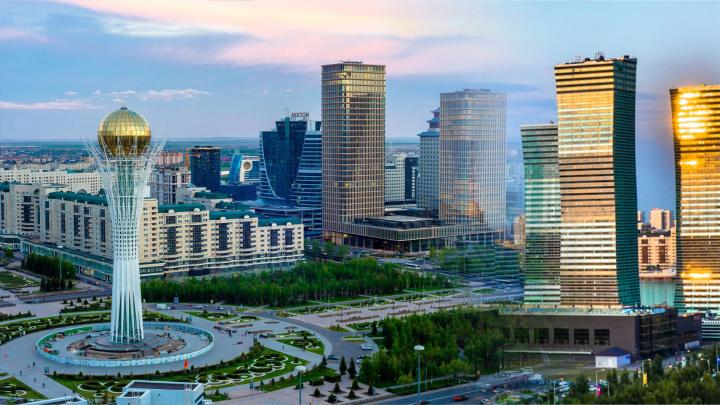 Must-visit sites include the Kazakh capital city of Nur-Sultan, which was moved from Almaty on 10 December 1997. In March 2019 the capital city that carried the name Astana from 1998 was renamed to Nur-Sultan after first Kazakh President, Elbasy (National Leader) Nursultan Nazarbayev. Despite being a young capital city, it is dotted with touristic sites.

Bayterek Tower is a monument and observation tower in Nur-Sultan, which is popular with foreign visitors and native Kazakhs. The tower is located within on the Nurzhol Boulevard, and is considered a symbol of post-independence Kazakhstan. 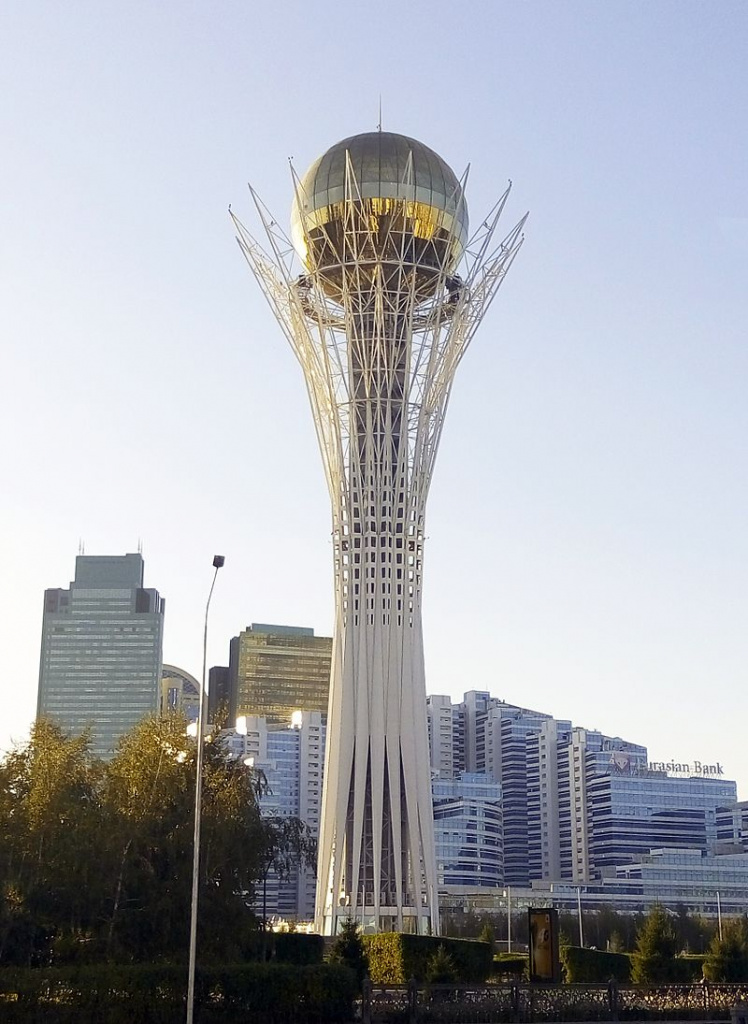 Ak-Orda is the Presidential Palace, one of the most interesting buildings in the modern history of the capital. Built in 2003 as the presidential residence, now it is an open public facility, providing tours for everyone. The building has four floors, each has its own purpose. The height of the first is 10 meters. 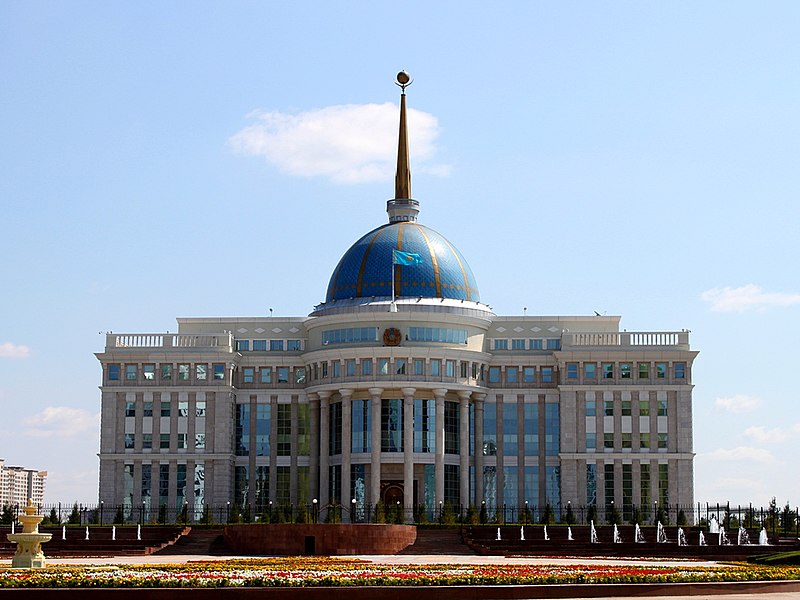 The Hazrat Sultan Mosque is a mosque in Nur-Sultan (former Astana), Kazakhstan. It is the largest mosque in Central Asia. 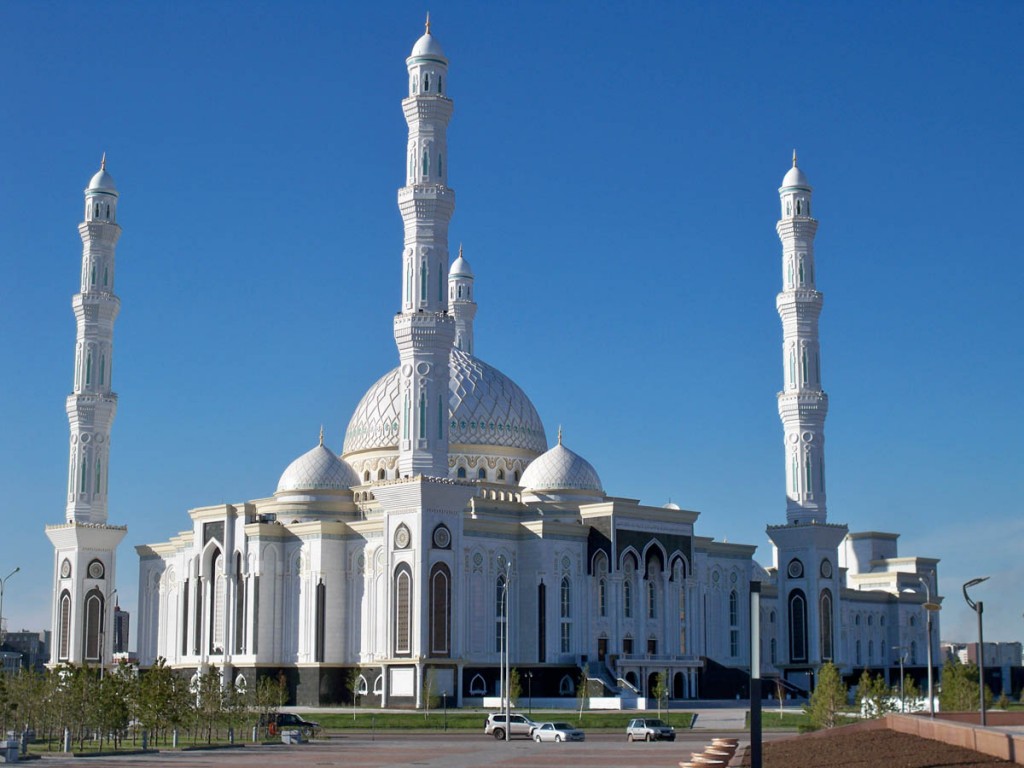 Almaty is a cultural centre of the country, the former capital of Kazakhstan with a lot of picturesque landscapes. The southern city is the largest city in Kazakhstan. 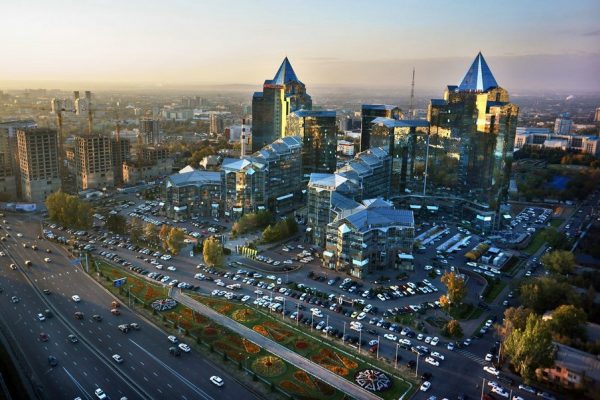 It is famous among lovers of winter sports, with the largest ski resort in Central Asia Shymbulak, as well as Medeu, a high-altitude sports complex near Almaty, located at an altitude of 1691 meters above sea level.

The Ascension Cathedral, also known as Zenkov Cathedral, is a Russian Orthodox cathedral located in Panfilov Park in Almaty, Kazakhstan. Completed in 1907, the cathedral is made out of wood but without nails. Its height is 56 meters tall, and is claimed to be the second tallest wooden building in the world. 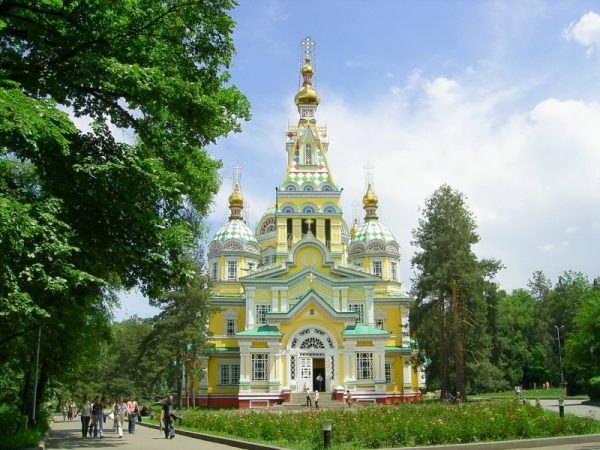 Economic and scientific activities of the country are concentrated in Almaty.

The city was founded in 1854 in the foothills of the Trans-Ili Alatau, in a picturesque place of the northern mountain range of the Tien Shan. 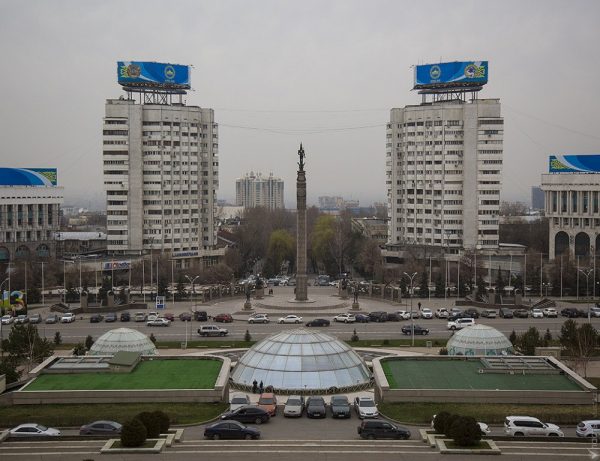 
Baikonur Cosmodrome is located in the desert steppes near the Syr Darya River. This is a unique place on the territory of Kazakhstan, whose whole life and history is connected with space. The city is leased by Russia until 2050. 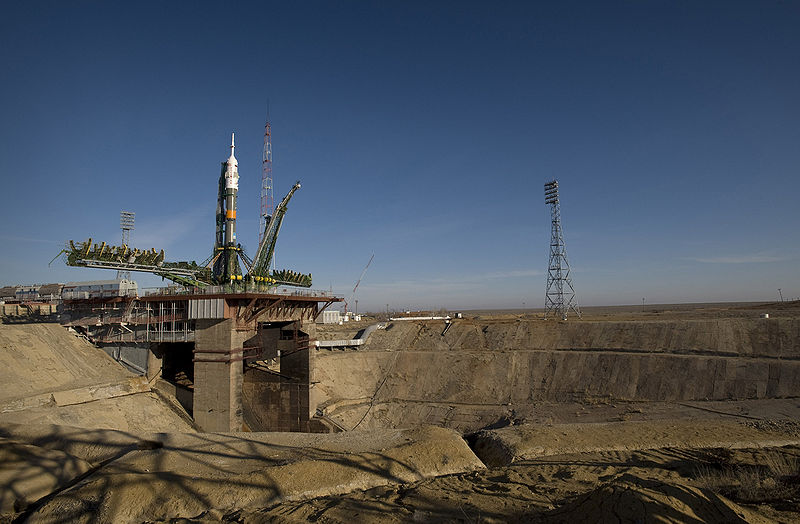 There are two museums in the city: one dedicated to the city, the other to the Cosmodrome. The most striking monument is the full-scale model of the Soyuz rocket. Recently, Baikonur is open for tourists, but only with the permission of Roscosmos. If you are lucky, you can see the launch of the rocket, the schedule is in the public domain.

One of the buildings of antiquity, preserved on the territory of Kazakhstan to the present day, is the Mausoleum of Khoja Ahmed Yasawi. The complex was erected on the orders of Tamerlane after the death of Khoja Ahmed Yasawi - a famous Sufi poet and preacher. Construction began in 1385 on the site of an old modest tombstone in the city of Yasi (now Turkestan) - the nodal point of the Great Silk Road. 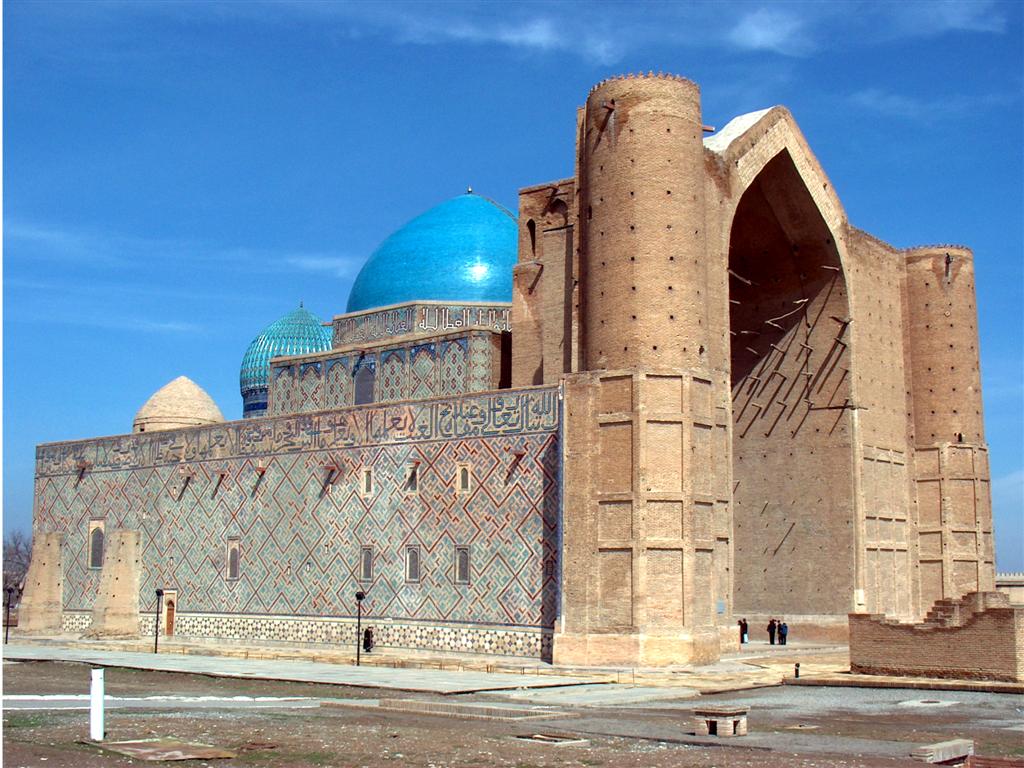 Burabay is one prominent lake of a group of lakes that share the same name in northern Kazakhstan, located in the Burabay District of Akmola region, in the eastern foothills of Kokshe Mountain.

Burabay National Park - a famous resort. It is located on the Kokchetav Upland in Akmola region on the shores of Lake Burabay. The park has 14 lakes, as well as Mount Sinyuha - the visiting card of the resort. 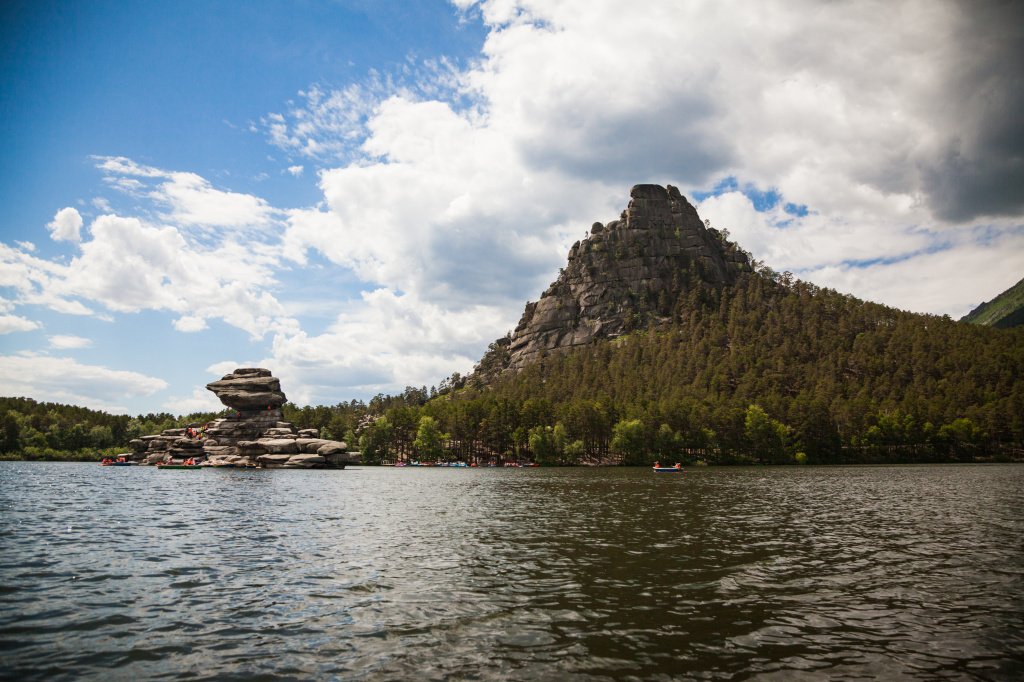 Korgalzhyn Nature Reserve is located 130 km south of Nur-Sultan. This unique natural monument is a UNESCO World Heritage Site. The reserve territory has been a habitat for pelicans, flamingos and other birds for many years.

Flamingos are one of the main inhabitants of the Korgalzhyn Reserve.

Naurzum Reserve is located in the steppe zone of Northern Kazakhstan. There are pine and mixed forests, plants listed in the Red Book, there are about 40 species of animals, including foxes, bears, moose, wolves, etc. Since 2008, the reserve has been included in the UNESCO list. 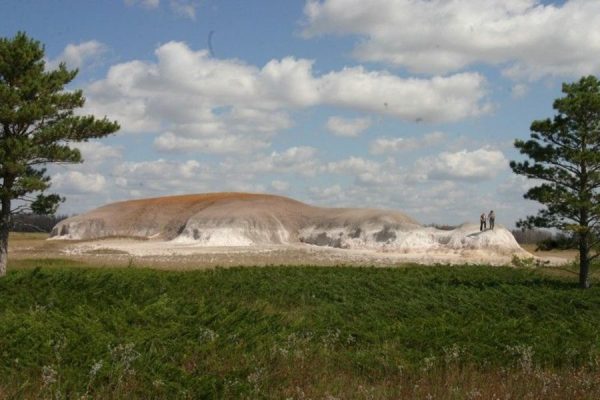 Charyn Canyon is a canyon on the Sharyn River in Kazakhstan. The canyon of roughly 90 kilometres in length and is part of the Charyn National Park (established on 23 February 2004), and sits within the territory of the Uygur District, Raiymbek District and Enbekshikazakh District (of the Almaty Province). Over time, the canyon has gained colorful formations of varying shapes and sizes. 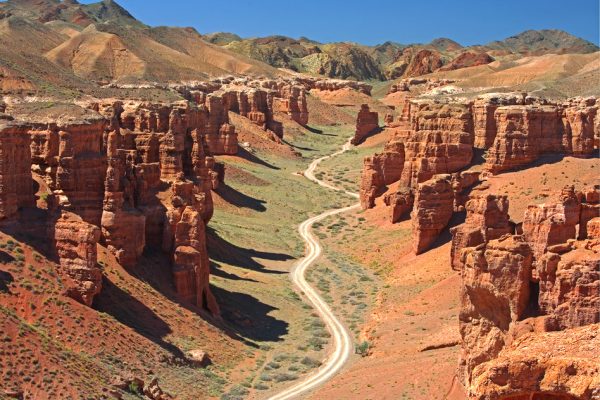 Kazakhstan is the ninth largest state in the world, with an area of 2 724 902 square kilometers.

Kazakhstan is a parliamentary republic led by the President. It gained independence from the former USSR on 16 December 1991.

There are three large cities, with each having a population of over 1 million people, among them Nur-Sultan (former Astana), Almaty (usually called the southern capital), and the burgeoning city of Shymkent.