Tokayev focuses on nuclear energy, situation in Afghanistan, rising inflation in his address to the nation

President Kassym-Jomart Tokayev delivered his address to the nation on September 1 during the first joint session of the Kazakh Parliament, reports Strategy2050.kz. 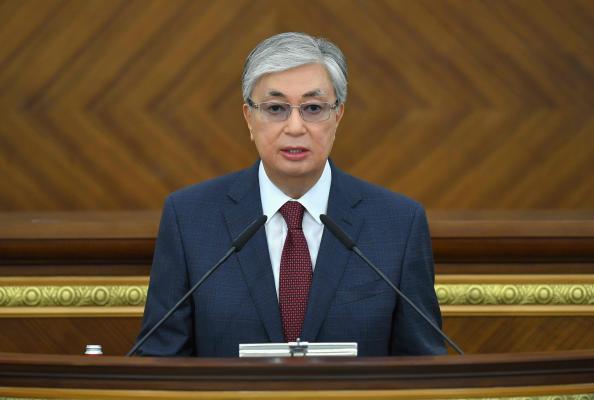 In his address to the nation, Tokayev spoke about several important issues, including accelerating the development of nuclear energy in the country, boosting the country’s military capacity amid the escalating situation in Afghanistan, among other topics.

Kazakhstan does not border Afghanistan, but the escalating situation in Afghanistan poses certain risks.

“The increased global tensions make us review our defense-industrial complex and military doctrine. Strengthening our defense capabilities and increasing our responsiveness to threats must also become priorities of national importance. We must prepare for external shocks and the worst scenario,” said Tokayev.

He tasked the government to work on modeling external risks, conducting stress tests, and formulating different scenarios that will help “adjusting actions of the state apparatus.”

The state should not be helping banks, according to him. He said, “the work to reduce the level of stressed assets is very important.”

Frozen assets should also be returned to economic turnover, but this step requires a legislative framework. He tasked the government to submit the draft law to the Parliament by the end of this year.

To fight the consequences of the pandemic, Kazakhstan committed a total of 6.3 million tenge, but, according to Tokayev, this resulted in an increased money supply.

“There are areas where funds do not flow. Second-tier banks do not invest in small projects, especially in rural areas. Therefore, the potential micro-financial organizations will have to be tapped. They work on the ground; they know their customers, their business, and opportunities. The National Bank and the Agency of on Regulation and Development of Financial Market should prepare a package of decisions on this issue,” said Tokayev.

The economic situation remains difficult, said Tokayev, announcing that he decided to extend the Economy of Simple Things and Business Roadmap programs through 2022.

The two programs are aimed at supporting businesses, including small and medium-sized ones. The Economy of Simple Things program was launched in 2018 with a goal to increase the production of domestic goods by the domestic market and boost the competitiveness of the manufacturing industry.

The Business Road Map program includes a set of state support measures, including subsidies on the rate of interest on loans, financial leasing, and collateral as well as training of entrepreneurs.

“The transfer of modern digital technology and the introduction of elements of Industry 4.0 are extremely important for Kazakhstan. We must work with our strategic partners abroad. It is important to nurture the domestic IT sector,” said Tokayev.

Over the past years, Kazakhstan made significant strides in developing its innovation eco-system, establishing Astana Hub that works to support startup culture and IT companies.

But more should be done to bring the country close to its national targets reaching at least $500 million in exports of digital services and products by 2025.

The country needs young educated specialists to achieve that goal.

“As part of the national project on digitization, it is necessary to train at least 100,000 high-class IT-specialists,” he added.

The country’s agricultural sector could also benefit from digital technologies, said the President. Space imaging and remote sensing are among them.

“It is important to use pastures efficiently,” said Tokayev.

Kazakhstan is expected to face an energy shortage by 2030, said President Tokayev and development of atomic energy is one of the ways to ensure the country has sufficient energy supply by then.

“The population and economy of our vast country are growing. Quality growth requires energy. With the gradual decline of the coal era, in addition to renewable energy, we will have to think about sources of reliable baseline energy generation,” said Tokayev. “Global experience suggests the most optimal way out - peaceful atom. The question is not simple. Therefore, its solution must be approached as rationally as possible, without speculation and emotion.”

He gave the government and the Samruk Kazyna National Welfare Fund one year to explore the possibility of developing safe and environmentally friendly nuclear energy in Kazakhstan, including engineering development, and nurturing a new generation of qualified nuclear engineers in Kazakhstan.

This comes as Kazakhstan tries to introduce green technologies and solutions into its economy. In December 2020, President Tokayev announced Kazakhstan’s commitment to achieving carbon neutrality by 2060.

“The world is moving towards the greening of industry and the economy. These are not just words, but concrete solutions in the form of taxes, duties, and technical regulation measures. We cannot stand on the sidelines - all this directly affects us through exports, investment, and technology transfer. This is, without any exaggeration, an issue of sustainable development in Kazakhstan,” said Tokayev.