In March, the Kazakh government adopted a National Development Plan that envisaged the nation’s midterm priorities and development goals. Chair of the Agency for Reforms and Strategic Planning Kairat Kelimbetov spoke about the nation’s new document at a press briefing on March 17, reports a Strategy2050.kz correspondent. 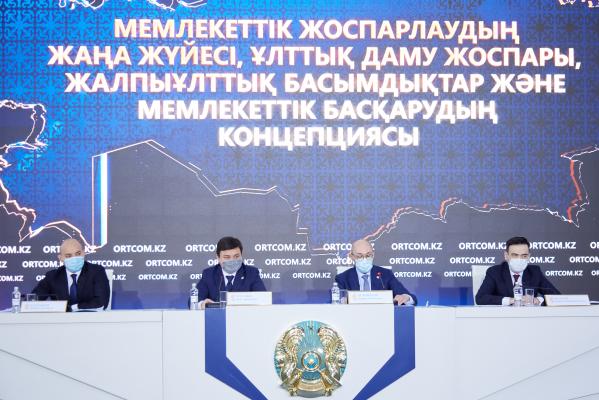 The National Development Plan 2020 supplements the country’s major Strategy 2050 document. It was developed by the Agency for Reforms and Strategic Planning and the Ministry of National Economy at the instruction of Kazakh President Kassym-Jomart Tokayev.

Tokayev has repeatedly spoken about the need to reform a state planning system, revise then country’s economic course amid new realities brought by the coronavirus pandemic and make the state apparatus more efficient and transparent, including in his address to the nation delivered in September last year.

The new document is based on ten national priorities. These include fair social policy, an accessible and effective healthcare system, quality education, a just and effective state to protect the interests of citizens, a new model of government, cultivating the values of patriotism, strengthening national security, building a diversified innovation-based economy, development of economic and trade diplomacy, and balanced territorial development.

“The national priorities are a special set of directions of our economy, social sector so that it would be crystal clear what goals we set in the near five years, how we plan to achieve them and who will be responsible for them,” said Kelimbetov.

National priorities are categorised across three key areas – the welfare of the citizens, strong economy and quality of institutions.

Kelimbetov also spoke about each priority in detail.

“We all have seen how important the social sector is, particularly amid the pandemic, every country revised the model of healthcare, quality of financing of different healthcare programs, therefore a priority of accessible and quality healthcare is one of those that the state will deal with,” said Kelimbetov.

In the education system, the nation plans to build 800 schools until 2025, address a three-shift system in schools by 2025 and a two-shift system by 2030, ensure access to quality internet in all regions and rural areas.

“We all witnessed strong social support programs during the pandemic. I think none of the post-Soviet countries provided such serious support, when financial assistance in the form of 42,500 tenge payments was provided to nearly 4.5 million people. Overall, fair social policy is an important priority in the state,” said Kelimbetov.

Until the end of 2021, the government will prepare the new Social Code that will cover the entire social sector.

The new system will strive to become people-oriented.

“Reviewing the main systems of the state planning, such as planning, budget, state service, public service and digitisation, we, first of all, encouraged the state bodies to suggest such approach that would increase the responsibility of state bodies in fulfilling tasks and fostering the effectiveness in the implementation of instructions amid the new challenges related to new economic global trends,” said Kelimbetov.

The analysis revealed the need for major transformation, which should be conducted steadily.

The transition to the new system is expected to be completed by the end of 2021.

The serious change in the system, according to Kelimbetov, is that the implementation of projects will incorporate project management mechanism.

The number of state documents was cut in an effort to make the state planning system more concise.

The new component will be national projects, which will replace state programs in their greater flexibility and efficiency. The list of national projects is pending the approval of President Tokayev.

Each national project will be concise, attainable, significant and align responsibilities to opportunities.

“Each nation project will target the entire country and should bring a positive impact to the whole country. It is also important that it is people-oriented, what people will get from it, how will it affect their social welfare, creation of jobs, diversification of economy and incomes of the population. Each program will be seen through the lens of these simple questions,” said Kelimbetov.

The new changes in the state system are meant to adopt the country’s response to the global economic trends.

“As a result of the pandemic, global GDP fell by a record 3.5. At the same time global debt reached an all-time high. The global oil market and other commodity markets have significantly changed. The pandemic is shaping a new world trade order, reinforcing trends towards self-sufficiency and protectionism,” said Irgaliyev.

The pandemic also revealed the greater need for digitisation, as virtual technologies become part of people’s lives, resulted in increased inequality and rise in unemployment, forced countries to review their approaches to the healthcare system and food security, among other matters.

The minister said the National Plan will help Kazakhstan overcome these challenges to ensure sustainable and qualitative economic growth in the midterm as well as improved quality of life and well-being of the population.