Senate deputies appointed Anastassiya Shchegortsova as a member of the Central Election Commission, the press service of the Senate reports. 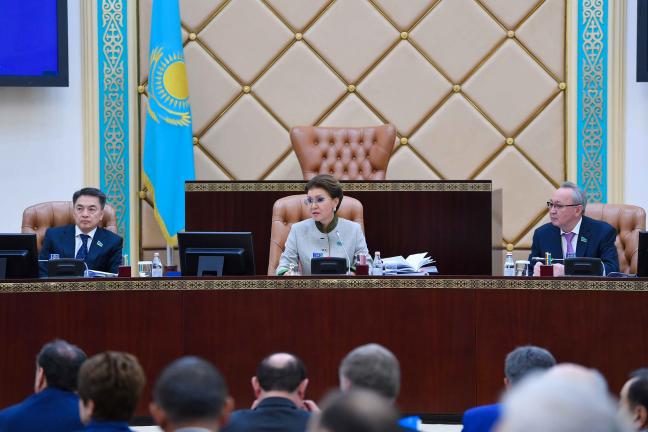 The submission of the Chairman of the Senate of the Parliament on the appointment of a member of the CEC was submitted to the Senate in accordance with subparagraph 7) of paragraph 3 of Article 58 of the Constitution of Kazakhstan. Senators unanimously supported this submission.

The Extradition Treaty between Kazakhstan and Ukraine has been ratified.

Deputy Prosecutor General Marat Akhmetzhanov informed that the Agreement, concluded on October 29, 2018 in the city of Nur-Sultan, regulates the extradition of wanted persons between the two countries to bring them to criminal liability or bring the court verdict to execution. The document provides grounds for extradition and refusal.

“Ratification of the Treaty will increase the effectiveness of cooperation between the two countries in the fight against crime. The main objective of the Agreement is to cooperate in the extradition of wanted persons in their territories for criminal prosecution or enforcement of a court sentence for crimes involving extradition”, Senator Andrei Lukin said in his report.

Each party has the right to refuse to extradite its own citizens on the basis of its national legislation.

The competent authority under this Agreement is the General Prosecutor's Office of Kazakhstan.

The Protocol on Amending the Agreement on Cooperation and Mutual Assistance in Customs Affairs of April 15, 1994 was ratified.

The bill was introduced by Acting Minister of Finance of Kazakhstan Berik Sholpankulov.

More than 20 years have passed since the signing of the Agreement, so there was a need to improve the rules of this Agreement by making appropriate amendments to the Protocol, setting it out in a new version.

The protocol, signed on July 1, 2018 at a meeting of the Council of Heads of Government of the Commonwealth of Independent States in Dushanbe, was developed jointly with the CIS member states following an inventory of the CIS regulatory framework in the customs sphere.

During the discussion, the Head of the Senate drew the attention of the responsible state authorities to the need to develop a joint plan for the modernization of border crossing points.