In 2019, the contribution of tourism to the country’s economy amounted to 5.6%, while by 2025 it is planned to increase this figure to 8%. For that purpose, it is necessary to increase investment flows and costs of domestic and foreign tourists on average by 7-8% per year annually, Strategy2050.kz reports with reference to FinReview.info. 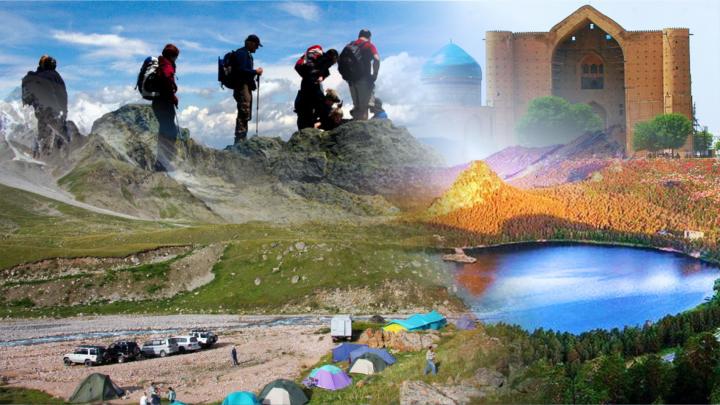 The modern tourism industry is one of the largest highly profitable and dynamically developing segments of international trade in services. Tourism forms about 10% of the global total product, 30% of the global export of services, 7% of global investments, 10% of jobs and 5% of all tax revenues. Taking into account the rapid and continuous growth of tourism, which lasts for the last ten years, as well as its significant impact on the economy and welfare of society, developed and developing countries define the tourism industry as one of the economic priorities.

In Kazakhstan, investment in tourism reached a record in the country’s history – 153.7 billion tenge

In Kazakhstan, the tourism industry is developing at a modest pace with small socio-economic effect on a national scale. In 2019, the total contribution of tourism in the total GDP amounted to 5.6% (under WTTC-methodology).

At the same time, by 2025 it is planned to increase the contribution of tourism to the country’s economy to 8%. That is, investment in the tourism industry and the costs of domestic and foreign tourists should grow by an average of 7-8% per year. Statistically, with the current pace of the industry’s dynamics, the indicator will be reached ahead of schedule. 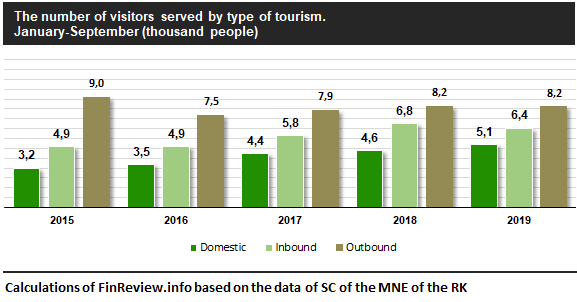 In the first nine months of 2019, outbound tourism in Kazakhstan amounted to 8.2 million people. Compared to the same period in 2018, the indicator slightly decreased by 0.1%. Domestic tourism, inversely, immediately increased by 9.8% to 5.1 million people. Which means that every third Kazakhstani tourist spends holidays inside the country.

In turn, the tourist flow from abroad to Kazakhstan, after the International EXPO-2017 Exhibition, crossed the limit of 6 million tourists a year. So, for the nine months of 2019, 6.4 million foreign tourists visited Kazakhstan. Compared with the same period in 2018, the indicator dropped by 5.4%, nonetheless, it remained 650 thousand tourists higher than the average annual value over the past five years.

In Kazakhstan, there are 3.6 thousand accommodation sites for tourists, including hotels (2.1 thousand units), small houses and apartments (1.1 thousand), children’s camps (120), specialized holiday homes (84), tourist centers (53) and other types of accommodation. Half of all locations are concentrated in East Kazakhstan (567 units), Almaty (540), Akmola (407) regions and the city of Almaty (341).

According to the results of the nine months of 2019, 4.9 million tourists, including Kazakhstani, used the services of the accommodation places. At the same time, about 60% of tourists stayed in the city of Almaty (984.7 thousand people), Almaty region (733.7 thousand), the city of Nur-Sultan (654.1 thousand) and East Kazakhstan region (484.8 thousand). The amount of accommodation services rendered in aggregate reached 92.1 billion tenge. Compared to the same period in 2018, the indicator increased by 16.6%.

It is remarkable that the average annual occupancy of placements has practically not changed over the past five years and ranges from 22% to 25%. Moreover, the number of tourist placements is annually expanding with an intensity of 12.5%. That is, statistics show the intensive development of regional tourism within the country. However, the reason for maintaining the occupancy of the placements is different, namely, their uneven distribution in accordance with the tourist flow. So, in the resort areas of East Kazakhstan region, the leader in terms of the number of residence places, an average of 855 people were served by each accommodation facility in the nine months of 2019. Similarly, in Akmola region, 762 people were served per 1 accommodation facility. In turn, in the city of Nur-Sultan, where 208 placements are concentrated, an average of 3.1 thousand people are served by each facility. And in the city of Almaty – 2.9 thousand people, in Mangystau region – 2 thousand people, in Atyrau region – 1.9 thousand people. Consequently, it implies an increase in depreciation of accommodation facilities, a decrease in competition in the regions and a deterioration in the quality of service. 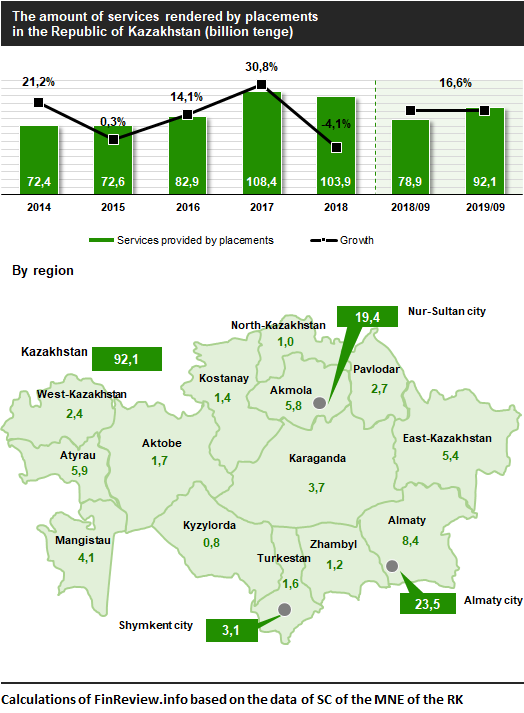 In Kazakhstan, there are more than 100 tourist sites that can become the so-called “tourist magnets” and “points of tourist growth.” The development of their tourism infrastructure requires substantial investment. However, due to insufficient resources, only 10 republican destinations and 50 regional destinations were selected to include in the Tourism Map of Kazakhstan.

So, in the TOP-10 priority tourist areas of Kazakhstan, representing a high potential for tourism development, are:

2.    The mountain cluster of Almaty region with a potential of 2.5 million tourists per year (current flow – 500 thousand);

7.    The historical and cultural center of Turkestan with a potential of 1.5 million tourists per year (current flow – 500 thousand);

8.    Beach recreation in Mangystau with a potential of 750 thousand tourists a year;

9.    MICE tourism in the city of Nur-Sultan with a potential of 1 million tourists a year;

10. Baikonur tourist zone with a potential of 250 thousand to 500 thousand tourists a year.

That is, it is expected that the annual flow of tourists will increase by more than 6 million people and reach the figure of 15 million tourists. As a result, industry profitability will increase. For example, the amount of tourist accommodation services rendered will increase by approximately 200 billion tenge.

Tourist arrivals from the UAE, India and Malaysia increased by 50%, 49% and 44%, respectively

The availability of direct flights plays a significant role in increasing the arrival of foreign citizens in Kazakhstan. An example would be direct flights from countries such as the United Arab Emirates (Dubai – Almaty, Dubai – Aktau), India (Nur-Sultan – Delhi), Malaysia (Almaty – Kuala Lumpur), which allowed to increase the tourist flow by 50%, 49% and 44%, respectively.

Moreover, Russia remains the main foreign market for attracting tourists to Kazakhstan, with over 10 direct destinations available with its regions. The most popular of them are flights from Tyumen, Krasnodar, Tomsk, Sochi, Moscow, Novosibirsk, St. Petersburg and others.

Airlines regularly expand the direction of international flights. So, in 2018 new direct flights were established: Atyrau – Frankfurt, Nur-Sultan – Vilnius, Nur-Sultan – Dushanbe, Almaty – Riga, Nur-Sultan – Helsinki. As a result, in 2019, Tajikistan and Germany entered the TOP 10 countries by the influx of tourists to Kazakhstan.

Thus, the operation of the Dubai International Financial Centre (DIFC) has made it possible to increase the attractiveness of tourism in the country by creating attractive conditions for business and financial institutions. Providing them with the necessary legal, commercial and other infrastructure ensured the accelerated growth of the business sector in the country. As a result, Dubai has attracted the world’s largest companies to the country. As of January 2020, about 2.5 thousand companies were registered in the jurisdiction of the International Financial Centre of Dubai, whose contribution to the GDP of Dubai by 2024 will be about 15%.

In Kazakhstan, the Astana International Financial Centre operates, in whose jurisdiction over 390 companies from 26 countries are registered. At the end of 2019, the AIFC attracted about 130 million dollars of foreign direct investment. At the same time, the main cash flow went to the petrochemical industry, agricultural processing, financial services, tourism and education.

Given that the current state of the tourism sector is hampered by insufficient flows of investment funds, and the country’s territory has unique tourist destinations, 11 of which are included in the UNESCO World Heritage List, the AIFC potential will accelerate the development of the sphere and increase the country’s international status.

What benefit will Kazakhstan receive from tourism development?

The development of the tourism industry helps strengthen interstate relations and culture, increase the inflow of foreign currency, increase the balance of payments, stimulate the export of goods and services, increase employment, build and reconstruct infrastructure facilities, and accelerate the diversification of economic sectors. As a result, about 200 thousand new jobs will be created in Kazakhstan, among which 72 thousand permanent ones, and the net profit from tourism for all concerned parties – the state, business and workers will increase to 200 billion tenge per year (currently the yield is about 118 billion tenge). 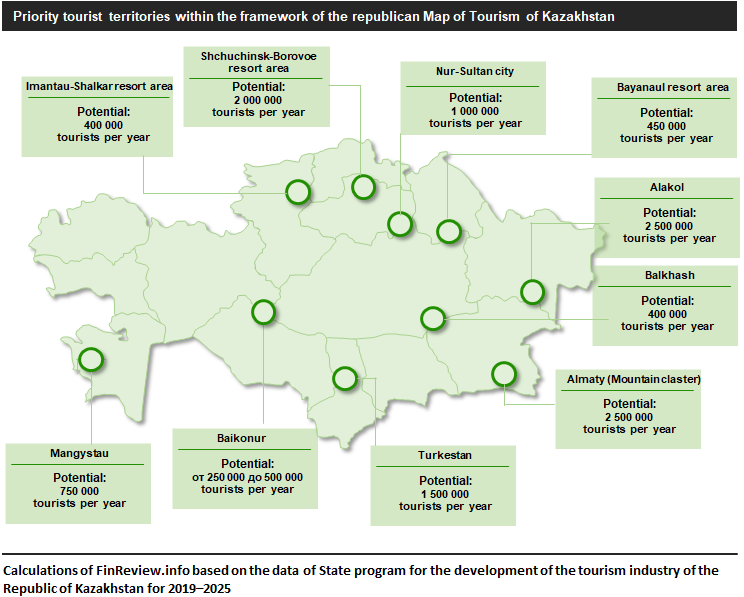