President's 2020 State-of-the-nation-Address: what you need to know (Part 2)

On September, 1 President Kassym-Jomart Tokayev delivered his annual State-of-the-nation-Address “Kazakhstan in a new reality: time for action”. In the Part 1 we did a review of the themes related to the public administration, country's economic growth. Education issues, healthcare system and other important social themes can be read in the second part of the review of the Strategy2050.kz Internet-portal. 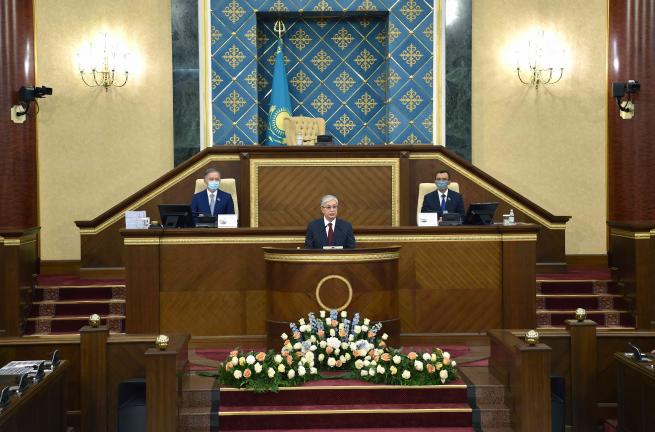 “The industrial potential of the south and southeast of the country should be more actively developed. It is here that half of the state's labour resources are concentrated and high-quality jobs are critically important for the development of these regions”, said the President.

According to him, in addition to traditional support for the agricultural sector, substantial attention should be paid to the thorough processing of agricultural products, the development of the food and textile industries, the production of building materials and other industrial sectors.

The Head of State noticed that it is necessary to pay attention to East Kazakhstan, Karagandy and Pavlodar regions, the regions that could become centres of high-tech, science-intensive industries and technical services. The western regions of Kazakhstan should become the centre of investments attraction in the construction of petrochemical complexes, the creation of new production cycles of high added value.

“It is especially important to give "a second lease of life" to our single-industry towns. Here, great responsibility is assigned to city-forming enterprises. This task will not be achieved without their active participation”, Tokayev added.

“Already in 2021, 700,000 Unified Accumulative Pension Fund contributors will be able to use part of their savings for the purchase of housing, medical treatment or for transferring it to the management of financial companies”, President Tokayev stated.

The “adequacy threshold” is the same for men and women:

It should be noted that the amount exceeding the “adequacy threshold” can be withdrawn only.

The Head of State insisted that effective social support will be provided to citizens with insufficient income to resolve housing issues independently.

Also Kassym-Jomart Tokayev instructed to resolve the housing problems of those on the waiting list more quickly and to accelerate the provision of communications for plots for social private houses, including through public-private partnerships.

“The UN forecasts for the growth of the population of Kazakhstan in comparison with our neighbours in Central Asia are disappointing. I instruct the Government to launch a special "Longing for a Baby” programme starting 2021. We need to increase the number of quotas for IVF programmes to 7,000, that is, seven-fold”, the President gave the instruction.

Additionally the Head of State said that the issues relative to the safety and protection of children's rights must be under special attention.

“We have significantly increased criminal liability for sexual abuses against minors. But the problem remains acute. Such criminals deserve more severe punishment, without the right to pardon and early release. They should be kept in maximum security facilities. Each such case should be under the special control of the Office of the Prosecutor. Inaction or negligence on the part of social or law enforcement agencies will be severely punished”, said the President.

Tokayev instructed the Government to start developing a Social Code for the country.

“Measures should be taken to digitalise welfare payments. To this end, there is a need to introduce a digital citizen’s "social wallet", as well as create an appropriate distribution system”, concluded the President.

“I have already made a decision to increase the salaries of teachers by 25% as from January 2021. This will be increased in the future. For these purposes, an additional 1.2 trillion tenge will be allocated over the next three years”, Tokayev said about teachers' salary increase.

As for the all-round development of children before they enter school the President set the task of ensuring that by 2025 there will be 100% coverage of pre-school education and teaching for children under six years of age.

In order to increase the level of citizens’ literacy and digital knowledge, the Head of State instructed to develop a Concept of Lifelong Education.

“This document should ensure the active introduction of alternative options for non-formal education, recognition of the results of independent learning and the certification of professional skills”, Kassym-Jomart Tokayev stated.

The subject "Fundamentals of Entrepreneurship" will be studied at all levels of education - from schools to universities.

The Head of State also paid his attention to sports and the creative potential of the younger generation.

“Priority should be given to mass sports, physical education and, of course, to children. In each region, sports facilities should be opened in large district centres. We also need to resume the activity of "children's circles", where representatives of the young generation can learn the basics of creativity and handicraft”, Tokayev said.

Speaking about the development of science in the country, President Tokayev assigned the Government to provide internships in leading research centres of the world for 500 scientists annually, as well as provide 1000 grants for young scientists for research under the Zhas Galym project.

“An important source of funding and support for science is through the largest enterprises, especially in the raw materials sector. The current norm on the deduction of 1% of capital investments for the development of science and technology is not transparent. Often these funds are simply redistributed within companies. I instruct the Government to ensure the centralisation of collection and distribution of these funds through the budget, based on national scientific priorities”, said the President.

“I instruct the allocation of 150 billion tenge for the payment of incentive bonuses to medical workers for the second half of the year under the soon-to-be revised budget”, the Head of State said.

According to him, wages for medics and health care workers will be twice the national average wage by 2023.

In the President's words, the domestic pharmaceutical industry should be got off the ground.

“All basic medicines and medical devices must be manufactured in Kazakhstan. This is a national security issue. From next year I expect concrete results in this area”, he said.

13 new infectious diseases hospitals will be built in various regions of the country by yearend. 20 modern multi-functional healthcare facilities will be commissioned by 2025.

“On the initiative of the Leader of the Nation, two multi-disciplinary medical centres will appear in Nur-Sultan and Almaty. They will become the flagships of our medicine, growth points for innovation and the development of applied medical science”, added Tokayev.

Also Kassym-Jomart Tokayev said that it’s necessary to reconsider approaches to the organisation of primary healthcare to make it more mobile and accessible to a wide range of the population, including those living in the countryside; to revive the transportation of medicine to remote regions.

Amidst the pandemic the Head of State paid attention to the issue of training of epidemiologists, infectious disease specialists, intensive care staff, pulmonologists, and cardiologists. He instructed the Government to draw up a long-term forecast of staffing medical institutions.

“Measures for the further development of national healthcare will make it possible to fully equip all medical organisations with the necessary equipment, to update the hospital beds fund by 50%, to replace outdated infrastructure, and to increase life expectancy to 75 years”, said the President.

President Kassym-Jomart Tokayev instructed Kazakh Parliament to consider and adopt a new Environmental Code by the end of the year.

According to him, over the next five years, more than two billion trees will be planted in the countryside and 15 million in cities and towns.

“Legislatively and normatively, it is essential to protect the national parks and other natural resources of Kazakhstan, as well as to toughen up the criminal and administrative prosecution of citizens who commit offences in this area”, told the President.

Development of a culture of ecological tourism within the country was also mentioned.

As for “green” economy the President instructed the Government, in cooperation with the scientific community and the private sector, to develop a package of proposals for “green growth”.

Animals' protection issue did its part. Here the Head of State gave the instruction to develop a draft law on the protection of animals.

“Children from socially vulnerable families should be provided with computers and high-quality Internet. By the end of this year, each village with a population of over 250 people will have access to the Internet”, the President assured.

According to the Head of State, it is necessary to fully digitalise the processes of assigning pensions and benefits.

“We must strive to abandon the use of paper in interagency cooperation and when communicating with citizens. I instruct to cancel the most demanded certificates and paper confirmations (30 out of 47) by the end of the year, to provide digital confirmation of information. There is already a good practice established for addresses, property and other similar certificates. Identity cards, diplomas, licenses must be accepted by government agencies in electronic form”, the President of Kazakhstan said.

Also Kassym-Jomart Tokayev noted that biometrics should be widely used at a public service level and in private business.

The development of the IT market, engineering and other high-tech services require consideration, according to the President.

In his words, Kazakhstan should attract the world's digital giants to the country.

“We need to bring the volume of investments up to 500 billion tenge within five years”, said Tokayev speaking about digital mining.