Nurlan Nigmatulin met with the WHO delegation

Chairman of the Mazhilis Nurlan Nigmatulin jas met with a delegation of the World Health Organization led by Director of the WHO Regional Office for Europe Hans Kluge, the lower chamber’s press service informs. 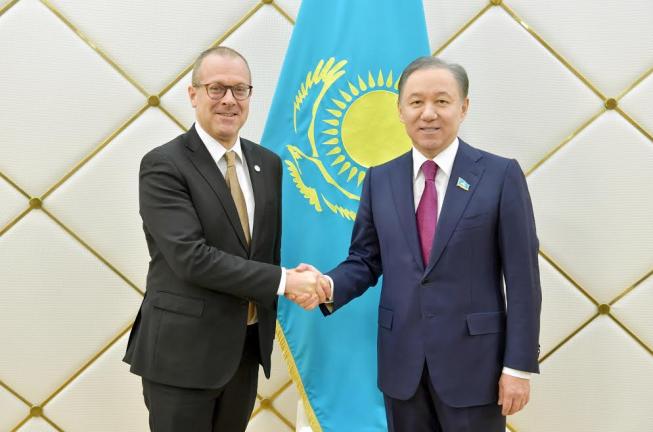 The Speaker of the Mazhilis has expressed confidence in expanding the fruitful cooperation of the country with the WHO.

Nurlan Nigmatulin emphasized that for the leadership of Kazakhstan, strengthening the health of the nation is one of the most important tasks of national policy. The package of measures implemented in the country includes the creation of high-tech medical centres, the introduction of a compulsory social insurance system, the improvement of domestic legislation, etc.

As for cooperation with the WHO, the Chairman of the Mazhilis noted effective interaction in the field of primary health care, the introduction of advanced technologies, and the development of skills for health care workers.

According to him, the Astana Declaration on Primary Health Care, adopted in 2018 in Kazakhstan, confirmed the relevance of the development of this area as the flagship of the entire healthcare system.

The meeting has also centered on the Code "On the health of the people and the health care system", which is now in the Mazhilis’s work.

Noting that the draft provokes hot talks in the society, Nurlan Nigmatulin pointed out that the deputies widely discuss its norms at various dialogue venues.

“Along deputies and representatives of state bodies, the Working Group on the draft Health Code includes representatives of NGOs, public organizations and associations of the health sector, scientists, doctors, and specialists in the field of medical education. The final result will undoubtedly be based on consensus, taking into account the opinions of all sectors of society. Deputies are interested in the fact that after the adoption the new Code, in fact, will ensure the availability of medical services and improve their quality,” the Mazhilis Speaker said.