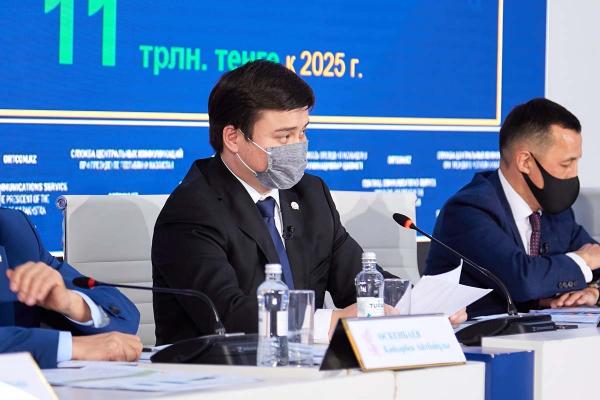 The project consists of 10 tasks, 30 indicators, and 69 measures.

“Measures will be taken to create conditions for starting their own business, including the Bastau Business project. We also plan foreign business internships to expand business ties. At the same time, we plan such projects as youth internship for graduates and social jobs for vulnerable groups to reach the unemployed, as well as the Silver Age project for employment of persons of pre-retirement age,” said Irgaliyev.

Within the Bastau Business program that trains emerging entrepreneurs how to do to business, the number of entrepreneurs starting their own business will increase 1.7 times. By 2025, the level of employment after short-term professional training will increase from 55 percent to 80 percent, and financial support measures will be provided for 52,000 projects of business entities.

To accelerate the growth of entrepreneurs, the government plans to reduce the administrative burden on entrepreneurs.

“Integration of information systems of government agencies with the Government for Business website will increase the share of public services rendered to small and medium-sized businesses to 40 percent in 2025. We plan to subsidize part of the interest rate and guarantee loans. Allocation of grants for new business ideas will make it possible to create 55,000 businesses in the countryside,” said the minister.

Implementation of all planned measures will allow significantly reduce the burden on business and give a strong impetus to the development of business activity in the new economic reality.

But active government support of business should continue, including financial support in the form of microcredits and grants.

Small and medium-sized businesses will also have access to financial stimulation measures.

The program of export acceleration, aimed at nurturing new exporters and increasing the competencies of existing exporters, will continue as part of the promotion of non-resource exports in the national project. It will provide access to foreign markets for 1,000 active exporters. Nearly 350 exporters are expected to get access to Alibaba, Amazon, and OZON electronic trading platforms.

"Promotion of exporters to foreign markets will be supported through the following measures - pre-export and export financing, insurance, working capital financing, as well as reimbursement of exporters' expenses. These are the measures that are in greatest demand today and they will give an incentive," said Irgaliyev.

Kazakhstan seeks to double its non-resource exports to $41 billion.

In the development of new niches as part of the national project, Kazakhstan will focus to boost its tourism potential though the creation of favorable conditions for tourism businesses.

"To introduce modern technologies in the development of tourism industry, we plan measures aimed at improvement of the management system of the industry and quality of tourism services. This will ensure the coverage of 95 percent of places of accommodation with E-qonaq information system,” said the minister.

While Kazakhstan prepares to implement the national project, its economic indicators show signs of improvement.

"In January to October, Kazakhstan's economy showed a growth of 3.5 percent. In the real sector, growth was 2.9 percent. Business activity in the service sector grew to 3.4 percent," said Irgaliyev.

The service sector, processing industry, and construction remain drivers of growth coupled with high growth of export and investment activity in non-extractive industries.

As for investments, their growth in fixed assets, excluding the mining industry, was 14 percent with construction, manufacturing, agriculture, trade, real estate showing the highest dynamics.

According to Irgaliyev, between January to September, the foreign trade turnover made $72.8 billion, including $43.3 billion of exports. At the same time, exports of processed goods increased by 25.5 percent to $14 billion, and imports - $29.5 billion.

Irgaliyev emphasized that the central and local executive bodies should focus on providing the planned volume of sales in the agricultural sector, the timely completion of the season in the construction industry, the effective implementation of measures to combat inflation, vaccination, and revaccination of the population.