The mass vaccination campaign began in Kazakhstan on February 1, and the nation has so far immunized 76,188 of its citizens, reports a Strategy2050.kz correspondent. 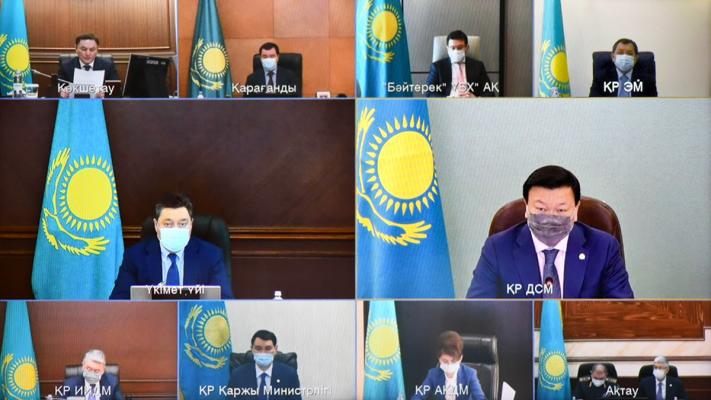 The effect of the vaccination, however, may be delayed, as time is needed to develop herd immunity.

Kazakhstan currently uses the Russian Sputnik V vaccine produced at the Karaganda-based pharmaceutical plant. In February, it delivered 93,000 doses of the vaccine to the country’s regions, 180,000 are expected in March and up to 600,000 each month from April to June.

“In April, the vaccination is expected to cover vulnerable groups of the population, people with chronic conditions and citizens over the age of 65. Given the increase of the vaccination numbers, there is a need to increase the number of vaccination points given the requirements for storage are ensured,” said Kazakhstan’s Minister of Healthcare Alexey Tsoy addressing the government meeting on March 16.

The minister spoke about the epidemiological situation in Kazakhstan.

“Overall, the number of cases is declining around the world. In four out of six regions, there is a slight decline. In the eastern Mediterranean region and Europe, there is an increase in the incidence rate. Due to this, in Italy, Slovakia, Bulgaria, Germany and other countries, measures were restricted,” said Tsoy.

Since the first cases were reported in Kazakhstan on March 13, 2020, there have been 226,767 cases and 2,873 people died from it.  In February, compared to January, there has been a decrease in the number of coronavirus cases by 30 percent, and by 1.2 times in March.

The coronavirus cases are on the rise across the country, particularly in the cities of Nur-Sultan and Almaty as well as the West Kazakhstan region.

Over the past days, the nation has been reporting more than 1,000 cases daily. Over the past day, it registered 1,082 cases. But the situation remains stable, according to Tsoy.

R0 value, which refers to the possible number of infections one person with Covid-19 could transmit, is estimated at 1.1 in Kazakhstan. Occupancy rate of infectious hospital beds stands at 24 percent, and in intensive care units at 16 percent.

Ensuring coverage with vaccination is the first priority in the fight against the pandemic, said Kazakh Prime Minister Askar Mamin.

"Vaccination will help develop collective immunity within the population and address the spread of infection. This is very important in combating the pandemic as well as restoring economic growth," said Mamin.

According to the ministry, no side effects were reported so far.

Different scenarios for the epidemiological situation

“The working group of the ministry has made a forecast of the epidemiological situation until the end of 2021, while maintaining the current restrictive measures, including mandatory mask regime, social distancing and the vaccination. In the optimistic scenario, up to 500 cases daily are expected in April. In the pessimistic scenario, the figure could reach up to 1,700 cases per day," said Tsoy.

Cases on the rise among schoolchildren

The local executive bodies must ensure compliance with sanitary regulations, said the minister.

Currently, Kazakhstan resumed air travel with 14 countries, while the number of flights increased to 95 per week.

“Most passengers arrive in the cities of Nur-Sultan and Almaty. Since October 6 (when travel requirements were introduced), more than 1 million people have crossed the border, 203,000 people were tested and 1,036 cases were detected,” said Tsoy.

No new coronavirus variants were reported in Kazakhstan.

To address the potential surge in coronavirus cases as the nation celebrates Nauryz holiday next week, the officials in Kazakhstan’s largest city Almaty and capital city Nur-Sultan announced additional restrictions.

Starting March 18, at least 80 percent of all employees should be working from home regardless of the type of organization.

The work of trade malls, closed-door markets, indoor sports facilities, and public transport will be suspended on Sundays.

The working hours of cafes and restaurants will be from 7 am until 10 pm.

“The mass celebration of the Nauryz holiday is banned. We should prevent the increase in the cases. To prevent a load on medical organizations and medical workers, it is necessary to follow strict sanitary measures, wear masks and practise social distancing,” said Nur-Sultan city chief sanitary doctor Sarkhat Beisenova.

In Almaty, lockdown may also be considered if the number of daily cases will reach 300, said city’s chief sanitary doctor Zhandarbek Bekshin. Over the past day, the city confirmed 307 cases.

“If there are even 300 admissions to the hospital every day, then, certainly, the city will go into lockdown. If we do not take preventive measures on time, then we will have to close entirely, the entire industries. But our task is to prevent this, when it is still not too late for that,” said Bekshin.