More than 13,000 medical workers received the first dose of the vaccine since the mass vaccination campaign began in Kazakhstan on February 1, said Kazakh Minister of Healthcare Alexey Tsoy at a press briefing in the Central Communications Services, reports a Strategy2050.kz correspondent. 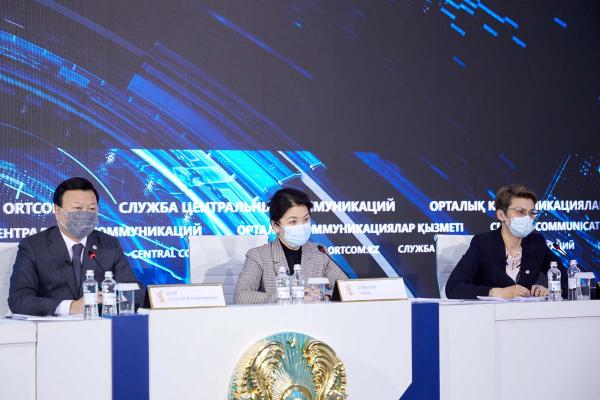 "As of February 10, 13,301 people had been vaccinated. The first to be vaccinated are medical workers of infectious diseases hospitals, ambulance services, and other specialties that are at high risk of coronavirus. Next, teachers and law enforcement officers will be included in the group as the volume of vaccines increases," Tsoy said.

The body builds protection on the 12-14th day after the first dose, but to ensure full protection, two doses are needed to be injected in a 21 days interval.

The immune response emerges within one and a half months after the two doses, he added.

Citizens over the age of 18 are eligible for vaccination, but Tsoy said the ministry will review the inclusion of citizens older than 65 years of age in the vaccination program taking into account current risks, such as chronic diseases, allergic reactions, or any other contraindication.

"This age group was not included in the group to be eligible for vaccination because there was a lack of scientific evidence in the age group over 65 and the need to vaccinate high-risk individuals first," said the minister.

Tsoy also spoke about the existing skepticism towards vaccination, as many people question the safety of vaccines that were developed quite fast.

"People also believe that it is better to get over a coronavirus infection, but I would like to remind you that it leads to 'post-covid' complications, which affect the immune system, exacerbate chronic diseases and impair the functions of vital organs like lungs, liver and heart. Covid does not go away, and the recovery period is very long and not easy," he warned.

Sputnik vaccine is based on a human adenoviral vector-based platform. Each shot of the Sputnik vaccine uses different vectors to ensure a stronger effect and longer duration of immunity, according to the developers.

Russia registered the vaccine in August before it passed the phase 3 trial, which raised concerns. But the recent report published by Lancet, one of the world’s leading medical journals, shows the effectiveness of the Russian vaccine is 91.6 percent. The result was taken from 20,000 trial participants.

“The interim report of the phase 3 data now presented, includes results for more than 20 000 participants, 75 percent of whom were assigned to receive the vaccine, and the follow-up for adverse events and infection. With a planned study power of 85 percent, those recruited were aged 18 years and older, were about 60 percent male, and were almost all white,” said the article published in Lancet.

Production of Russian vaccine in Kazakhstan

In February, the production of the Russian vaccine began at the Karaganda pharmaceutical plant.

"Production of the first supply of 90,000 doses has already started and will be available for shipment to the storages of the single distributor and further to the regions by the end of February. The production volume will be then increased to 2 million doses by July. In addition, the country is expected to use domestically produced vaccine - QazCovid-in - of nearly 2 million doses in the first phase," said Tsoy.

The production is based on the agreement signed between the Kazakh Ministry of Healthcare and the Russian Direct Investment Fund. The technical audit conducted by the RDIF specialists confirmed the plant meets all requirements for the production of the vaccine.

“We produce the finished vaccine from raw materials (pharmaceutical substance) supplied by RDIF. The pharmaceutical plant performs double quality control in its own laboratory and in the laboratory of the vaccine's developer, the Gamaleya Research Institute in Moscow. After passing stringent controls, the vaccine is supplied to the single distributor of the Kazakh Ministry of Health. Our tasks also include further follow-up of the vaccine - pharmacovigilance: monitoring of side effects, collection and analysis of claims and patient complaints,” said the Karaganda plant representatives.

Production of the vaccine at the plant is a strategically important social project and its main goal is not generating profit, but contributing to the improvement of the epidemiological situation in the country. The agreement envisions the production will last through June 2021.

According to the ministry’s regularly updated matrix of epidemiological situation, Kazakhstan has returned to a green zone. As of February 12, Kazakhstan reported 200,044 COVID-19 cases and 2,630 deaths. The country also had 48,522 coronavirus pneumonia cases and 592 people died from it.

Ashyq mobile application in the fight against COVID-19

Kazakhstan also introduced a mobile application name Ashyq (open in Kazakh) to assist public healthcare workers in the fight against COVID-19. By scanning a QR code, the app, which integrates the data from the Ministry of Healthcare, reveals the status of a user, from red to green, where red refers to the restriction of movement to green which means no restrictions.

The app was developed particularly for businesses, whose work was restricted due to the restrictions that vary across the regions based on an epidemiological situation. These include fitness centers, spas, swimming pools, banyas, and cinemas. Currently, 40 businesses voluntarily connected to the app.

“The mobile application was developed by a domestic IT company. The application was launched in the cities of Almaty, Nur-Sultan, and Karaganda in the pilot mode by businesses whose work was allowed, but was limited depending on the zone of epidemiological risk,” said Tsoy.