Kazakh Minister of Trade and Integration of Kazakhstan Bakhyt Sultanov is on his working visit to Washington to boost trade and investment ties between Kazakhstan and the United States, reports Strategy2050.kz. 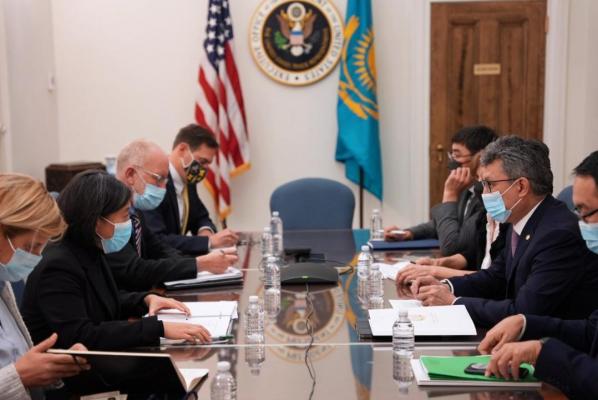 The Kazakh delegation arrived in Washington to take part in the meeting of the High-level Group on Economic Cooperation and discussion of trade and economic issues by U.S. trade agencies, as well as government agencies and organizations of the United States.

At meetings with U.S. Trade Representative Catherine Tai and representatives of the U.S. Department of Commerce, the sides discussed current issues of trade and economic relations between the two countries that prepare to celebrate the 30 anniversary of diplomatic relations. The sides noted that the two countries managed to overcome the negative impact of COVID-19 restrictions, and the volume of trade has almost reached the level of 2019.

The trade turnover between Kazakhstan and the United States in January to September was US$1.63 billion, compared to US$1.64 billion for the same period of 2019.

The Kazakh delegation and the U.S. government officials also discussed the factors that negatively affect the mutual trade.

Sultanov noted that the establishment of Permanent Normal Trade Relations, which refers to a legal designation in the United States for free trade with a foreign nation, between Kazakhstan and the United States is hindered due to the presence of the Jackson-Broom amendment. The cancellation of this amendment will contribute to bringing trade and economic relations between the two countries to a new level.

During Sultanov's meeting with the U.S. Trade Representative, Catherine Tai noted the role of the Kazakh side in building bilateral and multilateral cooperation within the Central Asian region. She stressed the commitment of the Washington administration to "deepening US trade relations with Central Asia."

The sides also discussed the upcoming 12th WTO Ministerial Conference at the end of November in Geneva, which will be chaired by Kazakhstan.

Sultanov expressed hope for reaching consensus on several issues during the conference, including the multilateral decision on the WTO response to the COVID-19 pandemic, the efforts of the United States in promoting the trade facilitation initiative, which contributes to the adoption by member countries of effective trade measures in response to the COVID-19 pandemic.

As the largest landlocked country, Kazakhstan is interested in developing transit potential and free movement of goods across its borders. To this end, Kazakhstan fulfills its obligations to the WTO and stands for the full use of the potential of the WTO Agreement on Simplification of Procedures for the promotion of goods critical during the pandemic.

During the meeting at the US Department of Commerce, the sides discussed the possibility of cooperation between American and Kazakh businesses in the field of extraction and processing of rare earth metals in Kazakhstan and agreed to exchange trade missions next year and create an informal working group to expand the range of traded goods and services.