The plant for the production of instant pasta, traditional pasta and broths under the brands "Rollton", "Big Bon" and "Petra" increased the volume of output by 85% compared to 2019, Strategy2050.kz reports referring to KAZAKH INVEST. 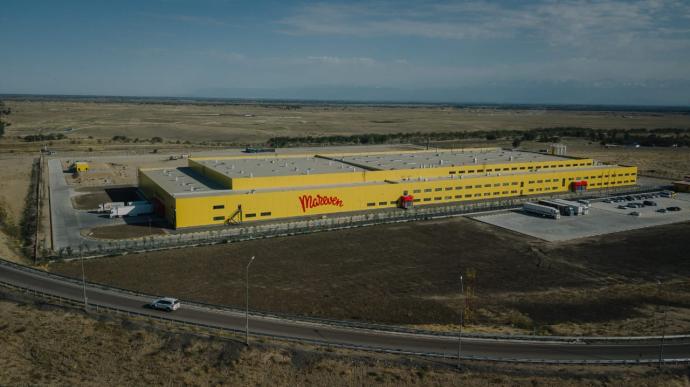 The "Mareven Food Tien-Shan" plant, located in Almaty region and implemented with the support of JSC "NC "KAZAKH INVEST", continues to increase production volumes due to a steady increase in demand for the company's products in Kazakhstan and the countries of the Central Asian region. Currently, the company produces and sells such product lines as instant pasta, traditional pasta, broths, mashed potatoes, sauces, and carbonated beverages. During the first half of the year, sales across the region increased by more than 30%, and production - including as a result of localization of the main product lines - increased by 85% compared to the same period last year.

Today, the factory is working in an enhanced mode and uses all resources to meet the increased demand for the company's products. The company's products belong to the category of consumer goods, so during the quarantine, the task is to maximize demand through stable supplies, products are shipped immediately as they are produced. It is worth noting that the level of exports of all products produced by the plant to Russia, Uzbekistan, Tajikistan, Turkmenistan and other countries is growing in accordance with the company's development strategy, and today it is already about 70%.

The company continues to increase the turnover of its products, for example, in February, the fifth line was launched at the plant. This line produces instant noodles under the brand "Big Bon" with flavors that have become very popular among consumers in Kazakhstan and Uzbekistan. Previously, "Mareven Food Tien Shan "imported" Big Bon "with the flavors" Chicken + Salsa sauce" and "Beef + tomato sauce with Basil" from the Russian factory, but with the growing demand from local consumers, it was decided to localize this product. Also, since the beginning of this year, the company has completely localized the production of traditional pasta products under the brand "Petra".

The volume of products produced on the "Big Bon" line today is about 85% of its productivity, i.e. the line operates at almost full capacity. In addition, with the launch of the fifth line, the number of jobs has also increased, and more than 100 people have been added to the staff. In total, the company currently employs about 500 employees.

It is worth noting that "Mareven Food Tien-Shan" produces a fundamentally new product for the market of Kazakhstan-carbonated breintonic drink "Actibo". At the start of the launch of this product, in September 2019, it was planned to be implemented in 5 cities of Kazakhstan. Today, the company not only covers almost the entire territory of Kazakhstan, but also exports Actibo to Kyrgyzstan, Uzbekistan, Tajikistan and Russia. In July, it is planned to export the first batch of this product to Ukraine.

In the near future, Mareven Food Tien-Shan plans to expand its product line under the brands "Rollton", "Big Bon" and "Actibo", expand its brand portfolio, enter new categories, which means that new jobs will be opened and support for local farmers will increase, since the company uses Kazakh wheat and salt in large volumes for the production of pasta, and local sugar for the production of Actibo breintonic.

"Mareven Food Tien-Shan" is a trade and production company in Kazakhstan which specializes in the development, production and promotion of a wide range of food products and their sale on the territory of the Republic of Kazakhstan and in the countries of Central Asia. These are such popular brands as" Rollton"," BIGBON " and others.