The seventh season – 2019/2020 was vivid and memorable. Sensational premieres, participation of the artists in international projects, the team’s successful tour – all this further strengthened Astana Opera’s position as an opera house of the highest level. COVID-19 interrupted the season at the very take-off. A number of grand premieres did not reach the audience. Gaetano Donizetti’s operas Don Pasquale, L’Elisir d’Amore, the ballet The Call of the Steppe to Tles Kazhgaliyev’s music have been postponed and will be presented in the new, eighth season, Strategy2050.kz reports referring to Astana Opera's press service. 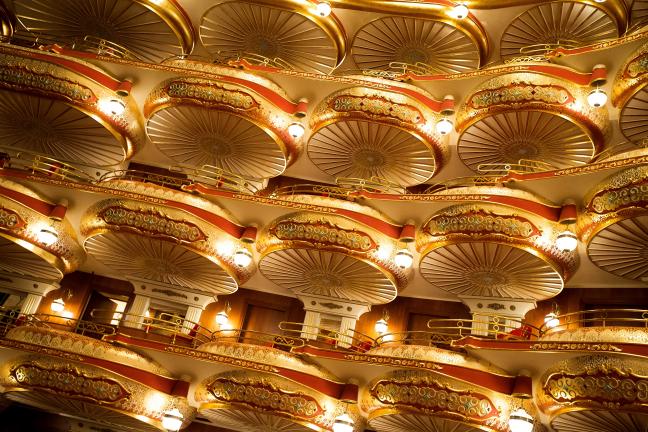 For Astana Opera enthusiasts, the creative team held 185 events, 20 of which were for children. During the quarantine period, 15 online projects were implemented, and 41 performances were webcast on TENGRI TV. The opera house’s work was actively covered in the media, and, according to statistics, about 3 thousand materials were published in the press during the 7th season.

A New Wealth of Productions

The opera house reached the end of the seventh season with important achievements. With the support of the Ministry of Culture and Sports of the Republic of Kazakhstan, the team presented 3 premieres for high art connoisseurs:

Giuseppe Verdi’s opera Don Carlos (October 11, 13). The success of this production is due to the great merit of its ‘key figure’ – Music Director and Conductor, Honoured Worker of Kazakhstan, laureate of the State Prize of the Republic of Kazakhstan, famous Maestro Alan Buribayev. Principal Soloists, choir, orchestra and supernumeraries showed high skill, professionalism and impeccable performance.

In the same month, the Kazakh opera house took part in the first Dmitri Hvorostovsky Festival, designed to preserve and maintain cultural heritage of the outstanding singer. On October 23 and 25, Kazakh artists presented a grand production of Tchaikovsky’s opera masterpiece Eugene Onegin, dedicated to the great composer’s 180th anniversary, at Hvorostovsky Krasnoyarsk State Opera and Ballet Theatre. On October 24, a fascinating symphonic program of Kazakh composers’ works was featured for the audience at the Big Concert Hall of the Krasnoyarsk Regional Philharmonic. In addition, Beethoven’s Piano Concerto No. 5 in E flat major, op. 73 was presented on the occasion of the composer’s 250th anniversary.

Resuming old contacts and establishing new ones, Astana Opera hosted the tours of three Russian theatre collectives. On November 9 and 10, St. Petersburg Chamber Opera presented Verdi’s Rigoletto and Bizet’s Les Pêcheurs de Perles. The creative team from Saint Petersburg came to Nur-Sultan together with its Artistic Director – People’s Artist of Russia, laureate of the State Prize of the Republic of Kazakhstan, Holder of the Order of Dostyk Yuri Alexandrov, one of the founders of opera art in the capital. The famous director worked a lot with the company of the Kulyash Baiseitova Theatre, where he staged 13 opera productions.

As part of the Hvorostovsky Krasnoyarsk State Opera and Ballet Theatre tour, Borodin’s opera Prince Igor was held on November 29, and Glazunov’s ballet Raymonda, staged by the outstanding choreographer Yuri Grigorovich, was presented on December 1.

It is important to note that in 2020, the first tour of the Vakhtangov State Academic Theatre took place at Astana Opera. Stellar cast presented to the residents and guests of the capital popular productions from the the repertoire of one of the most famous drama theatres in Russia: on January 8 and 9 – scenes from Pushkin’s novel in verse Eugene Onegin, and on January 10 and 11 – Chekhov’s Uncle Vanya.

In addition, the soloists actively worked on the Astana Opera stage, many of them made their debuts in performances from the current repertoire.

On December 3, 2019, opera legend, Hero of Socialist Labor, People’s Artist of the USSR, USSR State Prize laureate Bibigul Akhmetovna Tulegenova celebrated her anniversary at Astana Opera. It was organized in collaboration with the Ministry of Culture and Sports of the Republic of Kazakhstan. Numerous fans were looking forward to meeting with the celebrated singer. International opera diva Bibigul Tulegenova received congratulations on her 90th anniversary. Guest singers – famous Kazakh opera soloists, laureates of Bibigul Tulegenova competition, her students – successors of her traditions, and also public officials took part in the celebration.

During the holidays, the opera house company regularly gives charity concerts in the “Medical and Social Institution for the Elderly and Disabled” KSU of the Nur-Sultan Akimat, as well as in the Specialized Children’s Home. Among other things, Astana Opera presented a series of charity concerts for the New Year’s Holiday. The artists created festive mood and delighted the disabled children from the Social Service Center, who were invited to the opera house.

Every year, the Astana Opera Chamber Hall staff expands children’s repertoire, shaping the musical tastes of the younger generation. Interesting concert programs for any age category were featured for the audience throughout the seventh season.

During quarantine, around 40 performances were webcast on TENGRI TV. The artists actively participated in the Quarantine Star project, organized by the Ministry of Culture and Sports of the Republic of Kazakhstan. Astana Opera also offered the viewers its own product – 15 online projects featuring artists of the opera house. Among them are: international online project Zhuravli, which was launched on Victory Day, Ballet: Everything You Need to Know, two episodes featuring Serik Nakyspekov, who spoke about ballet terms and special characteristics of modern dance. The concert Tchaikovsky. Online with the participation of musicians from Kazakhstan and Russia was presented on May 7 to the composer’s 180th anniversary. Dozens of artists performed Mereke Bi online. In addition, Astana Opera’s famous soloists and opera stars from Italy, Mexico, Japan, China, Romania, Georgia, as well as the Astana Opera Symphony Orchestra performed the sunny Neapolitan song ’O Sole Mio, beloved by millions of listeners worldwide. An important stage in the work of the team was the online project for the 175th anniversary of Abai Kunanbayev. Young artists of the children’s studio performed scenes from Bizet’s Carmen and Brusilovsky’s Kyz Zhibek online. Their adult colleagues, the Astana Opera Symphony Orchestra musicians under the baton of Maestro Abzal Mukhitdin, performed an overture from Bizet’s opera Carmen, also online. Opera diva, Astana Opera’s Principal Soloist Maira Mukhamedkyzy performed Vangelis’ The Pray of the World – a dedication to all the doctors around the world. The team also created other interesting projects that are available on the opera house’s YouTube channel.

Plans for the Future

There are plans to begin the new theatrical season in the opera house no later than the end of September, the epidemiological situation permitting. Exciting premieres, engrossing concerts at the Chamber Hall will be presented to all high art connoisseurs. Further still, meetings with beloved artists, autograph sessions and much more awaits the audience. 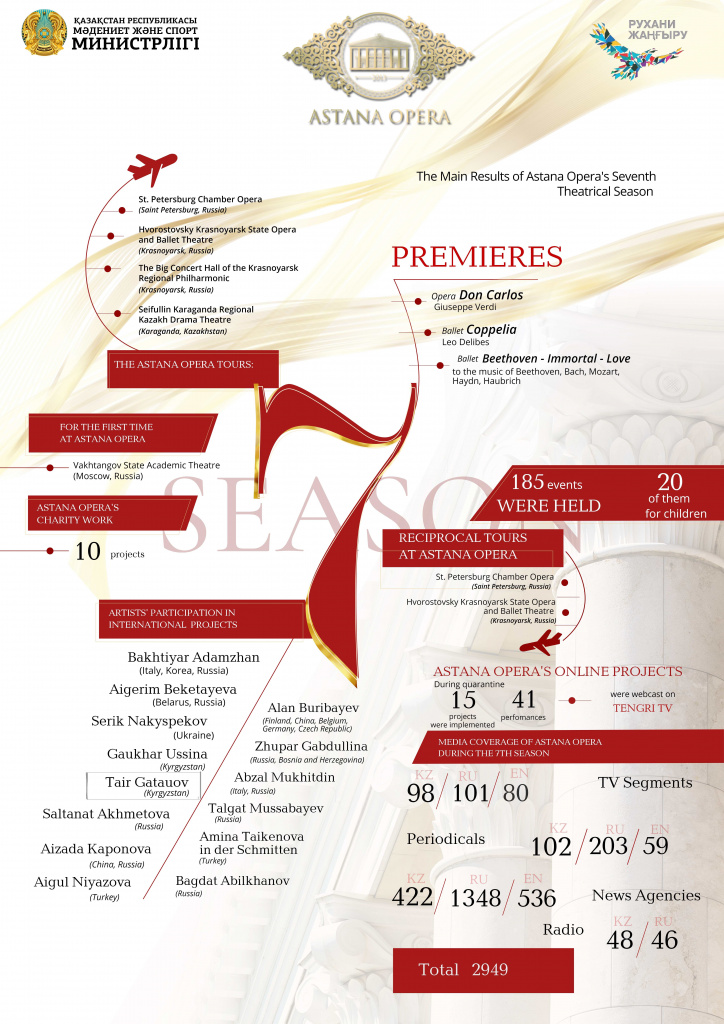