Minister of Foreign Affairs of Kazakhstan Mukhtar Tleuberdi received Ambassador of Korea to Kazakhstan Kim Dae-Sik due to completion of his mission, Strategy2050.kz reports with reference to the press service of the Ministry. 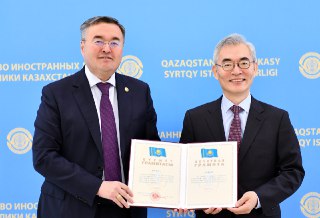 The Minister awarded the Korean diplomat with the state award “Certificate of Appreciation of the Republic of Kazakhstan” for his contribution to the development of bilateral relations between Kazakhstan and South Korea.

Mr. Tleuberdi thanked Kim Dae-Sik for his fruitful work as the Ambassador and wished him success in the diplomatic sphere.

Kim Dae-Sik was appointed the Ambassador in April 2017. He is one of the initiators of the new “Fresh Wind” economic program, which was adopted in April 2019 during the state visit of President of Korea, Moon Jae-In, to Kazakhstan.