Kazakhstan’s effective involvement in implementing European development programs under the new EU Strategy for Central Asia can become one of the important tools for ensuring the sustainable development of the country and the region as a whole, which was the main idea of the talks between Kazakh Foreign Minitser Mukhtar Tleuberdi and EU Special Representative for Central Asia Peter Burian, who is in Nur-Sultan to attend the 5th anniversary meeting of the Astana Club, the Kazakh Foreign Ministry’s press service informs. 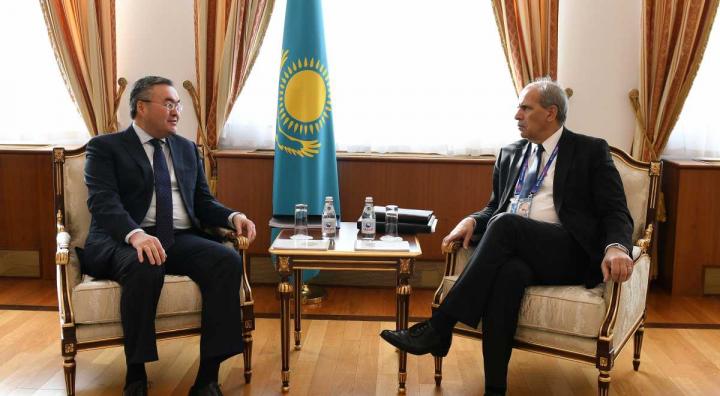 The interlocutors exchanged the views on wider pressing issues of the international and regional agenda, including the greater partnership between Kazakhstan and the European Union in such promising areas as environment, digitalization, humanitarian exchanges and sustainable interconnectedness.

The Kazakh foreign minister stressed that 2019 has become an important year in the history of bilateral relations in the light of the adoption of the new EU Strategy on Central Asia and the end of the ratification of the Enhanced Partnership and Cooperation Agreement between Kazakhstan and the EU (EPCA), signed on 21 December 2015 in Nur Sultan.

“We have high hopes for these strategic documents, which usher in a new stage in Kazakh-European relations. I express confidence that their successful implementation, first of all, will lead to the growth of mutually beneficial trade, economic and investment cooperation between Kazakhstan and the European Union,” the Kazakh foreign minister said.

The European diplomat, on his part, pointed out that Kazakhstan is perceived by the European Union as an important partner in the context of the implementation of the Central Asia Strategy. He welcomed the contribution of the country to strengthening political, trade and economic cooperation, international security in Central Asia and Afghanistan.

In that context, the European side informed about the launch of three new programs for the region with a total budget of 55.6 million euros, aiming at supporting investment, competitiveness and trade in Central Asia.

The parties agreed to maintain regular working contacts in order to realize the potential of constructive cooperation of the European Union with Kazakhstan and the region.