Kazakhstan shared its experience in the dialogue of cultures, religions and civilizations, as Chair of Nursultan Nazarbayev Center for the Development of Interfaith and Intercivilization Dialogue participated in the 31st session of the international conference named "Dialogue of Religions and Cultures" on March 13-14 at the invitation of Egypt's Minister of Awkaf Muhammad Mukhtar Juma. 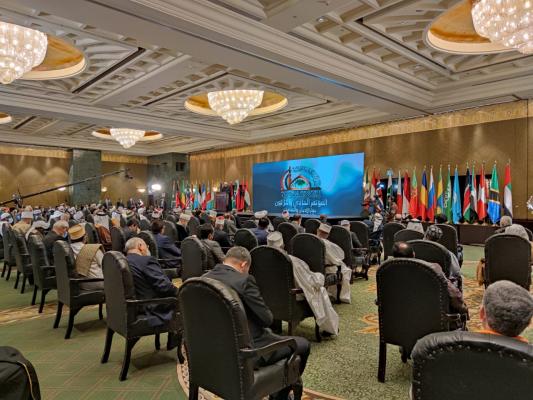 During the international conference, experts from leading think tanks, universities, representatives of religious associations, international organizations, and foreign governments explored the development of the religious situation in the world, the ways to strengthen interreligious, intercultural dialogue and spirituality in a rapidly changing world amid the COVID-19 pandemic.

The Kazakh delegation included Chair of the Spiritual Administration of Muslims in Kazakhstan Nauryzbay kazhy Taganuly, President of the Egyptian University of Islamic Culture (Nur-Mubarak) in Kazakhstan Muhammad al-Shahat al-Jindi, and researchers.

In his remarks, Bulat Sarsenbayev noted the importance of the international conference that provided an opportunity to gather international experts from 35 Arab and Muslim countries and other states to discuss key issues in the field of religion.

Sarsenbayev emphasized that Kazakhstan constantly calls on all countries and their leaders to take preventive measures to prevent crises, particularly in the spiritual and religious sphere.

“As you know, the Arab Republic of Egypt is an important partner in the Middle East region, the Arab world and the Muslim community for Kazakhstan. The most important thing for us in the experience of Egypt is the understanding that the problem of maintaining social and religious balance cannot be solved only by the forces of state institutions.  This requires a broad dialogue between the leaders of the world and traditional religions, whose spiritual mission in achieving harmony and security can hardly be overestimated,” he said.

Sarsenbayev noted Egypt was among the first to support Kazakhstan in convening the Congress of Leaders of World and Traditional Religions initiated by Kazakhstan’s First President Nursultan Nazarbayev.

Over the 30 years of independence of Kazakhstan, the dialogue platform evolved into an effective tool for the development of a dialogue between religions, cultures and civilizations, he added.

As part of his visit, Sarsenbayev held talks with senior spiritual leaders of Egypt. He spoke about the nation’s experience and the role of its leadership in preserving and ensuring interfaith and inter-civilizational dialogue and developing an effective strategy of peace and harmony between confessions and peoples.

He also raised the issue of the preparation to the XIX Secretariat of the Congress in 2021 and the organization of the next VII Congress of Leaders of World and Traditional Religions scheduled for 2022 with the participation of Kazakh President Kassym-Jomart Tokayev and Kazakhstan’s First President Nursultan Nazarbayev.