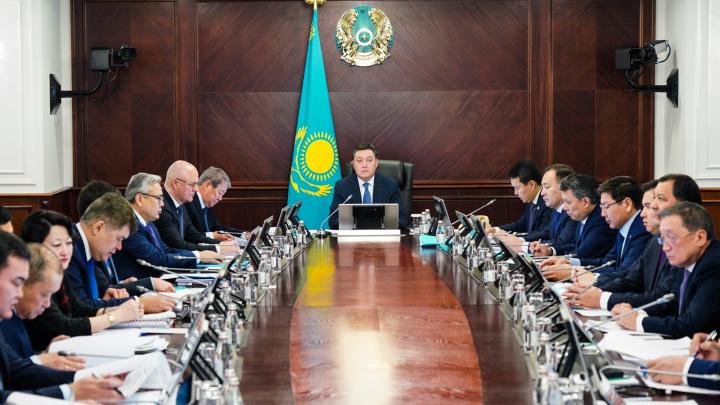 “Improving a business climate is key to developing SME that can be done through state support, legislative improvements and simplified regulation environment. Developed countries have SMEs contribute 50% of GDP, in different countries it varies from 30 to 69%,” he said.

2019 saw the SME share account for 29.5% of the Kazakh economy. According to the minister of national economy, it is important to raise this figure to up to 50% by 2050 in a bid to comply with the OECD countries.

Due to a big number of SMEs in developed countries, their contribution to economy is great. The minister also underscored that SMEs also promote employment, saying that most jobs are created through them.

The Kazakh national minister pointed out the importance of improving the legislation and regulation environment using the OECD standards as guidance.

“Kazakhstan ranks among 20 countries from 190 in terms of the best business climate,” he said.

Secondly, on the instruction of the Head of State, there is a moratorium on checks and tax payment for micro and small businesses. So over 1 million of micro and small enterprises are expected to save 382 billion tenge within 3 years, thus reducing administrative burdens and facilitating business.

Thirdly, the norms to implement the presumption of good faith are in place. All unsolved issues finally will be in favour of businesses. Also, a transitional period is put in place so if the requirements for business change, then they shall be implemented over a certain period for businesses to get prepared. Oversight organs will have to make reports, which is planned to be held on the same day each year.

“In an effort to meet the tasks put forward at the expanded governmental session, the 8th package of reforms for improving the business climate needs to be adopted, as well as aservice named Government for business, and the Smart regulation tool should be in place,” he said.

According to the national economy minister, the mentioned measures will contribute to running business.

“The 8th package of reforms aimed at improving the business climate lays out the legislative amendments to create favourable conditions for business development, registration of VAT payers will be sped up, as well as opening up bank account online, while unnecessary overlapping notifications on a certain services will be eliminated. As for legal entities information on movable property will be disclosed to ensure safety of transactions,” he said.

The Service Government for business foresees a new format of interaction among the Government and businesses due to be introduced using the principle of a single service office. Such an office will provide entrepreneurs with wider services regarding business development, competence building and financing issues.

“The smart regulation tool is modelled after developed countries. It will enable to reduce excessive liabilities, restrictions, as well as cut unnecessary expenses for business. Smart regulation is about a service model when interacting with businesses, system automatiasation, risk management and smart de-regulation,” the minister said.

Before introducing a new requirement an analysis on its effects on businesses shall be conducted, which must be carried out in a new form so as to include less regulation, a principle of one new function instead of two old ones. Thus, we will end up with a quality regulation environment, and finally with an improved business climate.

The Prime minister has spoke of the measures and programmes designed to promote business development and entrepreneurial activity as effective.

“There must be work done to satisfy the tasks set by the Head of State. The 8th package of measures for improving the business climate needs to be adopted before this June and the Parliament's work need to be sped,” he said.

The Kazakh PM also directed the Government for Business service to be finished by 1 July, which makes the obtaining of state support mesures for entrepreneurs easy through the single window principle.