Economic growth and ongoing urbanization are the reasons for annual increase in solid waste, which is one of the acute environmental issues for any country. Kazakhstan is not an exception as it envisages waste recycling at 40% in 2030 and at 50% in 2050 under the Green Economy Transition Concept. Today, the Forum has been held by the Chamber of Commerce and Industry France Kazakhstan titled “Strategy of Kazakhstan for Waste Management” in the Kazakh city of Nur-Sultan, Strategy2050.kz correspondent reports. 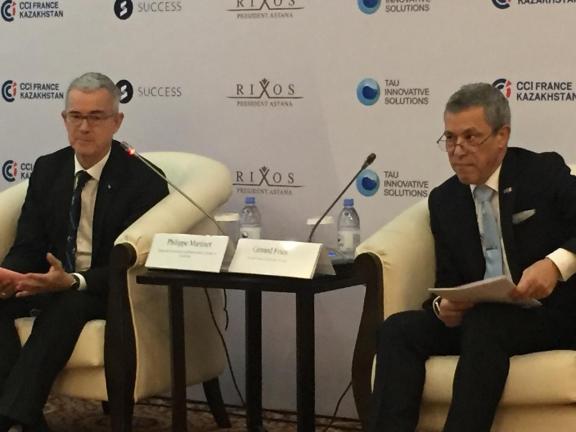 Opening the Forum, Mr. Philippe Matrinet stressed that the Chamber of Commerce and Industry France Kazakhstan (CCIFK) is a key partner of the French embassy in Kazakhstan in the development of relations in terms of economy.

“Today’s topic is urgent. Our country can share its best practices, speak about our legislation. France has been working on the legislation issues for long. Under our environmental law in order to switch to a green economy, we have set a goal to halve the number of storage spaces by 2025,” the French ambassador said.

He went on to say that 16% of French people have a stake in startups in the field of waste management.

“The economy that will reuse materials in the future needs to be developed. France has 16% of its population willing to set their own startups up in the area, compared to 11.7% in other European countries, and 11.6% in the USA. There is the Innovation Development Neighborhood in Paris, where 15 innovation projects underwent tests to further use them in practice. One of these 15 projects named CycleUp is designed to serve as a platform to reuse materials within one neighborhood,” he said.

On his part, Sergey Urcha, managing director of Operator ROP, explained that the concept of ROP, which is expanded producer responsibility in English, has been implementing since 2016 and covers certain types of products.

According to him, an electronic waste recycling fee is not imposed on new purchases of electronic products in Kazakhstan. The producer and importers take formal responsibility alone with a zero waster recycling fee.

“The objectives of Operator ROP were set by the Ministry of Ecology and drawn up in the Operator’s new strategy. The main aim is to create a system of comprehensive waste management focusing on minimizing the impact of waste on the environment, reusing waste,” he said.

Mr. Sergey Urcha stopped at the projects being under implementation since 2016 by Operator ROP.

“One of such projects is auto-recycling, implying the collection, recycling of old cars. Under the project, each region houses specialized posts receiving cars as well as a recycling facility, which is the only such facility focused on full recycling of old cars in Central Asia,” he said.

The project aims at recycling 50 thousand old cars each year. There are over 17 facilities recycling tires that recycle tires to produce crumb rubber used when constructing sports grounds in surfaces, including injury-proof ones.

Operator ROP carries out outreach activities as it sees one of its tasks to educate people to manage waste.

Ahmetzhan Primkulov, vice minister of ecology, geology and natural resources of Kazakhstan, informed that the poll shows recycling issues are the second largest area of concern after atmosphere pollution issues.

“For us, the newly established ministry engaged in environment protection, it is crucial to find ways of recycling waste together,” the vice minister said.

He expressed the willingness to adopt France’s experience in waste management.

“The Ministry is finalizing a new version of the Environmental Code. Under which, we envisage some measures to improve the situation regarding waste recycling. We are switching to the European waste framework to clearly classify waste. This is in line with the requirements of the OECD countries,” the vice minister said.

According to his, the abovementioned measures are designed to give momentum to the sector.

The Forum was held by the Chamber of Commerce and Industry France Kazakhstan, which unites both countries’ companies, their representative’s offices to foster and strengthen business relations between the two countries. Its membership includes over 40 Kazakh, French and international companies operating in Kazakhstan.