Development of the tourism sector has been a priority for the government of Kazakhstan and part of the efforts focus on developing five of Kazakhstan’s major sights included in the UNESCO (The United Nations Educational, Scientific and Cultural Organization) World Heritage Sites list, reports a Strategy2050.kz correspondent. 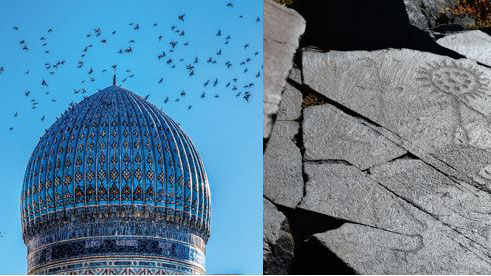 Three of world heritage properties located on the territory of Kazakhstan are cultural properties -  Mausoleum of Khoja Ahmed Yasawi (listed in 2003), Petroglyphs within the Tamgaly archeological landscape (2004), Silk Roads: the Routes Network of Chang'an-Tianshan Corridor (2014), and the two are natural properties - Saryarka – Steppe and Lakes of Northern Kazakhstan (2008) and Western Tien-Shan (2016).

The process to include sights on the list is a long one and to be eligible to do so, the state must ratify the World Heritage Convention adopted by UNESCO in 1972. Kazakhstan ratified the Convention in April 1994, making its historical sites eligible for inclusion on the list.

“Noting that the cultural heritage and the natural heritage are increasingly threatened with destruction not only by the traditional causes of decay, but also by changing social and economic conditions which aggravate the situation with even more formidable phenomena of damage or destruction, and considering that deterioration or disappearance of any item of the cultural or natural heritage constitutes a harmful impoverishment of the heritage of all the nations of the world,” reads the text of the Convention.

There are currently 1,121 special places around the world in the list.

The sights included in the list and their protection are therefore deemed important not only for a single nation where they are located, but also defined as the duty of mankind to prese3vr it for future generations to come.

The mausoleum was the first sight included in the list in 2003. 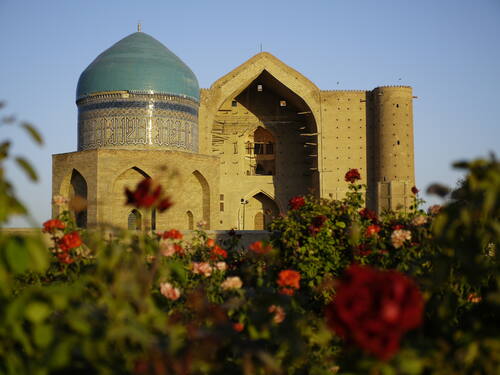 Located in the city of Turkistan in southern Kazakhstan, the masterpiece of medieval architecture remains an important pilgrimage site. Many people visit Khoja Ahmed Yasawi mausoleum to pay tribute to the Sufi teacher Khoja Ahmed Yasawi, who lived in the 12th century and had a significant influence on the school of Sufism throughout the Turkic speaking world and had many students, his followers.

The mausoleum was built between 1389 and 1405 by the order of Timur (Tamerlane), the ruler of Central Asia, but the construction stopped in 1405 when Timur died. The building was never completed.

Prominent Kazakh rulers, such as Abulkhair Khan, Abylai Khan and Yessim Khan, and Kazakh judge Kazbek-bi - are buried inside the mausoleum.

Along with spiritual significance, the mausoleum is also outstanding in its architectural design depicting the many experiments of Persian masters working on the building.

“Its innovative spatial arrangements, vaults, domes, and decoration were prototypes that served as models for other major buildings of the Timurid period, in particular in Samarkand. It was left unfinished, providing documented evidence of the construction methods at that time and by having a unique architectural image,” reads the description of the mausoleum on the UNESCO website.

Petroglyphs within the Tamgaly archeological landscape

The Tamgaly petroglyphs were inscribed in the list a year after the mausoleum. It is located some 170 kilometers from the city of Almaty. 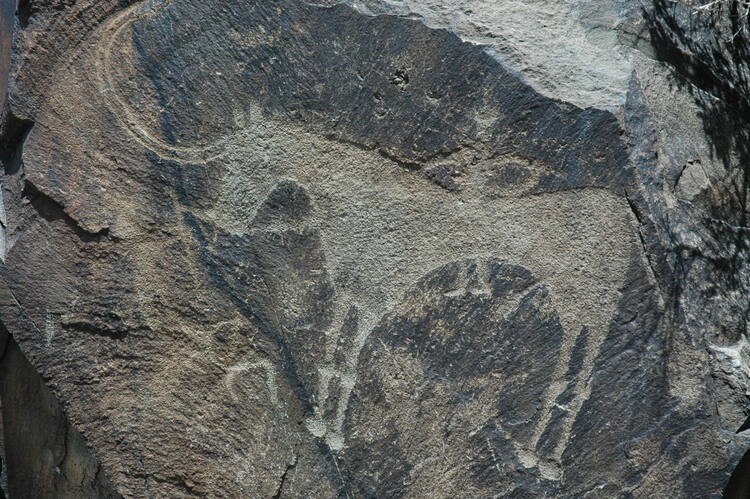 Tamgaly is estimated to comprise some 5,000 petroglyphs carrying the earliest periods of history. Most of the petroglyphs date back to the Bronze Age, depicting animals, sun deities, hunting scenes, and different rituals.

UNESCO notes all factors posing a threat to the preservation of pristine condition must be addressed, including the geological formation of the rocks, water ingress, and its salinity.

“These decay factors are also exacerbated by the extreme variation in temperatures daily and seasonally. There is also a threat of earthquake activity in the Almaty region, and fires in the steppes. In terms of human factors, uncontrolled visitation and graffiti pose a threat to the integrity of the component parts,” said the website. 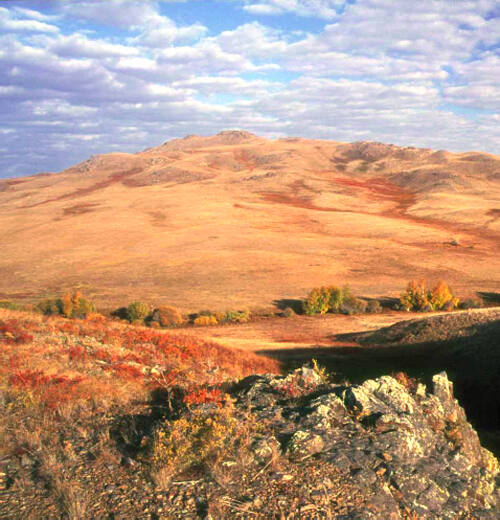 The nature reserves are important for many migratory waterbirds, including globally threatened ones. Among them are the rare Siberian white crane, the Dalmatian pelican, and Pallas’s fish eagle.

“These wetlands are key stopover points and crossroads on the Central Asian flyway of birds from Africa, Europe and South Asia to their breeding places in Western and Eastern Siberia. The 200,000-hectare Central Asian steppe areas included in the property provide a valuable refuge for over half the species of the region’s steppe flora, a number of threatened bird species and the critically endangered Saiga antelope, formerly an abundant species much reduced by poaching,” reads the website.

Narzum nature reserve is located in the Kostanai region in northern Kazakhstan, around 400 kilometers north from the Kazakh capital Nur-Sultan. It was established in 1931 and is unique in its landscape and pristine nature and diversity of flora.

Korgalzhyn nature reserve is located in the Akmola and Karaganda regions. It is considered an important wetland, part of the migration route for birds, including well-known pink flamingos.

This site became part of the UNESCO list in 2014. It refers to a 5,000-kilometer section of the vast Silk Road network between Chang’an/Luoyang regions in China to the Zhetysu region in southern Kazakhstan. 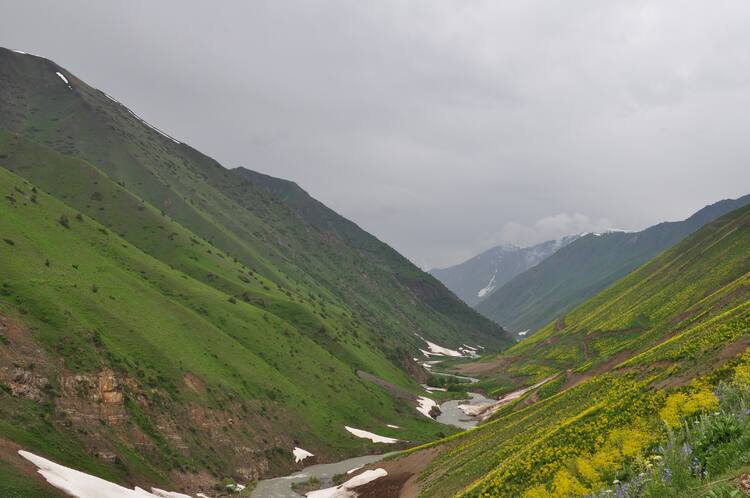 Its importance spans centuries shared by China, Kyrgyzstan, and Kazakhstan.

“It took shape between the 2nd century BC and 1st century AD and remained in use until the 16th century, linking multiple civilizations and facilitating far-reaching exchanges of activities in trade, religious beliefs, scientific knowledge, technological innovation, cultural practices and the arts,” reads the website.

It consists of 33 important sights along the corridor, such as ancient capital cities and palaces, trading settlements, temples, mountain passes, and some sections of the Great Wall, tombs and religious buildings.

Western Tien-Shan has been the latest among the sights included in the list in 2016. It is part of the Tien-Shan mountain system, one of the world’s largest mountain ranges, with an altitude from 700 to 4,503 meters. 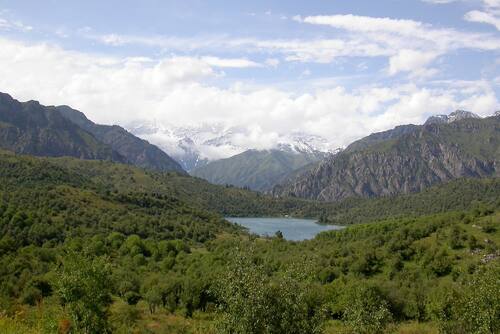 The area is characterized by rich biodiversity and deemed important for originating several cultivated fruit cops, forest types and other plants.

Shared with Uzbekistan and Kyrgyzstan, the property includes the Aksu-Dzhabagly and Karatay Reserves, the Sairam-Ugam National Park in Kazakhstan), the Padisha-Ata, Besh-Aral and Sary-Chelek Reserves in Kyrgyzstan and the Chatkal Biosphere Reserve in Uzbekistan.