As countries worldwide are still reeling from the consequences of the pandemic and the spread of the Delta variant, getting economies back on track remains a priority task for many to succeed in this exhausting fight. At the recent government meeting, Kazakh Prime Minister Askar Mamin said the country’s economy is steadily recovering, reports Strategy2050.kz. 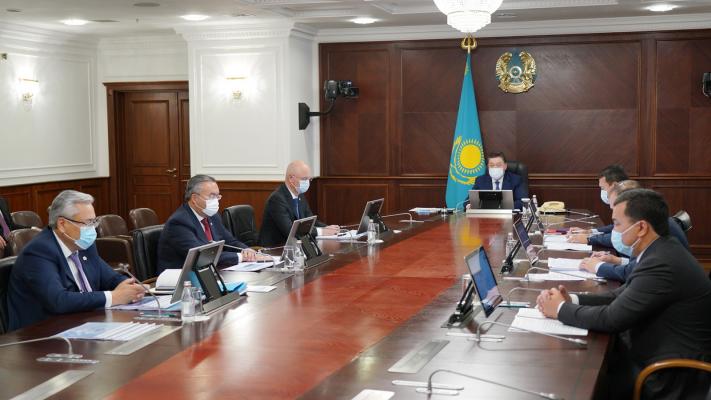 At the end of the seven months, the country’s GDP growth reached 2.7 percent.  The real sector of the economy remains the main driver of growth, including the industry (up by 2.5 percent), construction (up by 11.1 percent), as well as stable growth rates in agriculture (up by 2.4 percent).

High growth rates were in the construction sector (11.1 percent) and in the commissioning of housing (10.3 percent) - 7.7 million square meters were commissioned over this period.

Despite the continued restrictive measures, the growth rate in the service sector (up by 2 percent) continues to increase due to the high dynamics in trade (up by 9.1 percent) and communications (up by 12.5 percent).

"All regions need to ensure the achievement of the planned indicators of socio-economic development and effective implementation of the tasks set by the Head of State Kassym-Jomart Tokayev," said A. Mamin.

Trends in the financial market

In its June report, the National Bank of Kazakhstan estimated the annual inflation at 7.9 percent, and in the structure of inflation, prices for food products in annual terms increased by 10.6 percent, non-food products - by 6.9 percent and for the services - by 5.6 percent.

The gross international reserves of the National Bank decreased by 3.9 percent in June 2021 and amounted to $35.0 billion, which was due to the declining gold prices.

“The sale of gold for US$1.5 billion at a favorable price was held as part of the National Bank’s efforts to hedge part of the gold portfolio against a sharp decrease in its price. Assets in freely convertible currency increased due to the sale of unallocated gold,” said the report.

Kazakhstan’s international reserves, including the National Fund's foreign currency assets of $57.3 billion, made $92.4 billion at the end of June.

The total volume of tenge - U.S. dollar transactions amounted to US$14.1 billion, including the volume of exchange trading on the KASE (Kazakhstan Stock Exchange) of US$3.2 billion.

On August 11, Moody's Investors Service upgraded Kazakhstan's local and foreign currency long-term issuer rating to Baa2 from Baa3 and changed the outlook to stable from positive.

The report said Kazakhstan's public finances and credit profile demonstrated stability, which is consistent with the Baa2 rating level countries.

“This resilience is underpinned by the size and effective use of the country's sovereign wealth assets, which Moody's expects will grow and continue to exceed the level of government debt for the foreseeable future, as well as the lengthening and ongoing track record of credible enhancements to the macroeconomic policy framework that promotes external stability,” said Moody’s.

Moody's also commended the country’s countercyclical fiscal policy that allowed to limit the contraction of real GDP in 2020.

The agency expects Kazakhstan's economy to grow 3.5 to 4 percent in 2021 and by 4 to 4.5 percent in 2022. According to Moody’s, the ongoing institutional and economic reforms in Kazakhstan have the potential to strengthen governance and improve the investment attractiveness of the country.

“Large sovereign external buffers in the form of the state oil fund's (National Fund) and central bank's (National Bank) external assets are a key rating strength for Kazakhstan. (...) Sovereign net foreign assets are significantly larger than the current 'BBB' median (-2.3 percent of GDP), forecast to be 40 percent of GDP at end-2021 and to moderate slightly to 33 percent by 2023 as National Fund savings are used to support the economic recovery and oil receipts recover only gradually,” said Fitch.