Kazakhstan made improvements in World Bank’s Control of Corruption indicator

Kazakhstan made significant improvements in the Control of Corruption indicator, which is one of the six key dimensions of governance assessed by the World Bank separately in 214 countries. Kazakhstan received 36.06 per cent in 2018, a year ago the indicator was 19.7 per cent, the Strategy2050.kz correspondent reports. 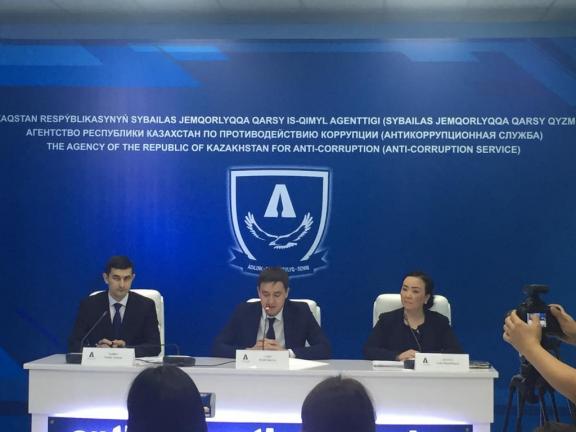 According to Leila Yildyz, assistance to the Chairman of the Anti-Corruption Agency, the development of international partnership is on top of the agenda, as well as is in line with the tasks given by the National Leader and the Head of State.

“Multilateral cooperation is of great importance as our country continues cooperating with the OSCE, UNDP, SCO, ADB, and others. The country also works with rating organizations as Transparency International. As you know, Transparency Kazakhstan conduced an independent survey to monitor the corruption situation, where half of a population of Kazakhstan stated improvements in the country’s corruption situation in recent years”, she said.

The business community also pointed out the improvements in the country’s corruption situation, with more than 76% of the entrepreneurs interviewed believing doing business without getting involved in bribery is possible, as well as working with a legal framework.

Kazakhstan seeks international assessments to curb corruption. One of them is the Worldwide Governance Indicators used by the World Bank in 214 countries.

“The World Bank’s Control of Corruption indicator is another tool to assess the level of corruption in 214 countries, which is one of the six key dimensions of governance, others include Voice and Accountability, Political Stability and Lack of Violence, Government Effectiveness, Regulatory Quality, Rule of Law”, he said.

The Worldwide Governance Indicators’ percentile rank indicates the country's rank among all countries covered by the aggregate indicator, with 0 corresponding to lowest rank, and 100 to highest rank.

“The 2018 data indicate Kazakhstan has made significant improvements in terms of Control of Corruption with 36.06 per cent, that is, 36% of the countries’ have worse corruption control level than in Kazakhstan. A year ago the indicator was 19.7%”, he said.

Finland has the highest rank according to control of corruption, followed by New Zealand, Ireland, Singapore, Sweden, and Norway.

“The World Bank’s Control of Corruption indicator is among the influential aggregate indicators, with many world experts asking to consider it as an alternative to Transparency International’s Corruption Perceptions Index”, he said.

To assess the control of corruption indicator uses 13 sources of preliminary information compared to 9 sources used in the Corruption Perceptions Index. Another striking difference between the two indexes is that TI turns to experts and entrepreneurs, while the World Bank engages experts, entrepreneurs, as well as public opinion.