Kazakhstan joins UN Human Rights Council, along with the US, India, Finland 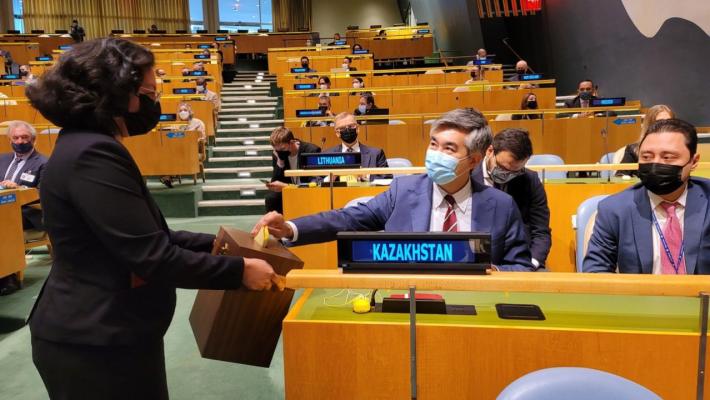 Along with Kazakhstan, Argentina, Benin, Cameroon, Eritrea, Finland, The Gambia, Honduras, India, Kazakhstan, Lithuania, Luxembourg, Malaysia, Montenegro, Paraguay, Qatar, Somalia, United Arab Emirates, and the United States of America have also been elected to the Human Rights Council (HRC) for the 2022-2024 term in an uncontested ballot of member countries by the UN General Assembly.

The Human Rights Council is an “inter-governmental body within the United Nations system responsible for strengthening the promotion and protection of human rights around the globe and for addressing situations of human rights violations and make recommendations on them.”

Announcing the results of the vote, Kazakhstan’s Ministry of Foreign Affairs said the priorities for Kazakhstan will be the promotion of gender equality and empowerment of women, the universal abolition of the death penalty, and the fight against all forms of intolerance, and promoting freedom of religion and belief.

Upholding and assuring inclusive and universal education, as well as respect for human rights in the context of the COVID–19 pandemic will also be on Kazakhstan’s agenda.

“The election of our country to the main human rights body of the world organization is a recognition of the role that Kazakhstan plays as an active and responsible Member State in the process of promoting international norms and standards in the field of human rights and protection of universal freedoms,” said the ministry.

It is not the first time for Kazakhstan in the council, as it was previously the council member for the term 2013–2015. As a rule, the members are elected from the five regional groups of the UN and serve for three years.

India was also re-elected into the council for its sixth term.

“Proud day for India. India gets elected to UN Human Rights Council by an overwhelming majority. As a democratic and pluralistic country adhering to fundamental rights, India will continue to further human rights issues. Thank you colleagues of all UN Member States for your support,” wrote the Permanent Representative of India to the United Nations. T. S. Tirumurti, in his Twitter.

.The United States has been elected into the council three years after former U.S. President Donal Trump quit the council.

“As I said at the UN General Assembly last month, we stand at an inflection point in history. The choices we make in the years ahead will determine the kind of world we leave to future generations. The United States stands ready to work with partners and allies to help lead the world toward a more peaceful, prosperous future, grounded in respect for human dignity,” said U.S. President Joe Biden in his statement regarding the U.S. election into the council.

He said the US will focus on “the rights of all, including women and girls, members of LGBTQI+ communities, members of ethnic and religious minorities, those living with disabilities, and members of other marginalized groups.”