Kazakhstan’s delegation led by Vice Minister of Culture and Sport Yeldos Ramazanov met with WADA Director General Olivier Niggli and WADA Asian Office Director Kazuhiro Hayashi. The meeting was held as part of the V World Anti-Doping Conference on Doping in Sport kicked off in Polish Katowice where over 1000 delegates from around the world gathered to exchange views on the fight against doping, Strategy2050.kz refers to the press service of the Committee for Sport and Physical Education. 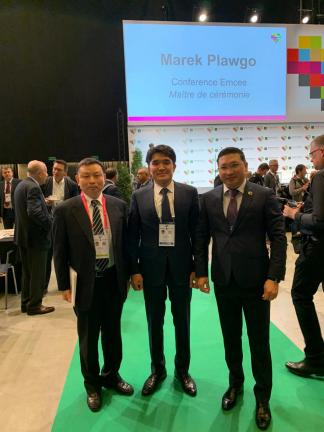 The Kazakh side spoke about the draft law on physical culture and sport, which is aimed at toughening the responsibility for violation of anti-doping rules, strengthening the status of the National Anti-Doping Organization.

Meanwhile, Mr. Niggli noted the effective work of the Government of Kazakhstan in this direction and expressed hope for further fruitful cooperation in the fight against doping.

It should be reminded that the draft law on physical culture and sport in the second reading was approved by the Mazhilis, at the moment the document is under consideration by the Senate of the Parliament of Kazakhstan.

In turn, director of the WADA Asian office, Kazuhiro Hayashi, spoke about the reform of the doping sample storage system.

“In the future, samples collected before the start of the Olympic Games will be stored for 10 years. It will be a global doping sample storage and reanalysis program”, Mr. Hayashi said.

In December 2017, WADA launched the process of revising the anti-doping code and international anti-doping standards. After about 2,000 amendments were processed, a modified version of the document was analyzed by leading world lawyers. The results of this study, which has been going on since 2017, will be the subject of discussions during a conference in Poland.