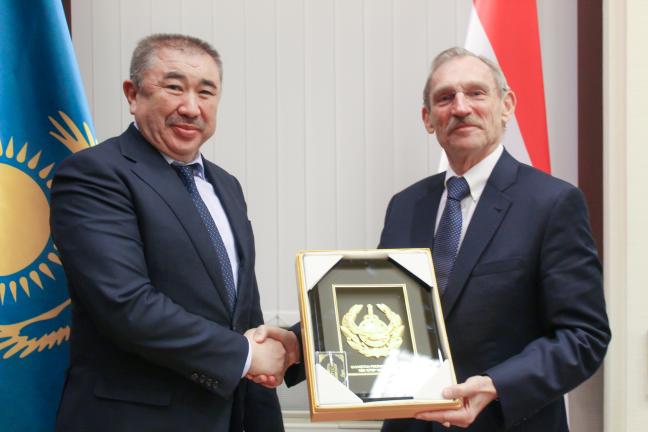 Both sides pointed out the development of the two countries' bilateral relations built on the common historical roots and spiritual relationship. Law enforcement cooperation was at stake.

The Kazakhstan-Hungary Intergovernmental Commission for cooperation in combating organized crime, terrorism, illicit trafficking of drugs and psychotropic substances touches upon the measures in the area of prevention and fight against crimes amid the increasing common threats related to terrorism and extremism, transnational organized groups, drug trafficking, and illicit migration.

The meeting also saw the ministers exchange the views on the reforms in the countries' police institutions. The Hungarian side updated on the reforms it carried out in 2015, generating much interest among the Kazakh side.

The Kazakh side also showed interest in the Hungarian police's experience in the transition to a service public model with a possibility of introducing such approaches in the country.

The Kazakh delegation toured the Law Enforcement Academy of Hungary's Ministry of Interior, as well as the Centre for Operational Control and Patrol Police in Budapest. Following the meeting the sides agreed to develop the cooperation and exchange experiences in policing.

The Kazakh Minister of Internal Affairs took part in the International Conference “Preventing Radicalism Leading to Terrorism: Regional Policy Measures and Risk Reduction”, which was held in Budapest.

The representatives from the UN and other international organizations, as well as the competent authorities of Hungary, Great Britain, the USA and Sweden, discussed issues of countering terrorist propaganda, the possibility of involving young people in the prevention and combating violent extremism, as well as the risks of the return of foreign terrorist fighters.

Addressing the conference, the Kazakh Minister of Internal Affairs informed about the strategy of Kazakhstan to counter terrorism and other contemporary challenges, focusing on key international initiatives of First President - National Leader Nursultan Nazarbayev. As a result, these initiatives ended with the signing of a Code of Conduct in September 2018 at the 73rd session of the UN General Assembly in New York aimed at achieving a world free of terrorism, with over 80 UN member states being signatories to the document for now.

One of the effective examples of countering international terrorism was the humanitarian operation to return the citizens of Kazakhstan from Syria, carried out under the personal control of President Kassym-JomartTokayev, as a result of which more than 500 Kazakh citizens, most women and children, were evacuated to their homeland. Upon their return, they receive the necessary assistance in rehabilitation and adaptation to peaceful life with the involvement of state bodies and non-governmental organizations.

At the same time, the persons fighting for international terrorist organizations were returned to Kazakhstan to be prosecuted.

Kazakhstan’s experience in returning its fellow citizens from war zones was highly appreciated by the UN General Secretariat and participants in the international conference.

The head of the Ministry of Internal Affairs also noted that Kazakhstan has launched comprehensive work to prevent the re-involvement of returnees in radical ideology and prevent its spread in correctional facilities.

A deradicalization system is being developed, a theological rehabilitation service has been created that works with prisoners.

“The Kazakh leadership is convinced that the global community needs collective measures to fight terrorism at the global level,” the Minister of Internal Affairs said.

In addition, the Minister of Internal Affairs of Kazakhstan, Yerlan Turgumbayev, met with the Under-Secretary-General of the United Nations Counter-Terrorism Office - Head of the Counter-Terrorism Directorate (KTD), Vladimir Voronkov.

The Kazakh Minister of Internal Affairs expressed his gratitude for the support provided by the UN Counter-Terrorism Office to promote the Code of Conduct for a world free of terrorism.

He informed about the Joint Action Plan for the Global Counter-Terrorism Strategy in Central Asia. While Vladimir Voronkov noted Kazakhstan’s leadership in implementing comprehensive measures to prevent terrorism and extremism, welcoming the contribution of Kazakhstan to regional security.