An official ceremony of presenting Credentials by the Ambassador of Kazakhstan, Zhanibek Abdrashov, to the President of the Republic of Hungary, János Áder, was held in the Sándor Palace in Budapest on December 6, 2019, the Kazakh foreign ministry reports. 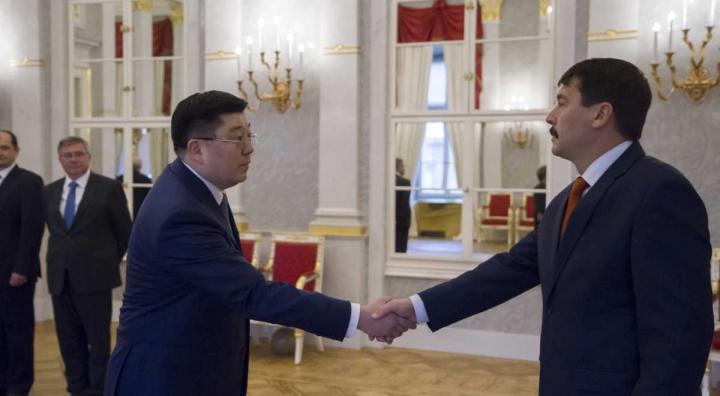 At the meeting held after the ceremony, the Ambassador conveyed the best wishes of the First President - Leader of the Nation Nursultan Nazarbayev and President of Kazakhstan Kassym-Jomart Tokayev to President János Áder.  Zh. Abdrashov informed the President about the socio-economic situation in Kazakhstan, measures for further reforming the country and the developing of Kazakhstan's society as outlined by the President K.Tokayev, in his Address in September 2019.

The sides discussed also the state and prospects of bilateral cooperation in trade, economic, cultural and humanitarian spheres, as well as international issues. In particular, the Ambassador stressed, that "the necessary contractual framework in the field of economy has been created between the countries, bilateral institutions, including the Intergovernmental commission for economic cooperation, the Business Council, the Kazakh-Hungarian direct investment Fund and the direct flight Nur-Sultan – Budapest, are successfully functioning".

President J. Áder noted the high level of bilateral relations and expressed readiness to further strengthen and develop the strategic partnership with Kazakhstan, which Hungary considers as a key partner in Central Asia.

At the end of the meeting, the Kazakh diplomat expressed readiness to make every effort to strengthen further the strategic partnership between the two countries. For his part, President J.Áder congratulated the Ambassador of Kazakhstan on the beginning of the diplomatic mission in Hungary and wished success in his further work.