6 December 2019 the capital of Slovakia, Bratislava, saw the ending of the 26th meeting of the Council of Ministers of Foreign Affairs of the member nations of the Organization for Security and Cooperation in Europe (OSCE Ministerial Council), strategy2050.kz informs with reference to the Kazakh foreign ministry. 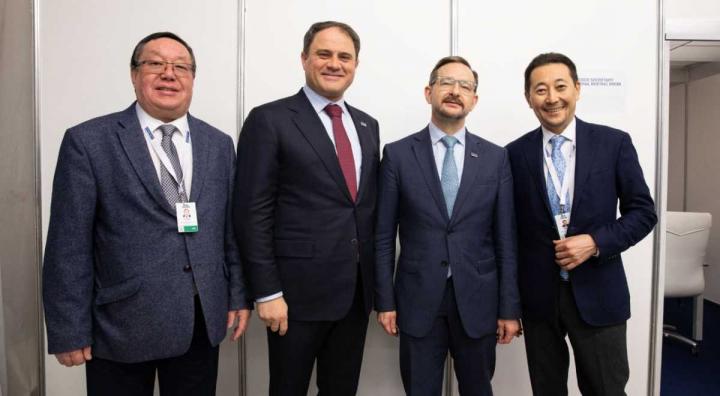 On the sidelines of the event, bilateral meetings of the head of the Kazakh delegation of the Deputy Minister of Foreign Affairs Roman Vassilenko took place to discuss pressing issues of the international agenda and bilateral cooperation with the OSCE.

During the meeting with the State Secretary of Ministry of Foreign Affairs of Slovakia - Special Representative of the OSCE Chairmanship Lukas Parizek, the fruitful interaction of the two countries in promoting the Organisation’s goals and objectives was emphasised. In particular, Slovakia backed the initiative of Kazakhstan to hold a “round table” on Afghanistan on October 9 this year in Nur Sultan in conjunction with the visit of the OSCE Permanent Representatives to Central Asian countries. This event demonstrated the importance of creating synergies between key international and regional organizations involved in the process of assisting Afghanistan, as well as Kazakhstan’s potential as a mediator. The meeting also spoke about the positive dynamics in bilateral relations, marked by visits to Kazakhstan in the outgoing year by Minister of Foreign Affairs of Slovakia Miroslav Lajčák and Chairman of the Parliament Andrej Danko.

A meeting was also held with the head of the Foreign Ministry of Albania, Gent Cakaj, whose country will chair the OSCE in 2020. The Kazakh diplomat expressed support for the upcoming Tirana mission, reaffirming the commitment of Nur Sultan to further strengthen cooperation with the OSCE.

During the conversation with the Permanent Secretary of State of the Ministry of Foreign Affairs of the Republic of Finland, Matti Anttonen, the President of Finland’s, Sauli Niinistö, planned visit to Kazakhstan at the invitation of President Kassym-Jomart Tokayev came under discussion.

With the Deputy Prime Minister - Minister for Foreign Affairs of Ireland, Simon Coveney, Roman Vassilenko discussed the prospects of strengthening the legal framework of bilateral relations and business cooperation, including the establishment of joint export production of agricultural products in Kazakhstan.

The OSCE Secretary General stressed the importance of the Astana Declaration adopted at the OSCE Summit in Kazakhstan in 2010, and also praised the contribution of Nur-Sultan in promoting the organization's values. The head of the Kazakh delegation informed the interlocutor of the measures taken by Nur-Sultan to build confidence and mutual understanding within the OSCE. In particular, this could be facilitated by a uniform base of the Organization’s structures throughout its area of ​​responsibility. As the First President, Elbasy Nursultan Nazarbayev, noted, this process can begin with the establishment of new institutions in various countries, including the Asian part of the OSCE. Therefore, Kazakhstan is promoting the initiative to create, in the confines of the Expo in Nur Sultan, the OSCE Thematic Centre for sustainable interconnectedness to bring the Organization’s work to a new level in the economic and environmental dimension.