The officials in Kazakhstan remain cautious about the epidemiological situation in the country after the studies confirmed the circulation of Delta variant in Kazakhstan and the rising cases in neighboring countries, reports a Strategy2050.kz correspondent. 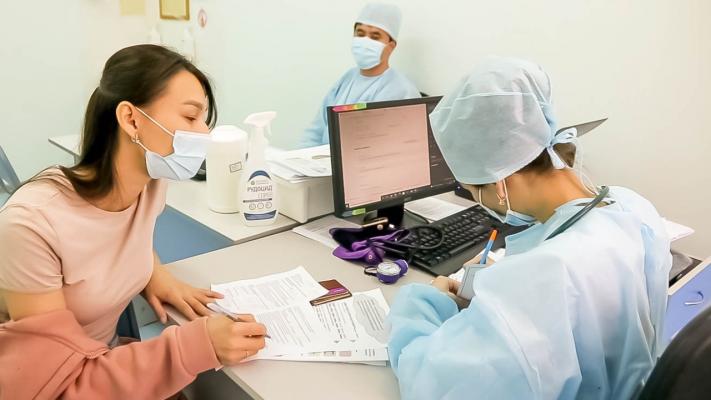 The rest of the regions are in the yellow and green zones.

Addressing the government meeting on Tuesday, Kazakh Healthcare Minister Alexey Tsoi said there has been a 39 percent increase in the number of cases over the past week driven by rising cases in Nur-Sultan and Almaty.

Nearly 33 percent of the eligible population had at least one dose of the COVID-19 vaccine.

The citizens have a choice between four vaccines – Russia’s Sputnik V vaccine produced in the Karaganda pharmaceutical plant, locally produced QazVac vaccine, Hayat Vax produced in the United Arab Emirates with China’s Sinopharm technology, and CoronaVac (Sinovac) vaccine that was delivered to Kazakhstan at the beginning of June.

“As of today, vaccination centers have enough vaccine doses - around 800,000 doses of the first component and 1.4 million doses of the second one. The supply of vaccines to the regions continues. I would like to note that the vaccination rate has increased 1.6-fold for the past week, from 254,000 to 405,000,” said Tsoi.

In the last week, the daily cases in Nur-Sultan increased from 350 to 620.

The emergence of the delta variant In Nur-Sultan prompted the city officials to reimpose restrictions cutting the working hours of cafes and restaurants and trade centers. Up to 80 percent of employees should also work from home.

The occupancy of infectious hospital beds in the capital stands at 65 percent and 74 percent in intensive care.

"The incidence rate for the last week increased by 65 percent compared to the previous week (3,544 versus 2,144 cases). The weekly intensive morbidity rate was 298.2, while R0 value is 1.315," said Nur-Sultan city’s chief sanitary doctor Sarkhat Beisenova.

"Given the spike in cases, PCR screening of positive samples from patients was taken, which tentatively showed a probable mutation of the delta variant in 56 percent of cases, which has high contagiousness, a short incubation period and has a high probability of hospitalization and mortality," said Beisenova.

She said non-compliance with quarantine measures as well as the low rate of vaccination allows the more contagious virus to spread in the city.

What do we know about the delta variant?

Delta variant is the most transmissible out of all variants reported worldwide, said WHO Director-General Tedros Adhanom Ghebreyesus.

“As some countries ease public health and social measures, we are starting to see increases in transmission around the world. More cases mean more hospitalizations, further stretching health workers and health systems, which increases the risk of death,” he said at a media briefing on June 25.

He emphasized the importance of equitable vaccination couple with tailored use of public health and social measures in addressing the spread of new variants.

Delta variant was first identified in India in October 2020 and has reached at least 95 countries, according to the WHO.

Even countries with high vaccination rates, like Israel, fell susceptible to the new variant that is close to becoming the dominant variant globally.

The WHO urged all people regardless of their vaccination status to wear masks and socially distance themselves.

Global efforts to address a spike in coronavirus cases

In the United Kingdom, the number of cases of the Delta variant hit a total of 75,953, according to the UK government data. The total number of coronavirus cases reached 4,755,078 in the country with daily 22,868 cases.

The number of people who have received the first dose of the COVID-19 vaccine is 44,454,511, more than 80 percent of the population, and the second dose - 32,583,746 people. Despite a relatively successful vaccine rollout, UK Prime Minister Boris Johnson announced the delay of the expected lifting of restriction by July 19.

He also promised to speed up the vaccine rollout. On June 18, vaccination opened up to every UK citizen over 18.

“3 in 5 adults across the UK have received two vaccine doses, vital in providing maximum protection from COVID,”  Johnson wrote in his Twitter account.

Israel, which has been one of the most successful examples in terms of vaccine rollout, has decided to reimpose the indoor mask requirement, days after it lifted this requirement.

It also delayed its decision to reopen the country for fully vaccinated travelers by one month.

Israel has had a total of 841,196 confirmed cases and 6,429 deaths from the coronavirus since the pandemic began. 64 percent of the country’s 9 million population received at least one dose and 59.6 percent has been fully immunized against the virus.

More than 10 million in four of Australia's eight capital cities, including Perth and Brisbane, were forced to stay home except for urgent reasons and essential needs in the government’s effort to curb the spread of the highly contagious delta variant.

“Across Australia, a number of new community outbreaks have appeared in Greater Sydney, Brisbane, the Sunshine Coast, the Darwin region, and the Perth-Peel region. Concerningly a number of these outbreaks are linked to the delta variant which has significantly higher transmissibility,” said Australian Prime Minister Scott Morrison in a press statement.

Since the pandemic began, a total of 30,528 COVID-19 cases have been reported in Australia, including 910 deaths.

Australia has administered nearly 7.4 million doses of COVID-19 vaccines. Nearly 28.6 percent of the country’s population aged 16 and over had at least a first dose of a COVID-19 vaccine.