KazMunayGas National Company and Air Liquide, a leading French corporation, promote cooperation by signing an agreement during the Kazakh-French Investment Forum taken place on 8 October 2019 in Paris. The document provides for the construction an installment producing compressed air and nitrogen and their long-term supply to the gas and chemical complex in Atyrau region that is under construction. So, the company’s direct investment in the Kazakh economy will be around 200 million dollars, Startegy2050.kz informs with reference to the Kazakh Foreign Ministry. 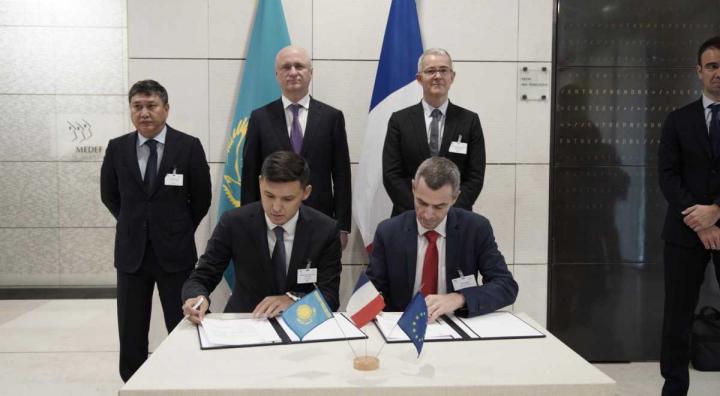 The Kazakh delegation led by Deputy Premier of Kazakhstan Rman Sklyar and over 100 French business representatives took part in the Forum held by KazakhInvest and the MEDEF Association of Entrepreneurs with support of the Kazakh Embassy in France. Opening the event, Sklyar marked an unprecedented level of mutual trust, commitment and strategic partnership established during the 27-year cooperation among the two countries. He called on the French businesspersons to actively cooperate in the priority areas such as digitalization, agriculture, agro-industry and alternative energy.

On his part, Pascal Loro, Special Representative of France for Economic Diplomacy in Central Asia said that Kazakhstan, being at the center of the Great Silk Road is a key economic partner of France in Central Asia and links Europe and Asia.

“Today’s global forum alongside other forums on priority areas of partnership held in March and September this year in Cannes and Rennes is essential in deepening our bilateral relations and strengthening our strategic partnership,” he said.

France’s economic structures and business circles’ representatives commended Kazakhstan’s measures in creating a fovourable investment climate. According to Co-Chair of the Kazakh-French Business Council Yves Louis Darricarrere, the effective measures in investment protection and encouragement contributed to the growth in French projects carried out in Kazakhstan.

France is among Kazakhstan’s top 5 trade and investment partners, with France’s investment exceeding $12.5 billion and the mutual trade turnover standing at $50 billion since 2008. There are over 130 companies with France’s capital across Kazakhstan.