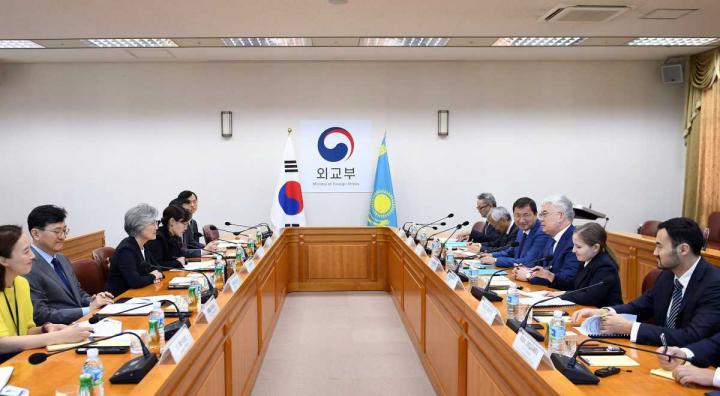 The meetings saw the discussions about the issues of bilateral cooperation and international agenda, including the relation in political, trade and economic, investment, social, cultural and humanitarian and other spheres as well as the situation on the Korean peninsula.

This year marks the 10 years since the establishment of the Kazakhstan-South Korea partnership and the April this year state visit of Korean President Moon-Jae-in in Kazakhstan demonstrates the two States’ intention to deepen the relations.

“Your country has had successes in liberating the economy with First Kazakh President Nursultan Nazarbayev at the helm and not it will thrive. We are willing to develop multilateral cooperation with Kazakhstan,” South Korean Prime Minister Lee Nak-yeon said.

The meeting featured the discussion on the preparations for the 4th Meeting of the Speakers of Parliament of the Eurasian countries themed “Great Eurasia: Dialogue. Trust. Partnership” initiated by Korea and Russia, with National Assembly Speaker Moon Hee-sang confirming his participation in the meeting, to take place on 23-24 September this year in Nur-Sultan.

Former UN Secretary General BanKi-moon congratulated Kassym-Jomart Tokayev on his election as the President, noting that he was among brilliant representatives of Kazakhstan in the UN with whom Ban Ki-moon happened to work.

The Kazakh Foreign Minister outlined that Kazakhstan pays special attention to the comprehensive development of cooperation with Korea. Both sides went over the upcoming events, in particular the Central Asia-Korean Republic Forum, scheduled for October this year in Kazakhstan.

2018 saw the mutual trade turnover reach $4 billion, and in the first half-year of 2019 the turnover has totalled at $2.7 billion, up by two times over the same period of last year.

The Korean side was informed about the country’s investment promotion policy and asked to invest in the Kazakh economy. In the period fr om 2005 to 2019 Korea invested over $5.3 billion in Kazakhstan.