Kazakh Senators met with the President of Tatarstan

Askar Shakirov, deputy speaker of the Senate of the Kazakh Parliament, and a number of senators met with the President of the Republic of Tatarstan, Rustam Minnikhanov, at the Kazan Kremlin, the Senate press service informs. 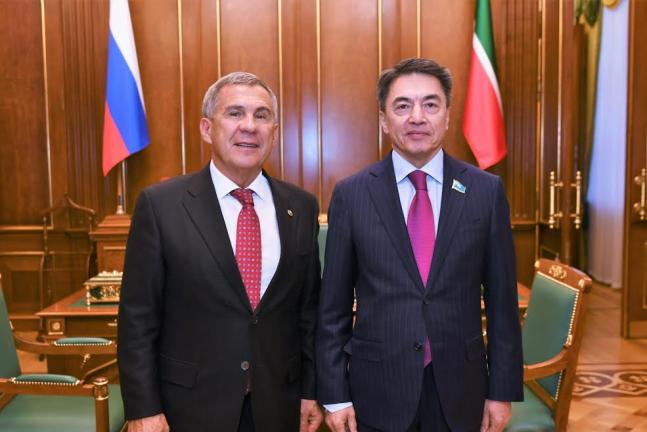 The meeting was also attended by the co-chair of the Cooperation Commission between the Federation Council of the Federal Assembly of the Russian Federation Ilyas Umakhanov, Chairman of the State Council of the Republic of Tatarstan Farid Mukhametshin, senators Mukhtar Kul-Muhammed, Olga Perepechina, Talgat Musabayev, Vladimir Volkov.

Opening the meeting, the President of Tatarstan noted that it is very important to develop cooperation between the countries at the inter-parliamentary level.

In turn, the deputy chairman stressed that Kazakhstan is interested in developing dynamic cooperation with the Republic of Tatarstan, which is one of the leading and economically developed constituent entities of the Russian Federation.

“Our peoples share common historical and cultural roots. Today, relations between Kazakhstan and Tatarstan demonstrate high dynamics of development in all areas,” said the vice speaker.

The issues of opening suspended direct flights Nur-Sultan-Kazan, further development of bilateral trade, expanding cooperation in science and education were discussed during the meeting. Today, more than 1300 Kazakhstani students study at the universities of Tatarstan.