At a meeting of the Senate of the Parliament, the Protocol on Amending the Lease Agreement for the Baikonur Complex between the Governments of Kazakhstan and the Russian Federation of 10 December 1994 has been ratified, the Senate press service informs. 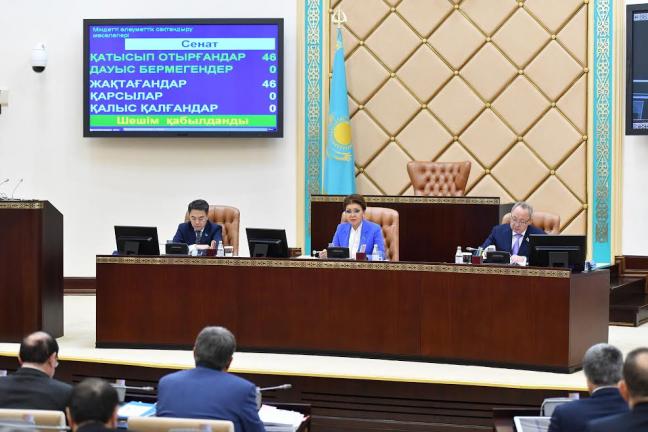 The Protocol signed in Chelyabinsk on 9 November 2017, provides for the return by the Russian Federation of leased land plots with a total area of ​​11.6 thousand hectares to the Republic of Kazakhstan.

According to Aidarbek Saparov, First Deputy Minister of Agriculture, who submitted the document, 4 land plots are being withdrawn from the lease.

“The returned land will be redistributed for the construction of the Western Europe – Western China international transit corridor, the Almaty – Moscow railway, for the linear part of the Beineu – Shymkent gas pipeline and the development of the Toretam village of the Karmakshynsky district of Kyzylorda region,” he noted.

Also at the meeting, the Treaty between Kazakhstan and Mongolia on the transfer of convicted persons was ratified.

The agreement is aimed at strengthening legal cooperation in criminal legal relations between Kazakhstan and Mongolia.

Speaking at the meeting, Senator Andrey Lukin stressed that the presence of such international legal instruments would certainly facilitate the further fate of the compatriots convicted outside Kazakhstan, since their detention in correctional institutions of a foreign country impedes their communication with relatives, and also has a language barrier .

Kazakhstan has concluded similar agreements with 21 countries of the world, in particular with Ukraine, China, Turkey, the United Arab Emirates, etc.