At the meeting on the capital city, Kazakh President Kassym-Jomart Tokayev accentuated slowing investment in the capital over the past 10 years. The Head of State directed the Mayor’s Office and the Foreign Ministry to step up the work and produce clear results in the near future, the Akorda press service informs. 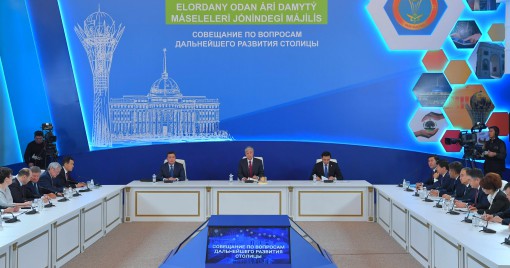 “Nur-Sultan needs to turn into a city with a favourable economic and business environment. Therefore, it is essential to encourage investment,” the President said.

“Equity construction issues need a speedy resolution. 49 housing facilities are considered problematic, with 13.5 thousand shareholders are waiting for their completion,” the Head of State said.

The President has pointed out to delays in timely completion of energy facilities. He referred to delays in bringing into operation the CHP plant-3, its construction began in 2010 and the completion was scheduled for the present year. Kassym-Jomart Tokayev also criticized the city’s failure to connect to the Saryarka gas pipeline.

The Head of State also attached attention to the issue relating to connection to engineering networks, which is crippling for business development.

“Land is often put up for auction without technical conditions for connecting to communications. Sometimes the previously prescribed technical conditions are changed to others in the course of construction. This is an unacceptable situation. Allocated sites should be with ready-made connections to all networks,” the President instructed.

The Kazakh President also noted the importance of increasing the share of non-cash payments, currently accounting for 9%.

“This problem not only causes inconvenience to residents and visitors of the city, but also leads to the growth of the “shadow economy”. The Ministry of Finance, together with the Mayor’s Office, needs to take the presence of cash registers and card terminals at retail outlets in the city and the service sector, under strict control,” the Head of State instructed.

The President focused on the high cost of food and other everyday products. In his opinion, the high prices for them testify to the weakness of the infrastructure and food belt of the city, and the shortage of trading places.

He accentuated the improvement of the social well-being of residents of the capital. According to the Head of State, the annual population growth in the city against the background of inadequate control over internal migration processes leads to an increase in the burden on social infrastructure, primarily medicine and education.

Kassym-Jomart Tokayev also emphasized the need to improve the quality of medical services. In particular, he considers unacceptable the emergency condition of the Central Railway Hospital, the overhaul of the building of which has not been done for 60 years.

In addition, the Head of State instructed to take measures to increase the availability of sports facilities for residents of the city, and to carry out the reconstruction of the sports complexes “Kazakhstan” and “Tolkyn”.

The President focused on providing the most comfortable conditions for people in the capital. According to the President, Nur-Sultan should develop on the principle of a “city without outskirts”. The construction and repair of roads, the implementation of central communications, street lighting on the outskirts, including in the Michurino, International and Kuygenzhar residential districts are essential.

Kassym-Jomart Tokayev also dwelled on the issue of ensuring mobility of citizens. In this context, the Head of State seriously criticized the construction of light rail (LRT).

“I instruct the Government and the Mayor’s Office to set specific deadlines for the resumption of work and the completion of the first phase of the LRT, as well as determine the schedule and mechanism for the implementation of the second stage,” the President said.

The Head of State instructed the Government and the Mayor’s Office to take measures to ensure the efficient operation of the city’s intellectual transport system in order to solve the problem of traffic congestion. In particular, to unload the streets of Saraishyk and Saryarka, Kassym-Jomart Tokayev proposed to build a bridge across the Yesil River to Tauelsizdіk Avenue.

The President said that Nur-Sultan should continue to develop as an international center that can ensure the availability of services in English.

“It is necessary to ensure access for foreign experts and investors to public services on the principle of "one window" in English. For that purpose, the Mayor’s Office needs to use the resource and experience of the Expat Center of the Astana International Financial Center,” the Head of State said.

Another important condition for the capital’s dynamic development is the safety of citizens, according to Kassym-Jomart Tokayev.

“This year has seen 14 accidents related to children falling from windows and balconies. I consider it necessary to strengthen specific safety parameters in building codes,” the President said.

The Head of State also dwelled on other problems important for the capital’s development and gave some instructions.