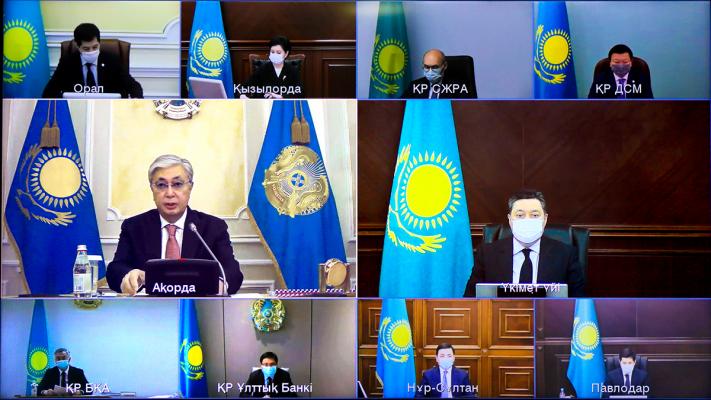 Addressing the government cabinet and the head of the state, Kazakh Prime Minister Askar Mamin said the government prepared the National Development Plan until 2025.

The government set the task to implement 112 projects in 2021 amounting to 2 trillion tenge (US$4.75 billion). 45 projects are in agriculture, 19 in metallurgy and 12 in construction industry.

Tokayev said boosting competitiveness must be a priority for the government.

“The economy currently suffers not only from the big state presence, but also from noncompetitive actions of private monopolists. I instruct the Agency for Protection and Development of Competitions to analyze their feasibility. Currently, there are nearly 150 of them,” said the head of the state.

He instructed the government to submit proposals to address this issue by June 1 to “ensure equal conditions for all market players.”

The work to attract investments will also be proactive, according to Mamin.

“Amid the growing global competitions for investments, countries are taking comprehensive measures to strengthen investment competitiveness. We will focus on proactive and target attraction of investments,” said Mamin.

The government prepared a list of projects worth 47 trillion tenge (US$111.57 billion) and will select large projects to sign strategic investment contracts with them that offer preferential terms to do business in the country.

“Stability of the legislation will be guaranteed and the work will continue to enhance public private partnership mechanism. 65 country investment programs were developed to strengthen economic diplomacy,” Mamin explained.

Tokayev, however, stressed the importance of reforming the investment policies.

"One of the main problems is discrepancy between the actions of ministries, akimats, national committees and companies. The country has a complex multilevel investment management. I instruct the Deputy Prime Minister - Minister of Foreign Affairs to make specific proposals to reform the investment management system by the end of February," said Tokayev.

“The government and the National Chamber of Entrepreneurs will have to develop new measures taking into account the requirements of this organization. I have always said that the state will do its best to support good businesses," said Tokayev.

He also instructed to create the new Agency of Fight against Economic Offences that will focus on reducing the shadow economy. By 2025, it should not exceed 15 percent, he said.
автор: