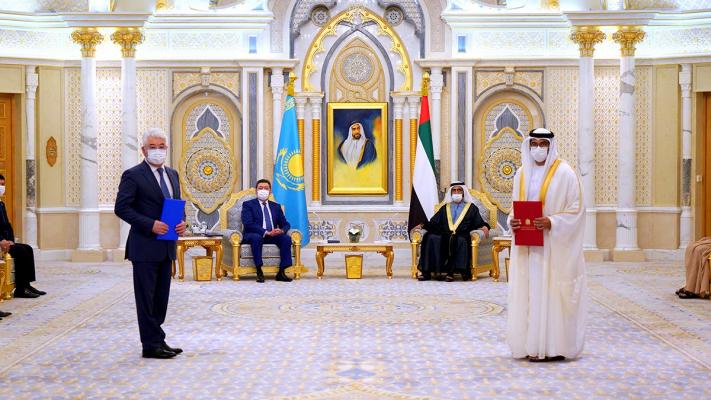 The sides discussed the implementation of previously reached agreements and the prospects for bilateral cooperation in trade and economic, financial and investment, transport and logistics, agro-industrial, tourism, space, mining and metallurgical, and energy sectors.

The sides saw the signing of 17 intergovernmental and commercial agreements between Kazakhstan and the UAE on implementation of joint projects on construction of poultry farms and dairy farms, production and processing of fruits and mushrooms, cooperation in mining and geological exploration, creation of an industrial Park in Ekibastuz industrial zone, development of a tourism complex in Katon-Karagai area in East Kazakhstan region, as well as opening of production of electric car components in Kazakhstan.

The UAE will also participate in the Karaganda Region's water supply and sewage projects, which will include the transfer of advanced technologies and subsequent localisation of production in Kazakhstan.

To finance agricultural projects and boost cooperation in this sector, Kazakhstan and the UAE will set up a joint fund with a total capital of $100 million.

The total amount of investments expected in Kazakhstan's economy with the launch of these projects is estimated at nearly $2.2 billion.

“Investment projects envisage the creation of new productions with high added value and profitability, as well as high demand potential in the domestic and potential foreign markets. Their implementation will allow creating new quality jobs in Kazakhstan and introducing advanced technologies and practices,” said the press service.

The Prime Minister was briefed on the ongoing projects in Masdar City known for its aspiration to become one of the world’s most sustainable cities.