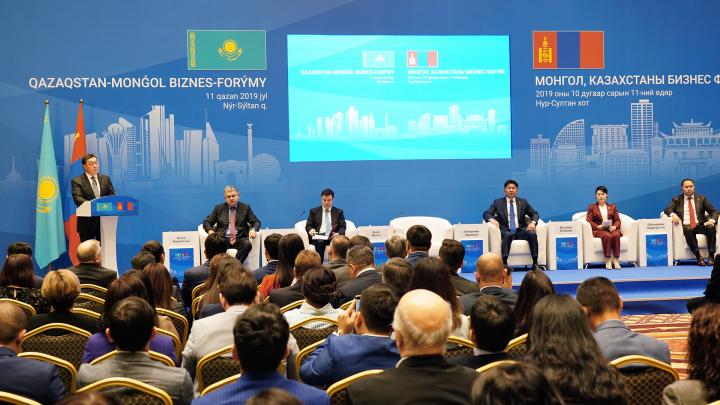 According to the Kazakh Premier, Kazakhstan pays great attention to the development of economic and trade relations with Mongolia, stressing the part the Forum is playing in enhancing bilateral links.

“The development of Kazakh-Mongolian relations is one of the main directions of the policy of First Kazakh President, National Leader Nursultan Nazarbayev. Kazakh President Kassym-Jomart Tokayev continues the National Leader’s foreign policy and focuses on the relations among Mongolia and Kazakhstan. Such a meeting between both countries’ business representatives is the great opportunity for upgrading the historically established trade links. We need to increase our bilateral trade turnover, bringing our economic relations to a new level”, Askar Mamin urged both countries’ businesspeople.

The two sides pledged to adopt measures to fully realize the capacity of the bilateral relations, with a focus on investment cooperation in spheres as logistics, constriction and agriculture.

The previous year saw the trade turnover between Kazakhstan and Mongolia standing at $80 million.

According to the Kazakh Prime Minister, two road maps are about to be drawn up to further promote the trade and economic relation, and implement joint investment projects.

“There are the plans to increase Kazakhstan’s foreign trade turnover to $100 billion this year, thus enhancing machinery, logistics, construction, trade sector of Kazakhstan. In June this year, Kazakhstan’s SCAT airline established regular direct flights between the capitals of the two countries. Mongolia’s national air company is also about to run flights en route Almaty-Ulaanbaatar-Almaty, contributing to the trade and economic, links between businesspersons, tourism development”, he said.

He went on to say that Kazakhstan has a huge transit potential, with the country being the bridge between Europe and Asia thanks to its developed road infrastructure.

The Kazakh Premier has pointed out that both governments have a common task to present support to agricultural producers in entering foreign markets. In so doing, it is essential to develop the two countries’ logistics.

“To date, there are all necessary conditions to do business in Kazakhstan as total foreign investments worth over $300 billion have been channeled into the Kazakh economy since the first years of independence, including $24.5 billion in last year, thus demonstrating investors’ trust and the country’s commitment to investment attraction. In the World Bank’s Doing Business rankings Kazakhstan has been put in 28th spot from total 190 countries. The country’s position in the recent Global Competitiveness Index is 55th. During 9 months of this year the Kazakh economic growth has equaled 4.3%”, he said.

The Kazakh Prime Minister has proposed Mongolian businesspersons to turn to the Astana International Financial Centre to develop trade and investment cooperation. According to him, the AIFC is one of the major projects of the country.

“The Astana International Financial Centre holds a chance of becoming the leading centre for providing financial services on international level for the entire region. To that end, the role of joint enterprises is pivotal”, he said.

The Kazakh Prime Minister went on to say that Kazakhstan is willing to carry out construction or infrastructural works in Mongolia, attributing to the country’s possibilities in producing building materials and construction works.

Ukhnaagiin Khürelsükh, Mongolian Prime Minister, on his part, stressed that reciprocal visits of the citizens and collaboration among business representatives play significant part in developing the bilateral cooperation.

“The holding of the Kazakh-Mongolian Business Forum will give momentum to economic and business relations among our countries”, the Mongolian Premier said, while expressing his gratitude for organizing the event to Mongolia’s National Commence Chamber and Kazakhstan’s national company KazakhInvest.

He went on to state that both countries’ current development level has been reached without any economic difficulties when switching to a market economy.

“Kazakhstan managed to achieve the great economic achievements, therefore creating the stable conditions for businesses, and raising its competitiveness. Both countries see the increase in investment, which creates conditions for running business and restoring trust”, he said.

According to him, Mongolia is greatly dependent on the mining sector, forcing to diversify the economy, support other sectors on strategic level, and create favourable conditions for investment.

“Businesspersons, entrepreneurs play an important role in increasing the trade turnover between the countries”, he said, adding that Kazakh business representatives will be welcomed in Mongolia with full support.

He called for the further development of the traditionally established areas of cooperation among both countries. He proposed to establish joint facilities in the western part of Mongolia to process meat, and export the products to foreign countries.

Both countries’ Premiers have signed documents following their speeches.

The Kazakh-Mongolian Business Forum has gathered around 200 people, among them, both countries’ businesspersons, and representatives of authorized national companies under the ministries. It also featured B2B meetings and talks with potential partners.