Kazakhstan and the United States of America intend to develop an expanded strategic partnership, characterized by multifaceted interaction across the entire spectrum of bilateral relations. This was the main leitmotif of the negotiations of Kazakh Foreign Minister Mukhtar Tleuberdi, who is on a two-day official visit to Washington at the invitation of Secretary of State Mike Pompeo, the Kazakh foreign ministry informs. 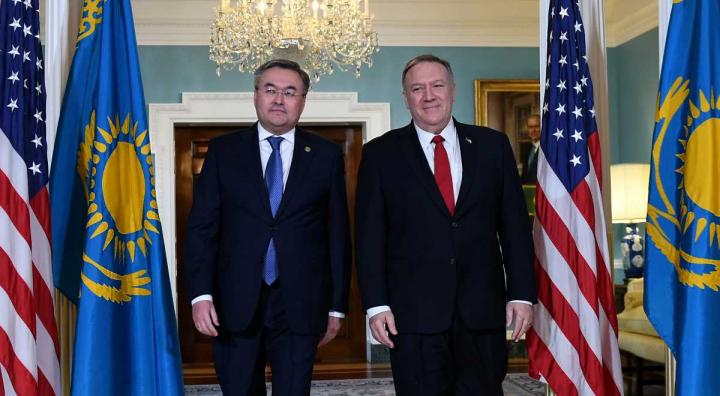 The Kazakh foreign ministry’s visit to Washington began at the State Department with a bilateral meeting with his colleague Mike Pompeo.

“We attach great importance to the further expansion of our cooperation with the United States, which is developing in the spirit of trust and mutual understanding. Thanks to this, Kazakhstan and the United States have reached the level of an expanded strategic partnership, which was consolidated following the official visit of the First President of Kazakhstan, Elbasy Nursultan Nazarbayev, to Washington in January 2018,” the Kazakh Foreign Minister said.

Kazakhstan’s commitment to further strengthen cooperation with the United States was emphasized during the visit of Head of State Kassym-Jomart Tokayev to New York in September this year.

“Kazakhstan is a leader in Central Asia, the United States relies on as a reliable partner in the region. We consider your country a key partner in maintaining regional security,” US Secretary of State Mike Pompeo said.

On the same day, the Kazakh minister held talks with the leadership of the National Security Council and US congressmen from the "group of friends" of Kazakhstan.

Given the priority of economic diplomacy in the foreign policy agenda, the foreign minister visited the World Bank headquarters in Washington. During a meeting with Vice President for Europe and Central Asia Cyril Muller, the parties discussed topical issues of bilateral cooperation between Kazakhstan and the financial institutions of the Bank's group. Cyril Muller said that the World Bank Board of Directors approved the country strategy of the World Bank’s partnership with Kazakhstan for 2020-2025. The parties also discussed a joint project in the field of agricultural development for the period from 2020-24.

At the end of 2018, US investment in Kazakhstan set a new absolute record, reaching $5.3B. In general, gross foreign direct investment from the United States to the economy of Kazakhstan since 2005 amounted to about $40B.

As part of the development of cultural and humanitarian ties between the two countries, on the eve of the celebration of the 175th anniversary of Abai Qunanbaiuly, the foreign minister visited the Library of Congress, where the two-volume anthology of Kazakh literature and the words of the edification of the great poet were solemnly presented.

Established in 1800, the Library of Congress is the largest in the world with approximately 38 million books and other printed materials in more than 450 languages.