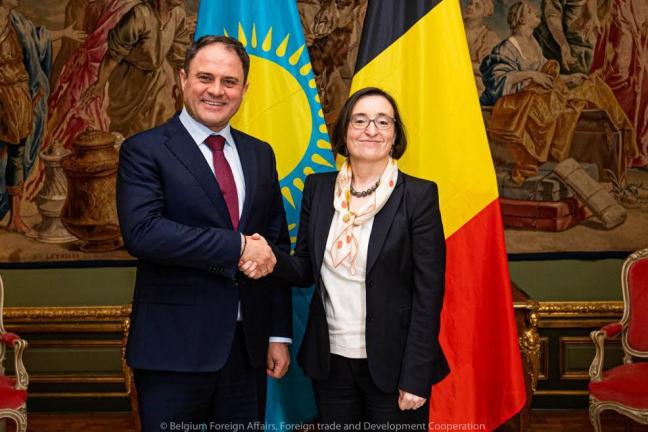 The Kazakh delegation was led by Deputy Minister of Foreign Affairs of the Republic of Kazakhstan Roman Vasilenko, and the Belgian delegation was headed by Anick Van Calster, Director General of the Directorate for Bilateral Relations of the Belgian Foreign Ministry, with both discussing in detail wider political, economic, cultural and humanitarian cooperation issues, as well as international issues.

Discussing the ways to overcome contemporary global challenges, Kazakh deputy foreign minister spoke about the initiative of First President of Kazakhstan – National Leader Nursultan Nazarbayev to establish “Three Dialogues” at the global level, at the level of Eurasia and international economic organizations.

The Kazakh diplomat also informed the interlocutor about the progress in implementing institutional reforms in Kazakhstan aimed at ensuring the rule of law, the main priorities and directions of the state-of-the-nation address of Head of State Kassym-Jomart Tokayev “Constructive public dialogue - the basis of stability and prosperity of Kazakhstan”, the implementation of the Nurly Zhol program and ongoing social and economic reforms , as well as reforms of the judicial system and law enforcement bodies.

In turn, Anick Van Calster spoke with satisfaction about the favorable trend in the development of Kazakh-Belgian relations in all areas since her last visit in July 2017 to Nur-Sultan. In particular, the meeting of First President Nursultan Nazarbayev and the King of the Belgians Philip in October 2018 in Brussels gave a new impetus to bilateral partnership.

As for economic diplomacy, the parties confirmed the positive growth dynamics and marked the successful interaction in the field of energy, agriculture, medical waste processing, etc. The joint projects were launched in Kazakhstan with such Belgian companies as John Cockerill, Carmeuse, Orfit, etc. Belgium is already one of the largest investors in the economy of Kazakhstan - Belgian companies account for more than $7B in direct investment in Kazakhstan. Director General of the Directorate for Bilateral Relations of the Belgian Foreign Ministry emphasized the effectiveness of the biennial business mission of Belgian enterprises under the leadership of the Wallonia Foreign Trade and Investment Agency (AWEX) and the Investment and Export Promotion Agency of Flanders FIT to Kazakhstan. Given the successful experience of previous economic visits to Kazakhstan, the Belgian side is considering the issue of conducting such missions on an annual basis.

While discussing the investment climate in Kazakhstan, Roman Vasilenko spoke about the Coordination Council chaired by the Kazakh Prime Minister, a three-tier system for attracting and supporting foreign investment, the activities of KazakhInvest. The Kazakh delegation drew special attention to the prospects for developing business ties on the basis of the Astana International Financial Center.

In the framework of cooperation with the European Union, the parties noted the importance of the early entry into force of the Enhanced Partnership and Cooperation Agreement and the practical implementation of the new EU Strategy for Central Asia, adopted in June 2019.

The meeting also saw a thorough exchange of views on cooperation in facilitating the reconstruction of Afghanistan. The Belgian side appreciated the efforts and contribution of Kazakhstan by providing humanitarian, technical and educational assistance to the country. The Kazakh deputy foreign minister informed his colleagues about the initiatives of Kazakhstan to restore peace and security in Afghanistan, the launch of the EU Program for the Education of Afghan Girls in Kazakhstan and Uzbekistan, the inauguration ceremony of which was held on the same day in Brussels.

Of particular interest to the Belgian side was the topic of cooperation on international security issues. The Kazakhstan diplomat spoke in detail about the Zhusan operation to return Kazakh citizens from the combat zones of Syria and Iraq. The parties expressed their intention to exchange the experiences between the relevant services of Kazakhstan and Belgium.

At the end of the meeting the parties reiterated their intention to make joint efforts for the further qualitative development and expansion of Kazakh-Belgian relations on all fronts.