The CAA International (CAAi), which is a technical cooperation arm of the UK Civil Aviation Authority (UK CAA), has been awarded a new consultancy project to help the Kazakh aviation regulator adopt a new aviation oversight model based on one used in the UK. The new regulatory system will support Kazakhstan’s air transport sector growth and provide a foundation for Kazakhstan’s aviation industry to become a world player, Strategy2050.kz informs referring to the press service of the Kazakh Aviation Administration. 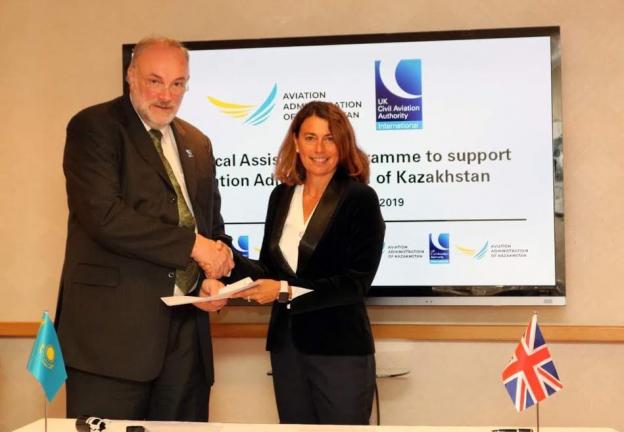 The project is in line with the 100 Concrete Steps national development initiative announced by first Kazakh President Nursultan Nazarbayev in 2015, calling for the widespread economic, social and political reform. The step 68 specifies the improvement of the air transport management system to increase the attractiveness of air transport. This is a fundamentally new approach to ensuring flights safety in the country in compliance with the best international practices of industry regulation.

This approach is being introduced in Kazakhstan for the first time. Over the past one and a half years, the Kazakh Ministry of Industry and Infrastructural Development’s Civil Aviation Committee has developed and introduced the appropriate amendments to the basic law of civil aviation and 61 by-laws and normative legal acts. The initiative also meant the creation of the Aviation Administration of Kazakhstan (AAK), further established in August 2019.

Within the year, the UK CAA regulatory experts are about to assist the AAK to review Kazakhstan’s primary legalization and propose ways to further incorporate EASA/EU provisions and alignments with the UK CAA model. The second workstream will focus on the AKK’s organizational design and provide recommendations in accordance with the UK CAA model. The CAAi has also been tasked with conducting a Training Needs Analysis of the AAK’s technical staff.

“We are delighted to be working with our counterparts in Kazakhstan, and our team is fully committed to supporting the AAK. It’s impressive to see Kazakhstan thinking big, and it’s exciting for us to play an important part in the ongoing improvement of its air transport sector. Kazakhstan is located between two huge aviation markets so there is great potential for attracting more in transit connections, as well as expanding its international network. The upgrade of Kazakhstan’s regulatory framework will build the solid foundation needed for overseeing this, allowing Kazakhstan to generate more of the socioeconomic benefits aviation brings,” says Mattijs Smith, Head of International Development at the CAAi.

According to Beibut Atamkulov, Minister of Industry and Infrastructure Development of Kazakhstan, technical control, supervision of airlines and aircraft, and personnel training in compliance with the ICAO standards are among the main functions of the organization.

“The British Agency’s top European experts are about to provide Kazakhstan with technical support for the implementation of the European safety standards,” Beibut Atamkulov said.

“The AAK’s establishment will expedite the transition of Kazakhstan to the international best practices in the field of civil aviation. The AAK will carry out control and supervision in such an important area as flight safety. The contract will help the AAK achieve its goal with high indicators of over 80% safety levels as per the ICAO standards,” Peter Griffiths said.

British Ambassador Michael Gifford and his Department of International Trade (DIT) team in Nur-Sultan provided ongoing support in securing the project for the two parties.

“The UK is an unrivaled repository of excellence in many spheres, and the adoption of the UK’s model of civil aviation by Kazakhstan shows that the government continues to look to the UK for expertise and support for economic reform. The British Government as a whole continues to demonstrate its commitment to strengthening our relations with Kazakhstan, and we are proud to witness the launch of the new initiative, which will support Kazakhstan’s air transport sector growth and provide a foundation for Kazakhstan’s aviation industry to become a world player,” Edmund Marler, Director at DIT Kazakhstan, said

The project’s phase one is due to commence in October 2019, further followed by phase two involving the development of a five-year strategic and economic sustainability plan.