The Kazakh Ambassador to Azerbaijan, Serzhan Abdykarimov, had a meeting with the Azerbaijani Minister of Transport, Communication and High Technologies, Ramin Guluzade, on 28 November 2019, the Foreign Kazakh Ministry has informed. 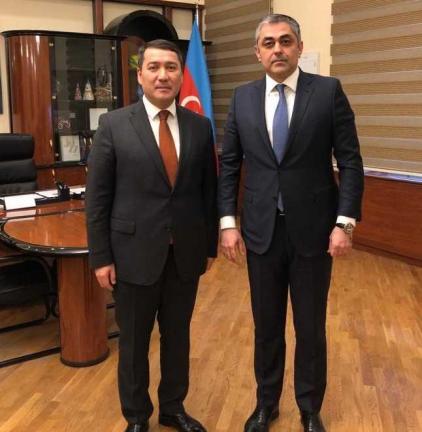 The sides discussed issues of bilateral cooperation in the field of railway transport and air traffic, digitalization and data transit as part of the construction of a fiber optic communication line under the Caspian Sea between Kazakhstan and Azerbaijan, the protocol of the Intergovernmental Commission on Trade and Economic Cooperation’s last meeting, the agenda of the upcoming 14th meeting of the Transport Corridor Europe-Caucasus-Asia Intergovernmental Commission, to take place on December 6 this year in Baku.