Ambassador of Kazakhstan to Turkmenistan Yerkebulan Sapiyev was received by President of Turkmenistan Gurbanguly Berdymukhamedov for delivering his credentials, Strategy2050.kz reported with reference to the press service of the Kazakh Ministry of Foreign Affairs. 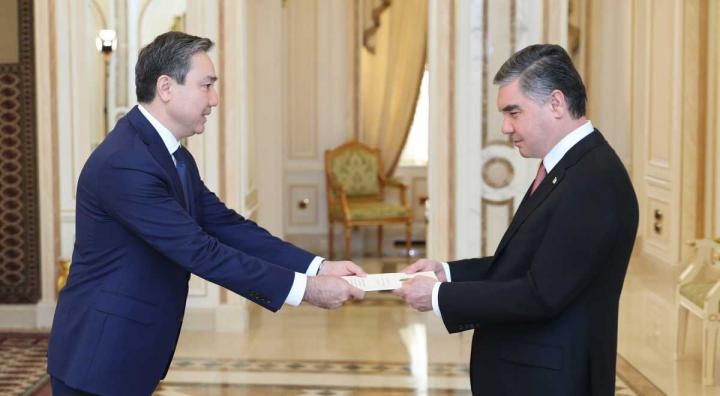 During the meeting in the Oguzkhan Palace, the leader of Turkmenistan noted primordially friendly relations and the atmosphere of mutual trust established between the fraternal countries, as well as the solidarity of the two states on key issues of the regional and global agenda. At the same time, he especially emphasized the significant contribution of First President of Kazakhstan, Yelbasy Nursultan Nazarbayev, to the establishment of bilateral relations and the development of the Kazakh-Turkmen strategic partnership.

The parties also discussed a number of topical issues, including the development of political and diplomatic dialogue, trade and economic cooperation, scientific, technical, cultural and humanitarian interaction between the two countries.

At the end of the meeting, G. Berdymukhamedov conveyed heartfelt wishes to Yelbasy N. Nazarbayev and President of Kazakhstan K. Tokayev. Also he wished the Ambassador successful and fruitful work in order to strengthen Kazakh-Turkmen cooperation.

On the same day, the Kazakh Ambassador met with Deputy Chairman of the Cabinet of Ministers - Minister of Foreign Affairs of Turkmenistan Rashid Meredov to present copies of his credentials.