How the Turkic world celebrates Nauryz

Nauryz is a major holiday celebration not only in Kazakhstan but also in the entire Turkic speaking world. The values in the very essence of the holiday are common to all these countries. Take a look at how Turkic speaking states celebrate the Nauryz holiday in the latest Strategy2050.kz coverage.

Nauryz comes on March 22 with the arrival of spring. The holiday is not religious as its roots go back to the pre-Islamic era. 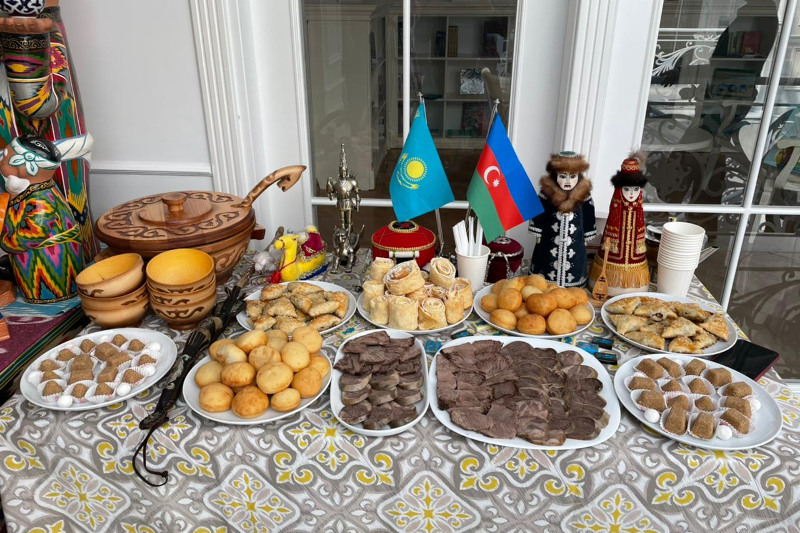 In the nomadic lifestyle of Turkic speaking countries in ancient times overcoming the harsh winter was not an easy task for everyone. Traversing the steppes in freezing temperatures, the one pertinent to this region, turned out to be last for many.

Nauryz is therefore a holiday that brings hope for a better future, a time when families reunite after not seeing each other for a long time. This year, however, this might not seem possible to the existing Covid-19 restrictions.

Nauryz is celebrated in Persian and Turkic-speaking nations. It is a centuries-old tradition, literally meaning new day in Farsi, and spelt Navrus in Uzbek, Nauryz in Kazakh, Novruz in Turkmen, Nooruz in Kyrgyz and Naurozin in Dari.

Nauryz was not celebrated in Kazakhstan at the national level from 1926 until 1988. But after gaining independence in 1991, it becomes widely celebrated.

In 2001, Nauryz was declared a national holiday and has been celebrated three days from March 21 to March 23 since 2009.

Nauryz is usually accompanied by grand festivities, big family gatherings and celebrations in cities and villages. Yurts, which served as home for nomadic Kazakhs, were put on city squares, and dishes prepared to treat the guests.

People prepare days for the holiday and clean the house to welcome spring.

Nauryz is first of all a family holiday. People invite their relatives and friends over to a big dastarkhan (table setting), cook the most delicious dishes, sing songs and play games.

Baursaks, beshbarmak and Nauryz kozhe are prepared by many Kazakh households. Nauryz kozhe is a signature drink of the holiday consisting of seven ingredients, as number seven carries a specific spiritual meaning, including water, meat, salt, milk or yoghurt, one type of grains, chosen from rice, corn or wheat.

This year, however, the pandemic has transformed the celebrations as many events switched to online mode.

“Every year, when spring arrives, we all look forward to this bright holiday. In the last century, there was no opportunity to solemnly celebrate Nauryz meiramy (from 1926 until 1988), but gaining Independence, this integral part of our cultural code was revived. To strengthen the ancient traditions of Nauryz, Elbasy (Kazakhstan’s First President Nursultan Nazarbayev) gave it the status of a state holiday,” said Kazakh President Kassym-Jomart Tokayev in his Nauryz congratulations to the country.

He emphasized the importance of improving the approaches to celebrating Nauryz to make every aspect of its celebration “morally significant for people, contribute to the accomplishment of good deeds, and benefit the country.”

He called on the citizens while celebrating Nauryz, to promote such values as mercy, kindness, mutual support to each other, unity, frugality and environmental friendliness.

“There are many inspiring examples of true nobility, civil solidarity and impressive achievements of our fellow citizens. You know well about them. Thanks to unity, harmony and stability, we have emerged as a successful and progressive country,” he said.

“Nooruz is one of the oldest festivals in the history of mankind, which has been celebrated for thousands of years. The essence of the holiday is the glorification of the renewal of nature, the designation of the close connection between society, people and the environment,” said President of Kyrgyzstan Sadyr Japarov.

Delicious meals are prepared for the holiday, and one of the most prominent dishes in Kyrgyzstan is called sumolok, a type of wheat pudding, referring to a sweet paste made of sprouted wheat, flour and vegetable oil.

It takes quite a long time to cook it, sometimes hours or days. People preparing the meal usually accompany the process with songs as many believe it energizes the food with positive energy.

Similar to kokpar in Kazakhstan, kok boru is a traditional game for Kyrgyzstan. Men on horses, who compete in teams, try to take a goat carcass to the end of a playing field and win the opponent.  Kok boru competitions are widely spread from villages to cities gathering crowds watching the game unfold. 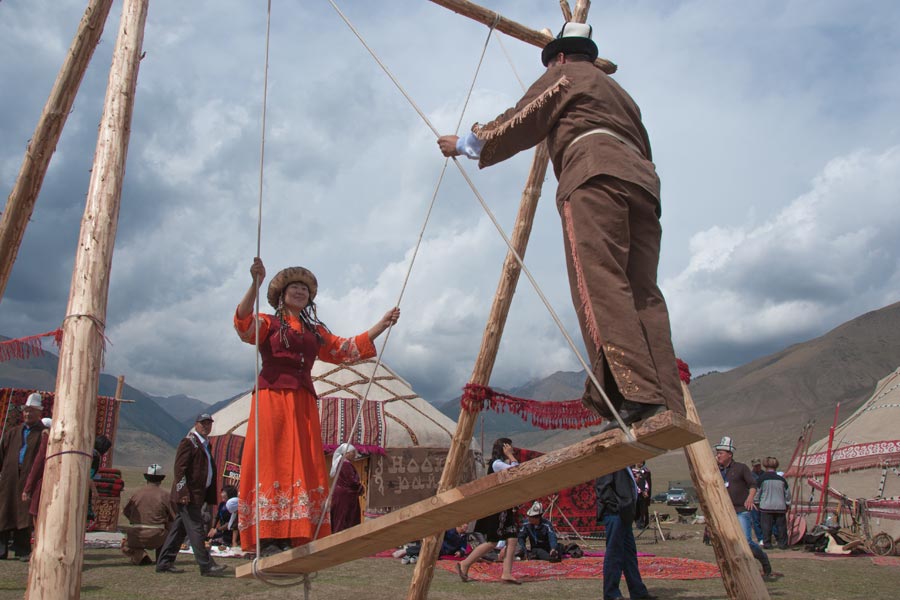 Crowds on streets and city squares grow bigger as the evening comes enjoying the concerts and tasting national dishes near yurt tents usually installed across the city.

“Many centuries ago, our ancestors knew that at this moment the day equals the night, and then the daylight becomes longer and spring works begin. This is how the custom arose from ancient times to celebrate this day considering it sacred,” he said.

In Uzbekistan, Nauryz celebrations continue for several days. How it celebrates the holiday is in many ways similar to its neighbours, as roots of the holiday are common.

People make their wishes on the day, forgive others and try to help those who are in need. They tie their biggest hopes to this day, as it carries a sacred significance and deep meaning signifying the beginning of a new year and major changes in life.

In Uzbekistan, the holiday was also not celebrated up until the nation became independent. 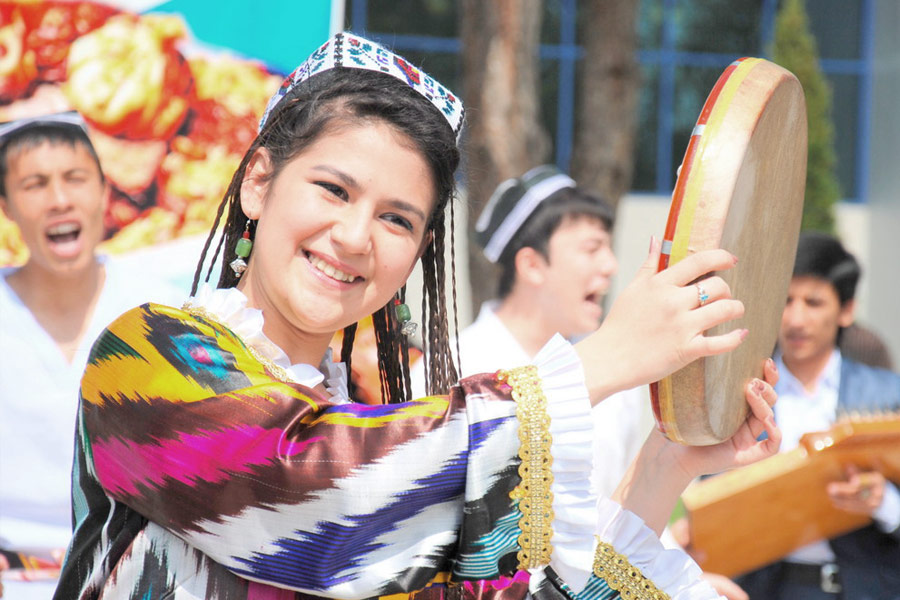 Cooking the most delicious and diverse meals is an integral part of the celebration.  Among dishes that one could see in Uzbek households is also sumalak, a sweet meal that is also common in Kyrgyzstan, nishalda, which refers to a sweet dessert consisting of egg whites whipped with sugar and fragrant roots.

“On Nevruz Day, we wear traditional clothing and dance. Where Nevruz Bayram is celebrated, we light a traditional Nevruz fire and try to jump over this fire, because according to our old beliefs, fire is sacred to us and protects us from bad luck and illness,” said Nurbanu Altunkal from Turkey in an interview for this story.

The celebrations may vary across the country. There is a tradition to cook Nevruziye dessert (Mesir macunu) that goes back to Ottoman time when the palace’s chief physicians and cookers prepared the sweet dish with 41 species considered to have a healing effect.

“In Turkey's Tunceli area,  men go to water reservoirs and rinse their forehead with water believing that this spring water helps their wishes come true. Again, people go to picnics, cook boreks or other tasty dishes and go outside to have fun,” she said. Current joint celebrations

The delegates of Turkic speaking countries, Azerbaijan, Kazakhstan, Kyrgyzstan, Uzbekistan and Turkey recently gathered in Baku to celebrate the Nauryz festive day. The event comes ahead of the unofficial summit of the Cooperation Council of Turkic-speaking States (Turkic Council) initiated by Kazakhstan’s First President Nursultan Nazarbayev and scheduled to be held in Turkestan on March 31. 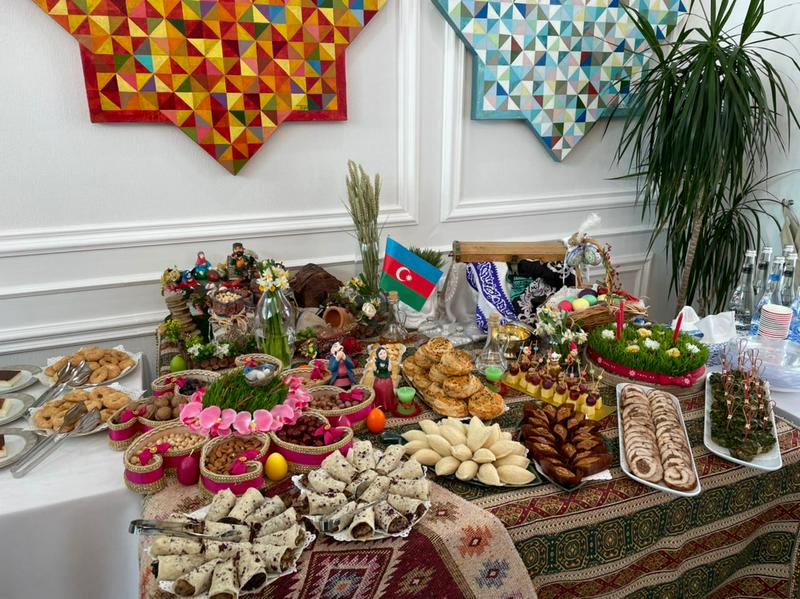 “The day when winter is replaced by the long-awaited spring warmth has been celebrated for centuries by all Turkic peoples. In Kazakhstan, it is called Nauryz meiramy (holiday). President Kassym-Jomart Tokayev instructed his government to develop a new concept for celebrating Nauryz to enrich the essence of the spring holiday,” said Serzhan Abdykarimov, Kazakh Ambassador to Turkey.

The event, which featured a display of each country’s national dishes, songs and concert, was organized by the  Turkic Culture and Heritage Foundation.