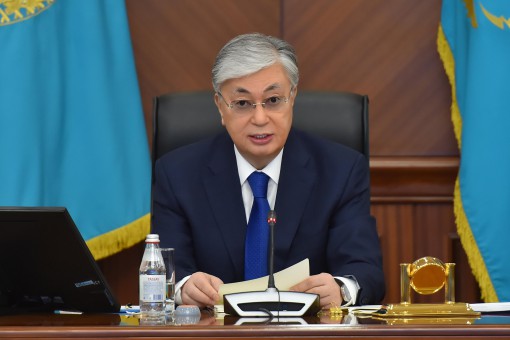 Opening the meeting, Kassym-Jomart Tokayev noted that the Government and the Parliament worked together to implement the election program and the address to the people of Kazakhstan. There were important programs adopted, and the planned macroeconomic indicators were achieved. According to the Head of State, the Government ensures the fulfillment of the President’s instructions, however the questions of the quality of economic development remain.

“Lending to the economy stagnates: for 11 months of 2019, the volume of the loan portfolio to GDP decreased from 23% to 22%. Last year, unfortunately, we had the highest inflation among the Eurasian Economic Union countries. The big problem is the lack of a significant increase in labor productivity. The share of non-oil exports is growing slowly,” the Head of State said.

The President outlined his principled position, that is, the goals and objectives set by Elbasy remain unchanged, including Strategy 2050, the Strategic Plan for the Development of the Country until 2025, 100 Steps of the Plan of the Nation. Nevertheless, the Head of State pointed out that the Government needs to prepare a program of deep radical reforms of the country's economy.

“We need a new economic course that will give a clear vision of key problems and methods for solving them. Reforms, as you know, require will and determination. That is what I urge the Government. Now the main decisions are being taken by the state apparatus slowly, with numerous normative acts in mind, with reference to the need for interagency coordination. It’s already impossible to work this way in the conditions of toughening international competition and taking into account the just demands of the people. That means heavy-handed reforms,” Kassym-Jomart Tokayev said.

The President pointed out that an effective, transparent and pragmatic fiscal and industrial policy needs to be built to ensure the protection and development of entrepreneurs, access to sales markets, increasing the productivity of enterprises, increasing the competitiveness and quality of Kazakh products.

The Head of State believes that the fiscal policy needs serious modernization. Its main task is to ensure the stability of budget revenues and the equitable distribution of national income, improve the structure and quality of economic growth. The exemption from taxes of micro and small businesses in order to give an impetus to its development is justified. But widespread tax exemption can lead to serious negative consequences.

“The volume of conditional losses only in the context of free economic zones is more than 2 trillion tenge. An additional 340 billion tenge was invested from the budget in the infrastructure of 13 SEZs. During this period only 170 billion tenge of taxes were received, a total of 18 thousand permanent jobs were created. Almost all free economic zones have problems with high-quality filling, that is, they are poorly managed. I instruct the Government to analyze the whole range of tax preferences provided for their effectiveness and expediency,” the President said.

On behalf of Kassym-Jomart Tokayev, budget expenditures on image events were reduced, 30 billion tenge was optimized. The same work to eliminate unproductive expenses will be carried out in the quasi-public sector.

“I instruct the Government to report on the results by 1 May this year. You should determine the costs that can be postponed. I propose, as a first measure, to declare a long-term moratorium on the costs of acquiring expensive vehicles and furniture, and to hold various forums, seminars, and conferences. Events in our country should bring pronounced practical and ideological benefits,” the Head of State said.

To ensure the security of the domestic market, the President instructed the Government to develop a Trade Policy Program until 2025, develop a National Certification System, restore confidence in national standards, and prepare and adopt the Law “On Technical Regulation” by the end of this year.

According to the Head of State, the practice of repeatedly raising the cost of projects continues, there are problems in the formation of the estimated cost of construction.

“Up to 49% of the purchases in government bodies and from 70% to 90% of the purchases in the quasi-public sector are still carried out from a single source. Procurement should be stopped in non-competitive ways, minimizing the so-called exceptional circumstances. For example, in 8 regions, municipal fleets have been created when there is a sufficient number of private carriers. The government is required to clean up urban passenger traffic. This is an important social issue. The deadline is 2 months,” Kassym-Jomart Tokayev said.

The President also criticized the situation in the agricultural sector. Despite the fact that over the past 5 years more than 2.4 trillion tenge has been allocated to the agro-industrial complex, the share of agriculture in the country's GDP does not exceed 4.5%. The Head of State indicated that it was not possible to unleash the export potential, issues of full-fledged food security of the country remain. The Ministry must create all conditions for the processing of raw materials within the country. Processing and export should be profitable.

“There is the five-year agribusiness development program. It spells out goals, objectives, specific production and economic indicators of the industry. That is, the Government has decided on plans and priorities. At the same time, support measures, that is, subsidies change every year! Over the past 5 years, the amount amounted to more than 2 trillion tenge, while the subsidies changed 47 times. I instructed the Government to ensure the stability of state support measures and increase their effectiveness. This order has not yet been completed. I look forward to decisions and specific proposals,” Kassym-Jomart Tokayev said.

In 2019, social support expenses amounted to 3.5 trillion tenge, or 30% of the total budget. Social protection measures covered almost 4 million Kazakh residents. Under the Bakytty Otbasy and 7-20-25 programs, about 20 thousand Kazakh families received loans. In the foreseeable future, according to the President, it is housing construction that should become a priority in the work of the Government.

“With regard to the use of a part of pension contributions for the purchase of housing and other needs. The first step has been taken in solving this important issue. Our goal is not to give away all the savings now, leaving people without a decent pension. We need to create an incentive to remove salaries from the shadows, so that people begin to require employers to pay pension contributions. The government and the National Bank are starting to implement this reform. Gradually, you should expand the circle of citizens who can be given such an opportunity,” the President said.

The Head of State called on the Government to more carefully work out all its initiatives for social and economic risks. Often the decisions of government bodies cause criticism of citizens, and in some cases lead to social tension. Now a problem with cars imported from the EAEU countries is going on.

“Most of these cars imported into the country are not registered. There are tens of thousands of such vehicles. I instruct the Prosecutor General to give a legal assessment of the situation. To resolve this problem, the Government should, on a monthly basis, as a one-time exercise, provide for the temporary registration of cars imported as of 1 February 2020 from the EAEU countries for personal use. Registration for these cars will be valid until 1 March 2021. In this case, citizens must pay the registration fee and state duty. Temporary registration should be carried out without the right of alienation and transfer to use and disposal to other persons. Until 1 March 2021, the car owners must pay customs duties and utilization fees putting the car on a permanent register, or either take the cars out of the country or take another action not prohibited by law,” Kassym-Jomart Tokayev said.

The Head of State instructed the Government to take measures to limit the further import and operation of cars in violation of the laws of the country.

The President decided not to announce public reprimands and warnings hoping that members of the Government and governors will correct the shortcomings themselves.